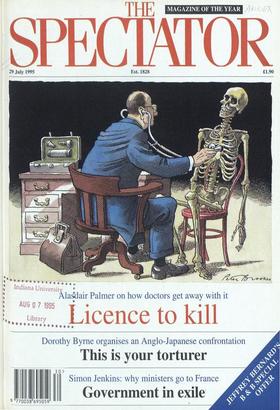 PORTRAIT OF THE WEEK `Move along there, haven't you seen

genocide before?' S ir Patrick Mayhew, the Secretary of State for Northern Ireland, admitted that he had held a secret meeting with Mr Ger- ard Adams, the leader of Sinn Fein,...

No money. No power. No sex. Who'd become a Conservative MP today? BORIS JOHNSON Y ou have to wonder why anyone should want to replace them, these great men now giving up their...

IAN JACK Y ou may be aware of a kind of writing called 'the new non-fiction', a phrase cred- ited to the editrix of Esquire, and on first sight about as specific and meaningful...

`Our boys' in Bosnia are admirable and brave. That doesn't mean they are doing the right thing CHARLES MOORE I n current discussion of the Decline of Britain question, it is...

NOW THEN, WHAT SEEMS TO BE THE TROUBLE?

Alasdair Palmer reveals how the medical profession is often better at looking after itself than after its patients LAST WEEK, as a group of doctors were chatting, a particular...

persist.. . THE STAFF of Air France chose the precise moment of my arrival at Charles de Gaulle airport last week to go on strike. I make no claim for a causal con- nection —...

IT IS NOT easy to see what some words are meant to mean. Take literally. It is widely used and widely abused. Poor Emma Nicholson was giving a tribute for some reason to Douglas...

THIS IS YOUR TORTURER

Dorothy Byrne arranges a meeting between two Japanese war criminals and the Britons they brutalised Tokyo ONE HAS certain expectations of a con- victed war criminal's...

THE SPANISH ARE DIFFERENT

Simon Courtauld meets Spain's biggest fishing-boat owner, and learns about a nation obsessed with the sea Vigo THE 3,000-ton trawler Sil had docked the previous night beneath...

THIS MAN IS DANGEROUS

As British troops confront the Bosnian Serbs, Robin Harris questions the suitability of Malcolm Rifkind for the Foreign Secretaryship EVEN HIS admirers would concede that the...

Old age, death and apotheosis of a well-dressed poet PAUL JOHNSON W e live in a vale of tears made bear- able by friendship. But the trouble with friends is that they die,...

Harassed by alligators, Kenneth Clarke forgets to drain the swamp CHRISTOPHER F1LDES T he feeling is familiar. You set off to Florida with a challenging job and high hopes....

Sir: On 3 June you reported on the termi- nation of my cartoon strip 'The World of Lily Wong' by the Hong Kong newspaper South China Morning Post ('We were reluc- tant to rig...

Sir: The two commonest defences of bureaucrats under siege are: a) set up a committee; b) pay for a poll. The first wastes time, the second wastes money; but both shelve the...

Sir: Paul Johnson's ravings (And another thing, 22 July) are most illuminating. He is clearly in favour of a Labour government, but that is hardly surprising from a former...

Sir: Simon Courtauld ('Yum yum, pigeons again', 27 May) is quite wrong to suggest that the Royal Society for the Protection of Birds takes a blinkered view of alleged problems...

Sir: Auberon Waugh's article on Bosnia (Another voice, 22 July) displays an atti- tude so original as to deserve the coining of a new term — the verb to anti-pilger. To...

Sir: How very depressing that you feel obliged to have a 'Motoring' column (Arts, 22 July). One expects such as the Daily Telegraph to pander to Britain's overween- ing 'great...

Sir: Why does the liberal establishment feel obliged (Letters, 22 July) to remind us that very many policemen are racists? It is hard- ly helpful to community relations. J.J....

Oh yes, He did

Sir: A.N. Wilson (`The origins of the empty tomb, 15 April) obviously needs a refresher course on the New Testament if he can allege that Jesus never claimed to be the Messiah....

Sir: I entirely agree with Christopher Fildes that a good brake on excess — except for the totally shameless — would be, as he suggests (City and suburban, 15 July), to make...

Nip in the air

Sir: How pleasant as Mr Rankin writes (Letters, 22 July) are the Japanese, polite, controlled, anxious to please. Though some objection might be found to nerve gas on the...

Sir: For collectors of misplaced apostro- phes, a truly magnificent specimen from my local J. Sainsbury for your trophy halls: 'For our customer's convenience, this store is now...

Sir: Who is this wonderful, witty new columnist Carole Morin? Her piece beginning with East Berlin and going on to the Ritz in London (Arts, 15 July) has left me in a good mood...

Politics knows no sleep as MPs go holidaying-for-office SIMON JENKINS T he news that John Major is holidaying in the Dordogne will send a shiver of excitement upstream from...

The good, the bad and the ugly Philip Hensher GEORGE ELIOT by Frederick Karl HarperCollins, £25, pp. 708 A mong the discreditable, riotous, boozing, double-crossing and...

Andro Linklater WARPATHS: TRAVELS OF A MILITARY HISTORIAN IN NORTH AMERICA by John Keegan Hodder & Stoughton, £20, pp. 370 I t is 500 years since the last beaver gave up the...

He was a poet, he was young

The accountant who sailed away

Richard Shone PAUL GAUGUIN: A COMPLETE LIFE by David Sweetman Hodder, £25, pp. 600 A t the notorious Post-Impressionist exhibition in London in 1910, almost the only paintings...

Flings are not what they seem

Heroes in their own lunchtime

(Alfred Wallis, 1855-1942) When they drove him to the workhouse, surf in the sky disturbed its blue. He creaked and rolled like a ship whose wheel had been lashed and then a...

I'm back in the back sometimes now that Ben drives. I peer out between the head-rests, uneasy at first at how fast it all feels. Eighteen already, and coming up so close to the...

The tusheries survive, the mystery remains

original and amusing stuff, brightly per- formed by a well-chosen

cast led by Jill Gomez as the Marg of Arg figure and cleanly directed by David Farr. What lifts the evening is the brilliance of the music. Ades, in his early twenties and...

Now You Know (Hampstead) Mojo (Royal Court) Dead Guilty (Apollo) Constant phone calls Sheridan Morley A ter a bleak decade as a dramatist, with the major flops of Here and...

Blobby to the rescue Ian Hislop I hope at least we've made you think.' This is an increasingly rare ambition for television but Jeremy Paxman is confident enough to say it at...

Listening to the doc Taki T his is the week of 100 picnics in aid of the Addictive Diseases Trust, with Amabel Lindsay's and Emma Soames's parties bringing the summer party...

I don't get it Jeffrey Bernard O ne morning last week I surveyed the rubbish in my wardrobe and a couple of cupboards and saw that my shoes were tak- ing up far too much room....

Spooky taste in films Carole Morin M ost of the murderers who used to attend my Fun Film Club in Wormwood Scrubs are due to finish their sentences this year. Statistically,...

Editing your own exit Nigel Nicolson S tephen Spender was woven into my life for so long, though never intimately, that when people introduced him to me without knowing of our...

Smithing Andrew Robson I CONSIDER the most useful conven- tion in bridge to be the 'Smith Peter'; not Stayman, Transfer bids, or even Blackwood. This is how it works: Partner...

BACK IN 1974, Jade Grigson remarked, with asperity, 'We in

England have devel- oped a most Athenian characteristic. We are always after some new thing.' If it was true then, it is even truer now. Luckily, nov- elty is not something this...

Morse and Lewis Raymond Keene THE NAME LEWIS is an important one in English chess, being that of one of our best players and writers as well as that of our most famous chess...

A first prize of £25 and a bottle of Graham's Late Bottled Vintage 1988 Port for the first correct solution opened on 14 August, with two runners-up prizes of £15 (or, for UK...

Fast and furious Simon Barnes IT IS HARD to be rational about fast bowling. Few have even tried. I used to do indoor nets in the Alf Gover cricket school in South London....

Dear Mary. . . Q. Juanita, otherwise a gem, witnessed a dishwasher mechanic repeatedly switch our machine on and off during a routine service visit. Since then, our dishwasher...