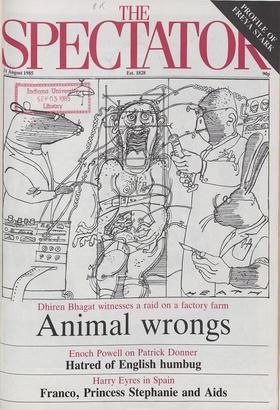 The Marx Brothers — Night in Nigeria A policeman shot dead John Short- house, aged five, while searching a council flat in Birmingham. The boy's father was arrested and charged...

QUESTIONS FOR TRICOT T here used to be, and perhaps still is, in British philosophical circles an irregular verb which conjugates as follows: 'I am sober, You are drunk, He is...

THE reform of British Rail, and of Bri- tain's other publicly owned industries, is a labour of Hercules, perhaps most closely comparable to the cleansing of the Augean stables....

WE have confused our readers because we were confused ourselves. In our leader two weeks ago about the baleful effects of tour- ism, we attributed sentiments to Mr Michael...

Why the Tories might prefer a more cynical government BRUCE ANDERSON M any Tory MPs are now in a thor- oughly gloomy frame of mind. This time last year, the same chaps were...

Ferdinand Mount returns to this column next week.

0 n the beach this year, nudity was the pressing question. I was struck by how different our children's childhood is from our own in this respect. The seaside in my childhood...

Not a suitable moment for painting ourselves green AUBERON WAUGH N obody who has ever handled firearms can feel anything but sympathy for the policeman who accidentally shot a...

AUSCHWITZ FOR THE CHICKENS

Last week the Animal Liberation Front released 1,000 mink in Hampshire. Dhiren Bhagat accompanied an ALF raid to save broiler hens THE day may come when the rest of animal...

FLIGHT FROM THE RAND

Why South Africa's Cape Town FOR ALL the volumes which have been written about Mr Botha's winds of no change speech, the rand had the last word on the matter. Next day it...

Aids, Princess Stephanie and Gonzalez - in the wrong boat: Harry Eyres in Spain Menorca-Barcelona WHILE Spain basks or burns in the fierce August heat, the fly-like mind of...

THE TUC AND MR KNAPP

Peter Paterson on the TUC's 'agonising problem', from which the rail dispute will divert attention FOR the second year running the annual gathering of the trade union tribe...

Travellers: A profile of Freya Stark, indestructible explorer IN HER autobiography, Freya Stark has written that she became a traveller at the age of four, when she set out one...

Sir, — I believe that some five or six years ago the Peninsular and Oriental Company supplied its medical officers with amhydrate of amyl or perhydrate of amyl as a remedy for...

ENTOR Subscribe NOW and save up to 25% on the retail price (equivalent to 3 months FREE) Subscription rates are being held at the old price for a limited period only. Take...

THE APPROACH OF ARMAGEDDON

The press: Paul Johnson foresees tumultuous technological changes THE dispute at Mirror Group newspapers is the opening drum-roll of a sensational season of crisis and...

A prospect of smokescreens obscuring debts and dole queues JOCK BRUCE-GARDYNE iscovering a warning about the perils of excessive borrowing in the latest issue of the quarterly...

Christopher Fildes will resume his column next week.

Sir: I have journeyed many miles this year on express coaches and on British Rail. No doubt coaches like those described by Mr Dalgleish (Letters, 24 August) with 'air...

Sir: I would like to advise anyone thinking of travelling by hovercraft to think again, following my own alarming experience three weeks ago at the start of my holiday....

Sir: Elizabeth Jennings, admirable poet, asks why so many poets 'who showed quite extraordinary promise' when young have `yet seldom published a single book of poems' later...

Sir: An oblique example of what your Leader labelled the South African school of bullying is contained in Mr Stanworth's letter in the same issue (24 August) from the Cape. When...

Sir: Most of Andrew Brown's lucid account of Gerald Nicosia's biography of Jack Kerouac (27 July) cannot be faulted, but he makes a couple of false assumptions in passing. He...

Sir: Further to your article on the lack of maintenance on London Transport (Lead- er, 17 August), 1 should like to add a complaint to the already considerable amount you have...

Still no saint Margaret FitzHerbert CARDINAL MANNING by Robert Gray I n his preface to Eminent Victorians, Lytton Strachey uses an image of how the explorer of the past 'will...

A Finnish knight with no humbug

Why did no one send off the clowns?

Christopher Hitchens THE RISE AND FALL OF THE GREEK COLONELS by C.M. Woodhouse Granada, £12.95 S ombre, sanguinary clowns.' That was the considered judgment of Philip Deane...

A man bewitched by mermaids

Philip Glazebrook KEEPER OF THE STREAM: THE LIFE OF A RIVER AND ITS TROUT FISHERY by Frank Sawyer Allen & Unwin, £9.95 A good fishing book fills the fisherman who reads it...

Ice clamps the tarn in its hollow, in the cove where the sun won't go; under their grey steel hatch, the blind white fish grow thinner. Trees are where a nail has scratched the...

China from inside and out

Giles Mathews STONES OF THE WALL by Dai Houying Michael Joseph, f9.95 TO GET RICH IS GLORIOUS by Orville Schell Robin Clark, f9.95 S ince 1978 China has been settling down...

A story of the preternatural

Miranda Seymour THE STORIES OF RONALD BLYTHE by Ronald Blythe Chatto & Windus, £9.95 POLARIS AND OTHER STORIES by Fay Weldon Hodder & Stoughton, £8.95 R eviewers who like...

Hockney Paints the Stage (Hayward till 29 September) A talent for transforming Peter Levi 0 ne thing certain about Hockney is that he is the best painter of children's...

The Sex Mission (`15', Gate Notting Hill) Future imperfect Peter Ackroyd T his film enters that area most agree- able to the fantasist, the 'future' — the word has to be put...

When We Are Married (Theatre Royal, Bath) Museum piece Christopher Edwards T he production that the Acting Com- pany has brought over to London is part of American stage •...

Great and small Ursula Buchan T he more glorious the flowering in June and July, the more acute can be the disappointment in August after the great aestival surge of energy...

Culture vulture Taki Then something unexpected happened. Her party was voted into power in 1981 and suddenly Melina didn't have things to rave and rant against. But Melina is...

Creative cooking Alice Thomas Ellis I was wondering the other day as I gazed out of the window, watching the waters rising, why we haven't got a Minister for Rain; we always...

Out to lunch J effrey Bernard I spent last weekend in Scotland at a perfectly splendid three-day house party or, to put it accurately, a castle party. My wrenched ankle kept me...

Testing time P. J. Kavanagh 0 ne does try to like one's fellow humans, does one not? One also tries to like oneself. Both have been made difficult for me by the pattern of life...

Mobilisation Raymond Keene N ext Tuesday (3 September) the per- sonal war for the world championship between Karpov and Kasparov breaks out in Moscow. They will battle three...

Sine cura Jaspistos I n Competition No. 1384 you were asked for an obituary notice of an imaginary public figure who led an enviably and outrageously work-free and...

The Case of the Lady in Black

MY REGULAR association with Holmes had come to an end many years previously, but we remained on friendly terms and in occasional correspondence. Thus it was with some delight,...

One of Max Beerbohm's illustrations to Zuleika Dobson was a sketch of an elderly, b espectacled, bald, mutton-chop- Whiskered Byron entitled 'But for Mis- solonghi . . .' (see...