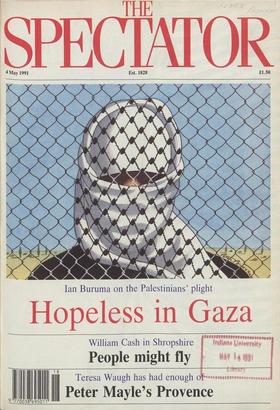 Taxing times for the confused voters of Britain NOEL MALCOLM A ccording to some Tory MPs â the certifiably paranoid ones, I suppose â Mr Kinnock had a splendid time during...

MILES KINGTON A ny day now I am due to reach my fiftieth birthday, and I had hoped to arrive at that safe haven without ever having to go skiing, enjoy opera, become a poker...

A rough beast whose hour has come round at last CHARLES MOORE M r Boris Yeltsin must have been through some difficult encounters in his career, but few can have been more...

Ian Buruma reports on the wretched ghetto at the heart of the Palestinian diaspora Jerusalem AS I was driven through the filthy streets of Gaza, where children rooted through...

Edward Theberton finds the Nigerians as endearing and as corrupt as ever Port Harcourt, Nigeria 'WHAT about me?' 'What about you?' I replied to the policewoman who had attached...

WHERE ARE THE SANDINISTAS NOW?

Janine Di Giovanni finds them harmlessly occupied in the pursuit of money Next week, the British-based Nicaragua Solidarity Campaign is sponsoring a bicycle race from London to...

AUGUST'S WINTER ON THE ICE CAP

Simon Courtauld recalls his uncle's solitary confinement in Greenland, which did him no harm SIXTY years ago this weekend, on 5 May 1931, my uncle Augustine (August) Cour-...

I WAS outraged when I heard last week of the summary dismissal of 600 em- ployees from Guy's Hospital. To think that the management would find no more than 600 out of a total...

William Cash reports on the latest human projectile experiments, which involve flying pigs I WROTE in the Spectator Christmas issue on the exploits of the eccentric Shropshire...

THE INFLUENZA is spreading rapid- ly in London, but is worst in Yorkshire, where it has made havoc in Sheffield as well as in many of the Eastern towns and villages. In...

WHERE THE BARD FEARED TO TREAD

jarring jargon in the job ads MANY state schools now deprive children of Shakespeare, and kids leave at 16 without having read through one book, merely 'extracts'. It's not...

I AM obliged to the Souvenir Press, which has sent me a review copy of Vivienne Angus's Know Yourself Through Your Cat. It offers an unusual insight into our leaders of business...

NOW we know what the Department of Trade and Industry is for. Peter Lilley, the man in the revolving chair, had been wondering. It is for getting between a stockbroker and his...

I AM told not to be beastly to Sir Ian MacLaurin, just because Tesco is suddenly paying him Â£11/2 million a year. He is said to have done a splendid job. I should think it even...

Norman Lamont has a lost weekend but a winning game CHRISTOPHER FILDES N orman Lamont flew to Washington and back for the weekend. It is pleasant at this time of year, the...

Sell Unilever. That company â as a rule the most boring, for its size, in the world â is about to succumb to Banham's Bane. The disease, named for the genial director-...

Sir: I have no objection to Noel Malcolm's slightly unfair teasing about my pamphlet on Conservatism (Politics, 13 April) but his caricature of Catholic social teaching does...

Sir: Rupert Christiansen rightly notes two troubling issues in the 'philosophy of biography' (Books, 9 March). Permit me to add a third, a problem that may in part explain why...

Sir: John Pilger and David Munro (Letters, 20 April) accuse me of 'little more than black propaganda' in my studiously factual analysis of their television documentary, 'Are the...

Sir: I would not presume to question Charles Moore's predictions of the innova- tions that the new Archbishop of Canter-. bury will adopt ('Another voice', 9 March); however,...

Sir: So, at long last, after many months of trying, I have caught that rascal Arnold out ('Afore ye go', 23 March). He's finally given the game away. Thirty five pee â in...

Sir: I enjoyed Charles Moore's 'Another voice' of 6 April. I imagine an editor of any sort of magazine or newspaper perpetually engulfed in a blizzard of unsolicited letters,...

Sir: I thought Christopher Fildes (City and Suburban, 20 April) was, on the European Bank for Reconstruction and Develop- ments, at last hitting in The Spectator the fine form...

Sir: Gary Kasparov, the World Chess Champion, has often accused communist regimes of being lands of mirrors, where true values are inverted. The parallel with Lewis Carroll's...

Papering over the cracks

Richard Lamb CHURCHILL: A LIFE by Martin Gilbert Heinemann, Â£20, pp.1066 I n 1962 Martin Gilbert invited Randolph Churchill to dine in Merton. Randolph was delighted to be in...

Best novel of the year

Christopher Hawtree ALWAYS THE ISLANDS OF MEMORY by Noel Virtue Hutchinson, Â£12.99, pp. 198 W hy do so many covers of books look the same nowadays? It is as if designers can...

Nigel Clive CRETE: THE BATTLE AND THE RESISTANCE by Antony Beevor John Murray, Â£19.95, pp. 383 T he publication of this book has been well timed to coincide with the 50th...

Alone in a valuable house

Anita Brookner FAMILY MONEY by Nina Bawden Gollancz, Â£13.99, pp. 250 m a Bawden's new novel is about property, about how much it will fetch and how much will be lost if the...

Alan Bell THE DESIRED EFFECT by Andrew Gimson Chapmans, Â£13.99, pp.288 T he beautiful Belinda, working in Knightsbridge as secretary to an interior decorator, is beginning to...

Cares that wait upon a clown

Mark Archer E veryone who collects art dreams of coming across a neglected genius, unappre- ciated in his lifetime and still cheap enough to be bought. Albert Houthuesen, who...

Time for the return of the native

Teresa Waugh TOUJOURS PROVENCE by Peter Mayle Hamish Hamilton, Â£13.99, pp. 213 0 h dear, oh dear, oh dear, where do I begin? For I too have lived in France and come away from...

Those who use words like 'love' and 'lust' and 'hornier'

Had better not set foot in California Whence sexist talk of that kind's long since gone: If music be the food of viable on-going creative one-to-one meaningful relationships,...

The essence of their beauty Is that it dies away So exquisitely quickly. How could one possibly pay Even respect to a flower in flower Day upon day upon day?

What agony, our dream-encounters. Can you not understand How pitiably a man is torn, How utterly unmanned, To wake with hands stretched out for one Beyond all reach of hand?...

perhaps have spoken words She had not really meant, Over my shoulder, now and then, I looked back as I went. Anon (late 7th-century)

No. I shall not die for love. I lack the

discipline To face the waves and drown in them. My nature is to spin Around and around like a grain of sand Whenever a tide flows in. Anon (late 7th-century)

It's not because I'm now too old, More wizened than you'd guess. . . If I say no, it's only Because I fear that yes Would bring me nothing in the end But a fiercer loneliness.

An exhibition focusing on the buildings and pavilions of the

Festival of Britain is being held at the RIBA, 66 Portland Place, London WI, until 16 May.

All for Love (Almeida) Black Snow (Cottesloe) Dryden dusted off Christopher Edwards H owever much we must thank Ian McDiarmid, Jonathan Kent and their com- pany for the...

Down by the Riverside Deirdre McMahon T his year, for the first time, Rambert's annual London season was held at the Riverside Studios in Hammersmith, where the stage was...

The great manipulator Martyn Harris T he Rev Al Sharpton is the American black civil rights leader, also known as 'Rev Sound Bite', who is supposed to be the model for the...

Fashion extra Taki Needless to say, the 51-year-old is my friend Mary McFadden, a lady who has been described as eccentric by those who love her, and downright nuts by those...

Have a banana Jeffrey Bernard O ne of my nieces kindly came over the other day to read my mail for me since my eyes have yet to recover from what they have seen over the past...

The Pardoner's tale Zenga Longmore C alling on our evangelist friend Mrs Starman a couple of weeks ago, Olumba and I were perturbed to find her distraught and crying aloud to...

May time â nuts and clouts

WALPURGIS Night and May Day are past so we can get on with spring. My beloved baby turnips and fresh garlic have appeared in the market and our own unbeatable asparagus and new...

I have been shown a staff memo in which the company announces the arrival of an 'industrial chaplain', 'a listening ear out- side the management structure . . . Catch him when...

1007: Holy disorders by Jac A first prize of Â£20 and two further prizes of Â£10 (or, for UK solvers, a copy of Chambers English Dictionary â ring the word 'Dictionary') for...

Final innings Frank Keating SURELY we cannot have another heat- wave summer. So how will the beguiling, burnished batting of the Indian, Azharud- din, begin to look at the...

Wallace Arnold is on holiday, this week water-skiing with John

Mortimer in the fountain of Sir Harold Acton's palazzo in Firenze.