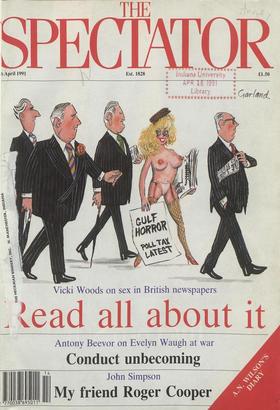 The University of Life M r Roger Cooper, a British writer and formerly a regular contributor to The Spectator, was released from Iran after more than five years in jail. Two...

27124; Fax: 071-242 0603 FORGETTING THINGS PAST I t was by the narrowest of margins, but when the committee investigating the links between Czechoslovak MPs and the secret...

Why British Euro-enthusiasm is in a class of its own NOEL MALCOLM W hen I announced in this column that I was planning to write a book called The Psychopathology of...

A s the author of a profile of Alastair Forbes, which he terms 'preposterously inaccurate', it is an honour to take on his baton from last week. If I were trying to emulate my...

The wind may listen, but by Gadd who wants to read? CHARLES MOORE I n last week's Spectator, a letter appe . ared from Mr Thomas W. Gadd. It complained that for the past six...

Vicki Woods wonders at the prurient obsession of the British press, and compares it with attitudes elsewhere LAST week, both Auberon Waugh and Paul Johnson wrote in these pages...

THE civil war in Chili still drags on, neither President nor Congress gaining serious advantages, though the former has "elected" a new Chamber from among his own friends, and...

Allan Little follows the efforts of a Palestinian Kuwaiti to return to his own country LIEUTENANT Mohamed Al Fashli was kneeling on a mat on the desert sand, gazing south...

Anne Applebaum explains Eastern European attitudes to Western investment NO END of German-, English- and French-speaking businessmen can be found lurking within the...

OH, NOT TO BE IN ENGLAND

Simon Winchester discovers that the Hong Kong Chinese would rather not come here after all Hong Kong A FEW minutes before ten each evening, a shiny white jumbo jet of...

THE BRICKS AND MORTAR BOMB

Richard Ehrman argues that the Government is trying to avoid another boom in house prices SPRING is in the air and the British are talking about the price of their houses....

persist . . . PATIENTS who drink too much are notoriously vague (to put it charitably) about the amount they drink. I have a, simple method of eliciting the truth from them: I...

CAP'N BOB ON THE TROT

The media: to stay healthy you have to keep moving FEW industries are now subjected to more technological and industrial change than publishing. The old 'occupation for gentle-...

CREDIT controls have their friends. John Smith affably says he would use them, but does not say how. Neil Kinnock in his best `Don't bother me with details' manner says he would...

THE hungry sheep look up and are not fed — just stuffed. Why? I was complaining last week that our institutional investors combine the worst features of sheep, lem- mings and...

I AM delighted that my regular reader Roger Cooper will now get his Spectator more promptly. When we were at Oxford, I persuaded Boffins the bakers to bake a loaf for Roger,...

The right and the wrong way to cut out the next silly house boom CHRISTOPHER FILDES T reasury ministers — including the First Lord of the Treasury — want two contradictory...

Sir: If the Government is as opposed to the Khmer Rouge as Derek Tonkin (The apotheosis of Pilgerism', 23 March) alleges, I wonder if he would draw my attention to any occasion...

Sir: Mr Angus (Letters, 23 March) claims that the arrangements for Scotland's cur- rency demonstrate that the Treasury is correct in its assertion that, 'legal tender is a...

Lawrence of the Railway

Sir: James Buchan ('Well educated heads in the sand. . .', 30 March) was being naive in expecting the people of Yanbu to remember T. E. Lawrence. Lawrence did pass through the...

Sir: I am no great fan of Sinead O'Connor, but stand up for her against the tired cynicism of Marcus Berkmann (Pop music, 9 March 1991), who tramps some well- worn territory....

Sir: I mistrust Mr Forbes's professions of classlessness, expressed in

his dislike of the words 'pudding' and goo' etc. . . I sense in his rather fastidious prose style, and name dropping (Duke of Beaufort, Taki), a deeper, hidden snobbery. I...

Sir: Your High life columnist accuses me (23 March) of having 'spent all last year bombarding editors with epistles deman- ding Taki's dismissal'. Not so. I did once write a...

Sir: A number of us here in hedonistic Sydney, so far from Gstaad, are puzzled, and more, by Alastair Forbes's first sent- ence (Diary, 16 March) for we are unsure just who has...

Sir: C. H. Rolph will find reference to the phrase

'between two stools' on page 57 of The Oxford Dictionary of English Proverbs. More than half a dozen sources from Seneca to Trollope are listed. A typical reference comes from...

Sir: It may be that the origin of the phrase `falling between two stools', which puzzles Mr C. H. Rolph (Letters, 30 March), may be found in a party game called 'Choosing the...

Sir: James Hughes-Onslow asserts (Let- ters, 23 March) that in my 16 February article I was suggesting that the third Marquess of Salisbury was 'encouraging racial prejudice' in...

THE FIRST CASUALTY OF WAUGH

Antony Beevor discovers evi- dence that Evelyn Waugh's pub- lic hero was in truth less than honest in retreating from Crete 50 years ago EVER since Evelyn Waugh created the...

The bookie's choice James Buchan IMAGINARY HOMELANDS by Salman Rushdi Granta,f17.99, pp. 432 I s Salman Rushdie a good critic? I'll rephrase the question. Is the author of The...

The way they were then, too

Sara Maitland SEXUAL ANARCHY: GENDER AND CULTURE AT THE FIN DE SIECLE by Elaine Showalter Bloomsbury, f15.99, pp. 242 I am a fan of Elaine Showalter's, and have been since A...

Bombay-wallah in a bow tie

Andrew Robinson THE CONTEMPORARY CONSERVATIVE: SELECTED WRITINGS by Dhiren Bhagat Viking, Indian Rupees 175, pp.391 0 f all my Indian friends Dhiren Bhagat was the one whose...

Drawing his gun, but not his pictures

Five tales of one city

Hard to recognise, hard to forget

Books do furnish a life

A Change of Clothes

Always I knew there'd been knitted rugs pat on the lino in my parents' room, punts to push off on or stepping stones I could change on a whim, to frighten myself, into...

A duchess of the Revolution

Linda Kelly AT THE COURT OF NAPOLEON: MEMOIRS OF THE DUCHESS OF ABRANTES translated by Oliver Bernier The Windrush Press, f20, pp. 387 T he memoirs of the Duchesse d'Abrantes...

Crafts The Ditchling effect Tanya Harrod on a unique and influential experiment in British artistic life Eric Gill and the Guild of St Joseph and St Dominic (Glynn Vivien Art...

The genius of Alexander Thomson Gavin Stamp seeks to revive the reputation of a great Glaswegian architect I date the decline of Glasgow to a moment decades before the...

The Virtuoso (Swan, Stratford) Sex and science Christopher Edwards T he RSC is offering a rare delight with this revival of a neglected Restoration play by an even more...

European Masterpieces from Rumania (Doge's Palace, Venice, till 2 June) Rescued from the flames Roderick Conway Morris F our of the 64 pictures in this exhibition are riddled...

On the level Martyn Harris H ow many times has John Major actu- ally said 'Oh yes, oh yes'? About twice, I would think, and yet already it means him as irrevocably as 'silly...

Battle stars Taki New York It's gloating time in the Big Bagel. One month after the end of the turkey shoot, people are still bragging about having `kicked Saddam's ass' and...

High horses Jeffrey Bernard T here has been a very slight improve- ment in my eyesight. The injections must be working. When I was at prep school my headmaster predicted I...

Pond life Zenga Longmore W henever I take Omalara to the park, I always bring bread for the ducks. At the moment, a duck is Omalara's favourite creature, perhaps because its...

The only pretty ring time

I TRUST you all had a splendid Easter and were not caught in any terrible traffic jams or any other horrendous travelling prob- lems. The clocks went forward which always...

You are invited to imagine that Dr Spoon- er had a twin, that they met once and had a short conversation (maximum 120 words) rich in Spoonerisms. Please supply the script....

Scotch on the rocks Raymond Keene T he Scotch Game, certainly as far as world championship play is concerned, languished unused for around a century until Kasparov...

Jingle in prose Jaspistos I n Competition No. 1670 you were asked for a contemporary anecdote in the style of Dickens's Mr Jingle. `Sudden disappearance — talk of the whole...

1003: Elevens by Mass A first prize of £20 and two further prizes of £10 (or, for UK solvers, a copy of Chambers English Dictionary — ring the word 'Dictionary') for the first...

Oars de combat Frank Keating THEY said don't bother with the Boat Race last Saturday; have the afternoon off in the garden, prune an English rose or two, or get your spuds...