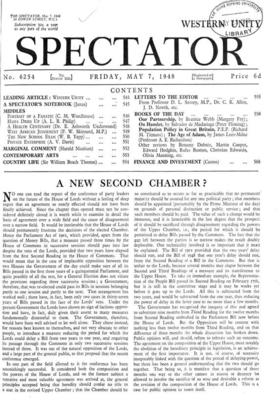 N O one can read the report of the conference of party leaders on the future of the House of Lords without a feeling of deep regret that an agreement so nearly effected should...

When last Saturday, the Greek Easter Eve, Mr. Christos Ladas, the Minister of Justice, was killed by a bomb thrown by a Com- munist, ".General " Markos called the murder a...

The result of the latest B.M.A. plebiscite will be a great relief to all concerned, the doctors themselves, the Minister of Health and not least the general public, for whose...

The Hague Conference on a United Europe promises to be an event of some importance, though whether anything of much con- sequence will actually emerge from it is problematic....

The appointment of Sir Chakravanty Rajagopalachari, more com- pendiously known as " C.R.," to succeed Lord Mountbatten as Governor-General of India is a good one. At 68 " C.R."...

There now seems to be a better chance that some sort of truce will be patched up for Jerusalem, and it is just conceivable that it will endure after the mandate comes to an end...

The time is coming when the Press will have to fight really hard for its own preservation., With newsprint consumption at about a quarter of the pre-war level, it must already...

T HE hopes of those who may have expected an epic contest on the occasion of the debate on the Motor Spirit (Regulation) Bill were doomed to disappointment. The debate on the...

From Shinwell to Steel

The fuss which has been made about Mr. Shinwell's announce- ment in Edinburgh last Sunday that unforeseen difficulties are being encountered in the nationalised industries is...

F ROM this week's debate in the House of Commons there emerged two salient conclusions, that progress can best be achieved by the diligent if unspectacular constructive methods...

From time to time publications of the ridiculous body (1

choose a milder adjective than I might) styling itself "The Western Orthodox University" find their way to my desk. What appears to be its latest prospectus has just arrived....

A SPECTATO R'S NOTEBOOK T HE statistics regarding the membership of

the Labour Party, as disclosed in the party's latest annual report, are particularly interesting. The essential fact is that out of a total membership of 4, 68 5, 6 59 — a...

Having had a little green leather copy of Bellows' French

Dictionary in my desk drawer for years, I have been reading with particular interest a small neatly bound volume issued to mark the 75th anniversary of the publication of the...

The Royal Commission on the Press is methodically pursuing its

industrious way and the verbatim evidence of the numerous witnesses it has heard—some invited, some volunteers—is being published in a steady stream of White Papers, of which...

"Prima fade, the Labour Party has a good claim to

There will, I feel certain, be general satisfaction at the effect of the flood of appeals to the Minister of Works—most notably Mr. Churchill's in the House of Commons on...

PORTRAIT OF A FANATIC

By C. M. WOODHOUSE T O be a Communist in Greece you have to be a downright fanatic for the truth (if Marxism is your idea of truth), the whole truth and nothing but the truth....

By A. L. B. PHILIP T HOUGH the closing-down of the Haifa oil refineries on April 13th may have a decisive influence on the development of the Palestine conflict, it has not in...

By E. ASHWORTH UNDERWOOD A GLANCE at any dictionary of dates will show that the year 1848 was a period of revolution in many European countries. Though England was free from...

O NE of the commonest arguments of the Zik nationalist move- ment in Nigeria is that Britain gives fewer opportunities to her negro colonial citizens than the U.S.A., and that...

By W. B. YAPP T HE new type of secondary-school examination which is to be imposed by the Minister of Education in 1951 has already been widely discussed. On the whole it has...

By A. V. DAVIS T HE café alone could not pay its way. Chez Jean-Pierre it was the sidelines that brought in the steady income, attracted custom to the bar and made accurate...

By HAROLD NICOLSON L AST week at the French Institute in South Kensington, I attended a lecture given by Monsieur Emile Henriot, member of the French Academy. He chose as his...

THE THEATRE Ir was perhaps no accident that Ruritania was invented by an Englishman. Earlier writers than Anthony Hope had imagined fabulous kingdoms and chimerical republics....

ANYONE capable of the rapid readjustment of his sensibilities which is demanded, and blessed with sufficient stamina to stay the course, may find at Burlington House, as ever, a...

Bees and the Apple Blossom The apple blossom is much

too profuse to give the bees a chance of fertilising more than, say, 5 per cent.; and even with the co-operation of flies and night-flying moths (whose ministrations have...

The following experience is reported: " In the back porch there are two nests which have been there for years. They are occupied by only one pair of swallows each year. They use...

Regretted Tilths We must all welcome the ploughing up of

land with the aim of increasing the supply of home-grown food, but the process may represent a capital levy. Valuable stores of Fertility are used up. Particular objection to...

Gm:kr-CARLO MENorn, the author of two short operas now running at the Aldwych Theatre, is an American Italian, and so is the musical idiom which he uses. The Telephone is no...

Men of science put apples into two classes: diploids and

triploids ; and though the division depends on chromosomes (which must remain Greek to most of us), it is necessary to know which sorts are triploids. These, as a rule, will not...

IT is averred by the more statistical naturalists that the commonest birds in England—not excepting even sparrow and stare—are the chaffinch and blackbird. Is their eminence due...

SIR,—Janus is cFsturbed by several recent revelations concerning British education, among them the War Office statement that two in every hundred recruits can neither read nor...

PARTITION AND THE CROWN Sitt,—Mr. Rawle Knox, in his article entitled Six and Twenty-Six, which appears in your issue of April 30th, seems to me to lose sight altogether of the...

Sta,—Many of your readers must have read with dismay your editorial note of April 30th on the Hyderabad situation. They will have been astonished at being told that the dynasty...

Snt,—Ventre undoubtedly marks an epcch in philosophy, but Mr. Jennings's account of him is incomplete. Has he a policy as well as a thesis? Does he tell• us what to do about...

Sut,—During the list few weeks there has been great publicity for the Lord Mayor of London's United Nations Aid for Children Appeal (U.N.A.C.). It is hoped that as a result the...

Sm,—This week I have read in two papers the words "principal pro- tagonists." The second great prophet of tautology was your D. C. W.-S. (p. 515). If he has no previous...

THE LORDS AND HANGING

SIR,—In the midst of the troubles and anxieties of the world today the abolition of the death penalty had come as a gleam of hope that a few sparks of sanity were still...

PETROL AND THE LAW

Sra,—The perusal of Mr. Gaitskell's proposals for incarcerating and fining his fellow-citizens seemed to recall something to my mind. . . . Of course, I had lately been reading...

SIR, —Every friend of Austria will be thankful to you for publishing Mrs. Helene Scheu-Riesz's article Vienna Rediviva in your issue of April 30th. Mrs. Scheu-Riesz writes that...

THE TEMPLES OF JANUS

Sot,—In your issue of April 23rd Janus is presumptuous. How dare be say "It is well to be reminded now and then of the influence exerted on the country . . . by the existence in...

SIR,—Is not the obvious solution for the British possessions on the American continent for Canada to take them over ?—I am, ee,

SIR,—Mr. Martin Cooper's criticism of 11 Seraglio at The Theatre Royal, Bath, was probably justified. The production was an experiment which emphasised the dramatic story and...

Saintliness a Deux Our Partnership. By Beatrice Webb. (Longman. 25s.) EVEN those who lived at the turn of the century when the Webbs were a household word but not as yet a...

THOUGH I have not yet seen any of the three Hamlets now being offered to the public by Sir Laurence Olivier, Mr. Scofield and, Mr. Helpmann, I cannot help wishing that at least...

THE amateur in any field is always to be welcomed, especially in the arts ' - he helps to keep the soil sweet. Thus it is with pleasure that we find Captain Acworth not merely...

Too Many or Too Few ?

IT would make an interesting book to study the violent swings of British opinion during the last forty years (particularly among the economists) about. the dangers of...

THESE two books, both dealing with the treatment of law-breakers, are' complementary. Mr. Page is mainly concerned with the sentences imposed on convicted offenders and Mr....

Robert Schumann : On Music and Musicians. (Dennis Dobson. 15s.) THis is an excellent selection of those of Schumann's critical writings which can still interest the modern...

The Age of Adam. By James Lees-Milne. (Batsford. 21s.) EVEN in architectural circles the term " Adam " means little more than a particular phase of eighteenth-century...

Dog. By Sir William Beach Thomas. The Way of a (Michael Joseph. 7s. 6d.) SIR WILLIAM BEACH THOMAS has written a charming book about the ways of dogs and their companionship...

. The War and Captam Farran

Winged Dagger. By Roy Farran. (Collins. 10s. 6d.) IT is fair to assume that Captain Farran is only accidentally an author. His book shows sign of a hard core of original work...

one guinea will be awarded to the sender of the first correct solution of this week's crossword to be opened after noon on Tuesday week May 18th. Envelopes must be received not...

SOLUTION TO CROSSWORD No. 474

The Church and the Atom. (Church Assembly Publication Dept. 2s.)

IT seems likely that a good many people who take up the Church Assembly's new booklet The Church and the Atom with expectation will lay it down with some disappointment. It is...

By CUSTOS Aig k.0 their recent setback markets are beginning to look steadier again, but only for technical and not for any more solid reasons. It will certainly be surprising...

Mexican Kaleidoscope. By Norman Wright. (Heinemann. 15s.) MR. WRIGHT was Military Attaché to the Mexican Government during the war, and spent three years in the country....