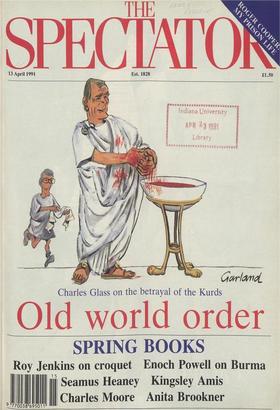 N ine children taken from their homes in Orkney after allegations of 'ritual abuse' and sexual assault were returned to their parents by Sheriff David Kelbie, who said previous...

The road which starts at Tory Central Office and leads to Rome NOEL MALCOLM R umours that the Conservative Party is being taken over by a Catholic mafia are greatly...

A.N.WILSON T here is a peculiar pleasure in reading poetry, and in knowing it by heart. I find that it is a pleasure which grows with the years and, with the pleasure, grows a...

Prospects of a Haitian balm for People Like Us AUBERON WAUGH I n the summer of 1987, for some reason, I addressed myself to the unfamiliar sub- ject of penal reform, proposing...

MURDER BY HELICOPTER IN KURDISTAN

Charles Glass charges George Bush and John Major with cynicism in their attitude to Saddam Hussein's suppression of his people THE army of Iraq, until recently distracted by...

THE PARTY OF TREASON

Nicholas von Hoffman argues that Saddam Hussein's massacre of Iraqis will do little to help the Democrats Tenants Harbor, Maine IT'S a dirty job, but somebody has to do it. The...

Roger Cooper reveals the secrets of how to survive five years in an Iranian jail IF YOU are pulled in off the street and thrown into an unheated cell in winter, your clothes...

persist... FAMILY life is the backbone of the country, which is why it â the country, I mean â is always going to the dogs. Last week, I met a patient who set a new...

BRITAIN AGAINST THE FEDERASTS

Ian Buruma wonders how much of a part idealism plays in the Community Brussels HERE to gauge the post-Gulf mood among the Eurocrats, I set off from the Hotel Metropole, a...

Oliver Knox tracks down the name of some underwear to its classical origin JOHN MAJOR's University of Life sounds a dreadfully dull and worthy institution, a gathering of men...

OUR MAN IN THE CINEMA

Graham Greene reviewed films for The Spectator in the Thirties. Christopher Hawtree selects uncollected extracts WHEN Graham Greene left the Times at the end of the 1920s,...

I SAY, how lacking in the true European spirit. The East Germans have been throw- ing eggs at that jolly Mr Kohl. They do not seem to like monetary union, at least in the form...

ABOUT time too. Even the car-makers' lobby was able to mount no more than a reflex whinge at its passing. It had survived from the days when the taxman would take' up to 83p in...

The company rural barouche goes down with a terminal puncture CHRISTOPHER FILDES I WAS enjoying the refined calm of Paddington station, praised by Lord Ick- enham in Uncle...

IF YOU are looking for a King Charles spaniel, you do not buy a terrier. If you do not want combative instincts, you do not hire Nigel Lawson. Sir Martin Jacomb, his chairman at...

MY PET plan for imprudent building societies â making them invest in gold bars â has put business in Peter Hambro's way (Letters, page 22) and has given the banks an idea...

Sir: I enjoyed Vicki Woods's article on the press's obsession

with sex last week. With the exception of the Independent, most newspapers show an amusing double stan- dard about male and female sexual topics. When a book of mine, The...

Sir: It would appear that E.M. Forster is too subtle for Buruma as well as Edward Said (. . . And oriental ostriches, 30 March). Fielding did not marry Miss Quested but Mrs...

Sir: In your review of the Andrew Roberts biography of Lord Halifax (Books, 23 March), the 'risque ditty' (sung by the Western Brothers, and vei ) popular about 1938) was the...

Sir: I did not respond to the first attack made on my drawings in the Independent by Vicki Woods last September. although it combined ignorance of their content with a libellous...

Sir: In a window at Victoria Coach Station there is a large sign which reads: 'Wallace Arnold. More choice than ever before. Far and away the best coach holidays.' I wonder if...

Precious borrowing Sir: What a delight it is to see my old friend Christopher Fildes endorse, and in public (City and Suburban, 6 April), a rela- tionship he has privately...

Sir: Can any reader answer the question why, when listening to residents of South Ronaldsay in television interviews, we only ever hear the accents of southern England and never...

Sir: Amongst other mistakes in Denis Winter's Haig's Command picked up by Richard Lamb in his recent review (Books, 30 March) was that Eric Geddes was a fierce critic of my...

Not to put a fine enough point on it

Kingsley Amis JAZZ ANECDOTES by Bill Crow OUP, Â£19.95, pp. 350 B ill Crow, whose name sounds like a pseudonym but seems to be real, is a white American in his sixties. After...

Anita Brookner THE QUEEN OF THE TAMBOURINE by Jane Gardam Sinclair-Stevenson, f13.95, pp.227 J ane Gardam, like A.L. Barker, whom she closely resembles, is a writer for an...

Half-forgotten servant of the Empire

Don't judge a book by its genre

Timothy Mo THE NUTMEG OF CONSOLATION by Patrick O'Brian Collins, f13.99, pp. 320 P atrick O'Brian is a first-class writer who can be mistaken at first glance for a third- rate...

Penelope Lively EGYPT: A TRAVELLER'S ANTHOLOGY by Christopher Pick John Murray, Â£16.95, pp. 265 T he effect of Egyptian travel seems always to have been devastating. No self-...

If he had stayed in the four white walls or alone in his patch, the untidy hedge strewing its roses through empty hours he would never have met the dark mare whose neck he...

Billiards in the open air

Roy Jenkins QUEEN OF GAMES: THE HISTORY OF CROQUET by Nicky Smith Weidenfeld, Â£16.95, pp.177 I once had a long audience with the late Emperor of Japan. We had obviously both...

Extra coverage without being caught out

Bonfire: A great fire in which bones were burnt in the open air. Shorter Oxford English Dictionary Summer's petals shrivel in the cold, And dim atelier of memory; Their scent is...

Suffer the little children to come unto me

Juliet Townsend TYRANT OR VICTIM? A HISTORY OF THE BRITISH NANNY by Alice Renton Weidenfeld, f15, pp. 214 M y father once defined a gentleman as a man who, when the woman of...

Harriet Waugh I n William Dougal, Andrew Taylor has created one of the most attractive amateur detectives in fiction. Clever, amoral, easily tempted by the thought of making a...

The way that between your fingers the soap shoots In the bath, so her Spode cocoa-mug went Arcing across the kitchen, landing in The stone sink with a crash like armament. So...

I remember this woman who sat for years In a wheelchair, looking straight ahead Out the window at sycamore trees unleafing And leafing at the far end of the lane. Straight out...

Byron Rogers Y ou may not know this, but the Duke of Edinburgh is brother-in-law to the late Heinrich Himmler. The Duchess of Windsor graduated in fiendish sexual expertise...

This Be The Converse

(after Larkin) They buck you up, your mum and dad, Or if they don't they clearly should. No decent parents let the bad They've handed on defeat the good. Forebears you reckon...

Self-portrait of a young art critic

Paul Johnson MARCHES PAST by Peter Fuller Hogarth, f7.99, pp. 191 T his is not an easy book to judge, or even to describe. Had I not been sent it to review I might well have...

What's in a name?

Edward Mortimer A HISTORY OF THE ARAB PEOPLES by Albert Hourani Faber, f25, pp.551 T he clue is in the title: that final 's'. Albert Hourani is much too wise and hon- est a...

Oh Susannah! Martin Gayford T he word 'jazz' is intensely fashionable among the young and hip, although much of the music going under that heading these days is distinctly...

Half undressed Marcus Berkmann Aft er my sneers at middle-aged rock stars last month â for it remains true that no number of flash Armani suits can make up for a decent...

Keep it in the family Taki .A. New York s everyone who has ever heard of Chappaquiddick knows, the Kennedy fami- ly is no stranger to death, drugs, drink and, above all,...

Fair cop Martyn Harris T he first cliche of any TV cop show is that the cop-star must have a handicap: Telly Savalas's baldness, Sidney Poitier's blackness, Peter Falk's glass...

Cocktails in Greeneland Jeffrey Bernard P erhaps enough has already been writ- ten about Graham Greene, but he has been on my mind ever since the day that I heard he had died....

Holy roller Zenga Longmore O ne of the most lamentable hazards of living ten storeys up is that car alarms, dog fights and human fights are as plainly audi- ble from that...

A discovery calling for congratulation Auberon Waugh 0 n the few occasions I offer a mus- cadet â this is the third, I think, in nine years â I always find myself...

WHEN I was in publishing, every now and then, wading

through piles of unsolicited manuscripts, I'd come across something good, something actually publishable. Af- ter the first fine careless rapture, when I'd leap up from my chair...

Homophonics Jaspistos I n Competition No. 1671 you were in- vited to write a poem in which the rhymes are homophones. A homophone, says my dictionary, is 'a word pronounced...

Master class Raymond Keene the 1960s and early 1970s were a period of wasted talents. The most notable exam- ple was the tragic case of world champion Bobby Fischer who, on...

1004: Snow-whitish by Jac A first prize of Â£20 and two further prizes of Â£10 (or, for UK solvers, a copy of Chambers English Dictionary â ring the word `Dictionary') for...

You are invited to make the metre of FitzGerald's translation of the Rubdiyat the vehicle for a message not of hedonistic cheer but puritanical gloom. Maximum 16 lines. Entries...

Cricketers' almanac Frank Keating THE first-class cricket season, which starts today, will be the longest in history. Not since 1903 has it begun so early â same day, 13...