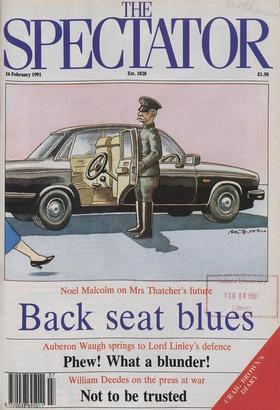 T he IRA launched a mortar attack on 10 Downing Street from a van parked in Horseguards Avenue. One bomb exploded in the garden behind No 10, and the War Cabinet adjourned to...

CRAIG BROWN W e had to cancel our son Silas's christening last Saturday because we were stuck in the snow in Essex and the church was in Sussex. I am a Catholic, and Catholics...

Time to get the stinker Murdoch out of here AUBERON WAUGH The picture was captioned: 'Hot lips . . . painted-up Viscount Linley with two of the transvestite guests at his...

Noel Malcolm discusses Mrs Thatcher's plans, and those which others have for her THERE can be few more frustrated hu- man beings on the face of the planet than the one who now...

NO NEED TO RETALIATE

James Buchan on how the allies are doing the Israelis' work for them Jerusalem FOR such a crude individual, Mr Yitzhak Shamir, the Prime Minister of Israel, is astonishingly...

The police believe that the Whitechapel murders attributed to 'Jack the Ripper' have commenced again, after a cessa- tion of seventeen months, the last or seventh, having...

ANOTHER SHOT IN THE FOOT

William Deedes regrets that war reporting can no longer be left to editorial discretion THESE have not been heroic days for war correspondents. In marked contrast to some...

Stephen Handelman on the old apparatchiks who want to corner the new Soviet market Moscow HE LOOKED vaguely important in his tailored Western suit. Pudgy, self- confident and...

Jonathan Rauch explains how the Americans work out what the war will cost NO ONE in Washington can remember anything like the eeriness of this war. It is not what war is...

George Chowdharay-Best on an ethnic innovator in Parliament CONTROVERSY over the selection of Mr John Taylor for the safe Conservative seat of Cheltenham recalls the somewhat...

I sometimes wonder whether judges, in sentencing criminals to terms of impris- onment, arrive at their decisions by throwing dice. In my last prison clinic, for example, I...

the public should pay back political clerics and actors in their own coin THE PUBLIC is influenced not merely by the professional media but by self- proclaimed high-minded...

Polly's folly • • EVERYTHING must go from 42 Berkeley

Square, where Polly Peck set up its head office, regardless of cost or taste. The house is crammed from cellar to roof with lavish purchases — giltwood torcheres in the...

The classic victims of financial recession are airlines. Their assets are their routes and their aircraft — but the routes, as TWA is finding, may not be theirs to sell, and if...

THE reason why most folk-songs are so terrible is, as Tom Lehrer said, that they are written by the people. That goes for self regulation too. Fimbra, which is sup- posed to...

POLLY assets held out of this sale include a small fleet of BMW cars. These were provided for the use of 14 ladies who seem to have been consultants. The cars have been called...

I MUST take care to exclude Tim Cong- don, Sir Alan Walters and Co from the parrot-house. They liked the idea of the ERM no better than I did (as readers may be patient enough...

Another idea from those wonderful parrots who gave you the ERM CHRISTOPHER FILDES H ere at last comes the interest-rate cuts — but not the devaluation. The last time we...

Sir: When Edward Heath denounces the allied commitment to the liberation of Kuwait as 'the new imperialism' does he stop to think what he was up to in 1956? As a government whip...

poor potential human', 5 January) and most of the subsequent correspondence, it is im- plied that the procedure can be not only bloody and horrifying to the layman or woman but...

Sir: When one of the few pleasures of active service in the desert is receiving The Spectator, you will appreciate that such pleasures are considerably enhanced by reading...

Sir: A Mr Vines's criticism of my book Loopy has

caused great discontent, and I am told that of the many letters I have received, some have been sent to you. Personally I was delighted that my ran- dom ramblings should be...

Official denial Sir: I must express surprise over the article ('Unconditional Surrender II, 9 February) written by Mr Murray Sayle. The article as a whole contains thoughtful...

Not for the squeamish

Sir: I write in some relief after reading Elaine Rankin's letter (2 February) follow- ing the anti-abortionists' reaction towards Amanda Craig's account of some abortion...

Sir: Alexandra Artley is quite right to ask publicly (Letters, 9 February) of the Governors of the Thomas Coram Founda- tion precisely the question that the parents and staff at...

Sir: I agree with all of what Charles Moore had to say in his Glaspie Syndrome article (Another voice, 26 January), except for his assertion that the Americans are 'freer than...

Thanks for the library

Sir: In view of the fact that you published Mr Menhinick's letter on 2 February, I hope that you would also be prepared to publish mine. The gift of books to Thomas Peacocke...

Sir: We write as parents of a child attend- ing

the Thomas Coram Children's Centre, in response to Alexandra Artley's letter. Our three-year-old son who has hydro- cephalus has certainly benefited from his eight-month...

Sir: I was interested to read the criticisms of Amanda

Craig's article from Mr David Paintin (Letters, 19 January). Perhaps what Mr Paintin wanted was a kind of advertisement for the services of the abor- tionist, yet instead the...

Sir: 'Product placement' is, of course, a mainstay of the Hollywood economy nowadays, but nobody has yet remarked that newspapers appear to be following its lead. Two of this...

A paradox wrapped in an enigma Caroline Moore SAMUEL BUTLER by Peter Raby I n 1860 a group of pioneers landed in New Zealand and marked the occasion by making a bonfire of...

Francis King THE KING T he best way to convey both the matter and the manner of this posthumously published novella is by a quotation. Lance- lot is speaking to someone not...

Can thy soul know change?

Piers Paul Read MODERN CATHOLICISM: VATICAN II AND AFTER edited by Adrian Hastings £20, SPCK, pp. 496 I t is now 25 years since the close of the Second Vatican Council, called...

You worse than senseless things

Peter Levi WRITER'S BLOCK by Zachary Leader Johns Hopkins University Press, £19.50, pp. 272 titer's Block has been familiar as a W phrase since the Fifties and, I think,...

Strolling these stuccoed chambers walled with dreams What is it that you like? You come and go With news of Rubens and Correggio And Jove's outrageous rapes, Ovidian themes Of...

The wickedness of Papa and Baby

Anthony Daniels HAITI: THE DUVALIERS AND THEIR LEGACY by Elizabeth Abbott Robert Hale, £17.95, pp. 432 H aiti exerts a fascination out of all proportion to its size and...

Exaggerations rather than fantasies

Mrs Spector at the feast

William Mount BE MY BABY by Ronnie Spector with Vince Waldron Macmillan, £14.99, pp. 338 R onnie Spector is famous for two things: her brief career as raunchy lead in the...

Cocktails and laughter, but what came after?

Philip Glazebrook SHANGHAI by Harriet Sergeant Cape, £16.99, pp. 384 I n 1832 an agent of the East India Company, Hugh Lindsay, was searching the China coast for a site upon...

Art This blinkered isle Andrew Solomon on the xenophobia of the British art establishment M rs Thatcher, taken to an interna- tional art exhibition last year, asked, in a...

Honouring the rooster Peter Phillips A composer we are almost certainly going to hear nothing about this year, unless we happen to be resident in Yugos- lavia and probably not...

The Royal Ballet (Covent Garden) Not very Chekhovian Deirdre McMahon F amily tensions and sibling rivalries have been the subject of a number of Kenneth MacMillan's ballets,...

Dominic Lawson writes: Two years ago we appealed to our readers to buy half-price subscriptions to The Specta- tor which we undertook to send to people in Poland. The scheme was...

Tommy this and Tommy that Ursula Buchan I t is hard to know quite why the word 'amateur' should so often be used pejora- tively. After all, the beauty of being an amateur is...

Red romps Martyn Harris C ompassion may have returned to the Tory Party but the arrogance, savagery and vanity of Alan B'Stard MP show no sign of flagging. In the last episode...

Savage customs Taki A if flying Olympic Airways from Athens wasn't bad enough, on this trip I had to endure the added burden of a Customs and Excise bully who did every- thing...

Of dogs and babies Zenga Longmore r ay excuse me if I sound somewhat like 'Jennifer's Diary' this week, but an occa- sion such as Charles Moore's housewarm- ing party simply...

AN UNAPPRECIATIVE sneer has taken over as the dominant critical

mode of recent years: the barbed notice, the snide interview, gleeful disappointment and smugly dissatisfied condescension have column-inched their way into fashionable...

Wise and foolish virgins Auberon Waugh I n a recession, the foolish virgins buy cheaper wine than usual and cause them- selves endless pain and misery. Once you have grown...

Jaspistos CalVAS REGatt SCOTCH WHISKY i n Competition No. 1663 you were asked for a heartfelt Valentine. There are two Saint Valentines, both very faint historical figures...

This is a dead straight competition. I simply want an original, unpublished poem (maximum 16 lines) entitled 'Snow'. This week the top winner will get £50 (I reckon a good poem...

Irrational anthems Frank Keating THE Band of the Royal Marines, on duty at Twickenham's rugger international this Saturday, have been practising a brand new national anthem....