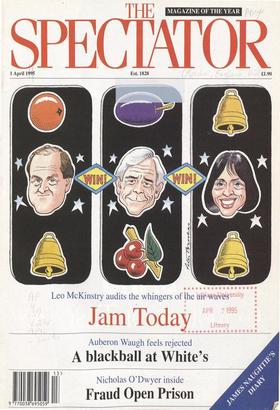 Ho, hum; our democracy teeters again on the lip of another great Tory putsch BORIS JOHNSON A a piece of political theatre, the John Major leadership crisis is now approaching...

JAMES NAUGHTIE T he trouble with living in a goldfish bowl is that it is uncomfortable, and your little world seems distorted and bent to outsiders. Yet in the lush fronds of...

A few sour observations on being blackballed from White's club AUBERON WAUGH 0 n Thursday, while I was still in Lon- don, a reporter from the Times telephoned my wife in...

HOW TO BANKRUPT BRITAIN OVER BREAKFAST

Leo McKinstry subjects the BBC's Today programme to an audit, and discovers that in one week alone, its supplicants would add 10p to the standard rate of income tax JOHN...

`MUMMY, why aren't you drinking your tea, isn't it nice?' Veronica asked at breakfast on Mothering Sunday. . `Delicious, 0 zygote of my gamete,' I answered. 'Very kind of you....

THE FIDDLE John Laughland explains why Belgium is so good at producing corrupt international statesmen The part of Europe which is now Bel- gium has always had a pivotal role...

I VISITED a different prison last week, situated in one of those small, ancient and delightful English cathedral cities, where all the youths suffer from acne, look stupid and...

A CHARMING TALE OF COUNTRY FOLK

GETTING AWAY WITH IT

Nicholas O'Dwyer goes inside Ford Open Prison, and discovers that Britain's leading fraudsters have little to complain about A SHARP RAP of the oak hammer on the brass-plated...

OVER THEIR DEAD BODIES

Rural North Yorkshire is horrified about a proposed new cemetery; and there is a faint smell of racism, reports Laurence Baron Terrington IT IS HARD to imagine a more pleasant...

MEETING ONE OF HISTORY'S FOOTNOTES

Simon Courtauld shares a drink with Alan Walker, Lord Curzon's cipher clerk, and still going strong at 100 IT WAS 11 o'clock in the morning, we were sitting in a converted...

THE GALE which swept over England on Sunday was of quite unusual vio- lence. During the height of the storm, the leaden roof of the Banqueting Hall at Whitehall was rolled up...

Martin Vander Weyer examines the prospects of old money in the wake of two spectacular business failures among the gentry IN AN ERA of giant impersonal corpora- tions known...

A poet could not but be gay in such a jocund company PAUL JOHNSON N ow that the homosexual lobby, the most pushy and unscrupulous in our histo- ry, has split over Nazi-style...

Sir: Your leader (25 March) seems to assert that Saddam Hussein attacked Halabjah with hydrogen cyanide. Since this is only reliably lethal in confined spaces, the intel- ligent...

Sir: If I were to seize 97.5 per cent of Paul Johnson's earnings, he would summon the police. In his time John Freeman confiscat- ed likewise his countrymen's earnings. Yet...

Sir: Allow us to echo Simon Winchester's distaste for the increasing amount of lewd, offensive aild insulting information appear- ing on the rnternet and commercial on-line...

Sir: I was intrigued to read that Mr Gore Vidal and his blood cousin Mr Albert Gore Jr might be my kinsmen (Letters, 18 March). If it is of any help, I would like to put the...

Sir: Lord Bethell's mention of Arundell (`Gong but not forgotten', 18 March) is particularly apposite as 1995 is 400 years after the battle of Gran in 1595. Sir Thomas Arundell...

Lock up your daughters

Sir: As an American boxing enthusiast I must take issue with the claim of Robert Philip (`Get out of jail free: to make a bil- lion', 18 March) that Mike Tyson 'remains the...

Sir: Like John Wickham (Letters, 11 March) I have had 25 years' experience of examining genitalia of all shapes and sizes. I agree with his findings that there is little...

Sir: In his letter of 25 March, Mohamed Fayed calls me a 'coke-sniffing columnist'. He is referring to my bust for possession of cocaine in 1983. I paid my debt to society long...

Sir: Any slight reservation one might have entertained regarding The Spectator being `magazine of the year' (Leading article, 25 February) was instantly suppressed by the...

Sir: Apropos of the Barings crash and the fall of Rupert Pennant-Rea, I wonder how many bankers (including Eddie George), as they sit with their offspring watching Mary Poppins...

The Fort William sleeper should have Vote for Me blazoned along its side SIMON JENKINS A i old Treasury game is to guess where in Britain has the highest subsidy per square...

The sleeping booty Andrew Barrow THE LAST OF THE DUCHESS by Caroline Blackwood Macmillan, £16.99, pp. 230 T his thoroughly unusual book is about the long, slow death of the...

Amit Chaudhuri ASTONISHING THE GODS by Ben Okri Phoenix House, £12, pp. 158 T his short book is a sort of parable about one man's spiritual quest. It starts off with the man...

Caroline Moore THE CUNNING MAN by Robertson Davies Viking £15.50, pp. 489 We are left in no doubt as to the identity of The Cunning Man. His hand- some face stares out at us...

The survival of the fattest

Gabriele Annan ORSON WELLES: THE ROAD TO XANADU by Simon Callow Cape, £20, pp. 578 T he Xanadu of the subtitle is the name of Citizen Kane's monstrous Californian castle in...

Taste as a moral guide

Kate Hubbard THE BEST OF FRIENDS by Joanna Trollope Bloomsbury, £15.99, pp. 261 I n her last novel, A Spanish Lover, Joanna Trollope transported part of the narrative to Spain,...

Fine head of a rotten body

And now for something very much the same

Tom Hiney HEMINGWAY'S CHAIR by Michael Palin Methuen, £14.99, pp. 280 I f Paul McCartney had gone to universi- ty, he would surely have grown up to be Michael Palin. Apart from...

A selection of recent poetry

William Scammell M y laboratory/ is the dust where I stand, / the sulphur smells of the farmyard' says the narrator of Spring Forest by Geof- frey Lehmann, an ex-serviceman...

Here's a land that I dreamed of once in a

Was Newman pushed, or did he jump?

Lenten feast Robin Holloway W here supreme quality is concerned, enough is not too much: we are greedy and want more. Bach's two extant settings of the Passion — the vast...

Take me (I'm yours) (Serpentine Gallery, till 1 May) Pret- Giles Auty A mong the invaluable pieces of advice offered me regularly are admonitions to confine my reviews to...

Morning and Evening (Hampstead) Borders of Paradise (Watford) The Memorandum (Orange Tree, Richmond) Forever a Dane Sheridan Morley I t would be unforgivably impertinent and...

Siegfried (Royal Opera House) In Search of Angels (Peterborough Cathedral) Fresh circles Rupert Christiansen A rly doubts I had about the first instal- ments of the Royal...

Nobody's Fool (`15', selected cinemas) Rugged cracks Mark Steyn I 'm boycotting the Oscars this year over their decision, on a trivial technicality, to declare The Last...

A natural state of affairs Taki M arch has been the cruelest month where sex and the English are concerned. A very competent doctor up north is struck off the medical...

When the Sominex fails Jeffrey Bernard I was also slightly amazed to think about the Bible's teaching on the subject of fideli- ty and adultery, especially in view of the...

The joy of sacking Holly Budd I was going to say that no one enjoys sacking people but on putting the proposi- tion to the ATO test (Assert The Opposite — a useful guide to...

Where is he coming from? Nigel Nicolson T ony Blair's Spectator lecture won him undeserved praise. It was so confused, so muffled, so deficient in stimulating ideas that I...

Fools and courses IT WILL be Passion Sunday tomorrow, and

I am in search of a particular kind of dried pea, the Carlin pea, only to be found in the north-east of England, so I understand. One of our greengrocers in the market told me...

Top behaviour Andrew Robson ANDY WARHOL'S prediction that everyone in the future will have 15 min- utes of fame in his/her life should apply to the little known New York...

Rusticated Raymond Keene GATA AND RUSTAM are out. One of the most eccentric and voluble double acts in the history of chess has been seen off from their hoped-for challenge to...

COMPETITION Acrostic Jaspistos IN COMPETITION NO. 1874 you were invited to write an acrostic poem, the first letters of each line spelling out WASTE PAPER BASKET, the poem as...

A first prize of £25 and a bottle of Graham's Malvedos 1979 Vintage Port for the first correct solution opened on 18 April, with two runners-up prizes of £15 (or, for UK...

Ringing tones Frank Keating IT SEEMED a touch harsh last week when that goalkeeper in the Welsh league was sent off by the referee for 'time-wasting'. Among the custodian's...

Dear Mary.. . Q. How can one discourage nannies from chatting to one? I share a nanny with two friends and she comes to me for two morn- ings a week. I seem to achieve even...