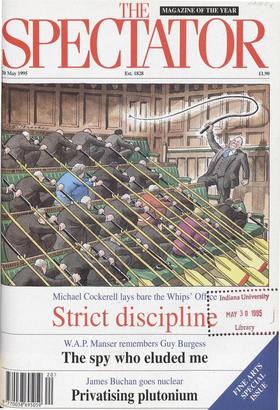 Virginia Bottomley released back into the community M r John Major, the Prime Minister, indicated that he had no intention of extending the remit of the Nolan Commit- tee on...

If the bedpans go unemptied, it will be the nurses who forfeit sympathy BORIS JOHNSON I t was with predictable terror that the Tory backbenches witnessed events in Har-...

NICK HORNBY T en years ago this month, 39 people died in the Heysel Stadium disaster. It is true that a group of English fans were cul- pable; it is also true that since then...

This house believes you should make friends with the mammon of unrighteousness CHARLES MOORE B y the time you read this, I shall have delivered a speech at the Cambridge Union...

Michael Cockerell has just completed a BBC investigation of the Government Whips' Office. Here, he gives a preview of the programme's discoveries AT THE START of May, the...

persist.. . WRONGDOERS and lawbreakers used to seek sanctuary in the church; nowa- days they seek it in the hospital. It isn't only the police they wish to avoid: it is each...

W.A.P. Manser tells how he was charged by MI6 with intercepting Guy Burgess during the spy's flight to Moscow. But one mystery remains ACCORDING TO 1959 Cabinet papers...

James Buchan discovers a curious consequence of the latest privatisation: the City will own a mass of weapons grade plutonium THE CITY of London is about to be offered the...

`Mummy, why can you have an iron- monger, but not an ice-cream-monger?' asked Veronica as the Mr Whippy van tinkled into earshot. `Don't come the Shirley Temple with me, 0...

Nigel Nicolson was Nicolai Tolstoy's chief witness in the libel action brought by Lord Aldington. Here he says what the court missed BEFORE LORD ALDINGTON brought his famous...

ON WEDNESDAY a meeting of the Women's Employment Defence Associ- ation was held at Mrs. Courtney's, to discuss the bearing of the new Factory Act on the condition of working...

Alasdair Palmer delves into the mur world of criminality to discover the prison system's darkest secret DESPITE the Home Secretary's determi- nation to ensure a tougher and...

THE RING OF NO CONFIDENCE

Robin Harris, formerly one of the Tory party's leading policy-makers, argues that Major's `listening' initiative is his silliest idea yet MR MAJOR'S newest promise is to...

NO JOHN! NO! Michael Argyle, the judge in the Oz trial at the Old Bailey, finally answers his critics, especially Mr Mortimer QC TWO CHEERS for dear old John Mor- timer of...

The Digger visits the Last Chance Saloon and gets a drink on the house PAUL JOHNSON T he so-called stern rebuke administrat- ed by Rupert Murdoch to his News of the World...

Lloyd's gets ready to unveil its strategy, as borrowed from Moshe Dayan CHRISTOPHER FILDES L atest word from the leaning tower of Lime Street is that Lloyd's of London is...

Sir: In Philip Hensher's 29 April review of John Le Carre's new novel, he writes: 'No mere novelist could have been expected to forecast the end of the Cold War . . . and none,...

Sir: Alasdair Palmer's article 'Does white mean right?' (18 February) on the heri- tability of intelligence and the genetic basis of race differences in intelligence contains a...

Sir: There is only one man in the Cabinet capable of strong leadership who would command broad support and yet revitalise the Government with new faces and intelli- gent...

Sir: Giles Auty's piece (Arts, 6 May) was a lucid exposition of the true quality of Modernist Art. Indeed, to have spoken so much truth on a single page was a near miracle....

Sir: As an avid reader of your magazine, I am pleased to see that its circulation is increasing. I feel, however, that it would appeal even more to the average reader if your...

Sir: I am surprised and puzzled by the omis- sion of the abolition of Exchange Controls from the Moore family's list of improve- ments since 1979 (Another voice, 22 April). This...

Sir: In his review of my book The Forgotten Few (13 May), George Pownall states that I fail to support my dismissal of the 'dash and indiscipline' view of the Polish airmen with...

Sir: I warmed to your article paying tribute to my successor as Her Majesty's Chief Inspector of Schools, Chris Woodhead (Not exactly teacher's pet', 13 May). For the record,...

Sir: Dot Wordsworth (Mind your language, 25 March) is interesting about language but should be more careful with figures. Dates BC are counted backwards, so the 6,000th...

Sir: I see The Spectator is sponsoring a liter- ary dinner with Baroness Thatcher. I pre- sume that you are also planning to sponsor a political dinner with Ms Jackie Collins....

Sir: Dot Wordsworth (Mind your language, 13 May) reports that a Japanese reader inquires why English publications western- ise Japanese names rather than use the...

Without an Arnold Goodman, government is one long slither to a fall SIMON JENKINS I only once saw Lord Goodman's guard drop. It was three years ago, when he gave a small...

Aspiring to the condition of opera

John Bowen POWER PLAY: THE LIFE AND TIMES OF PETER HALL by Stephen Fay Hodder, £20, pp. 402 Y ou can tell this is a 'warts and all' biography from the photograph on the cover...

David Ekserdjian PAINTINGS IN THE UFFIZI AND PIM GALLERIES by Gregori, Paolucci and Chiarini Bulfinch, Little Brown, £75, pp. 647 I once overheard a tour guide in Florence...

Alan Ross LORD TED: THE DEXTER ENIGMA by Alan Lee Gollancz/Witherby, £16.99, pp. 224 I an Fleming spent the last few weeks of his life in the Dudley Hotel, Hove, where I saw a...

Does our end justify our genes?

John Cornwell RIVER OUT OF EDEN by Richard Dawkins Weidenfeld, £9.99, pp. 166 W hen Francis Crick and James Watson unravelled the molecular structure of the gene in 1953 they...

An assortment of meringues

William Scammell THE DESTINY OF NATHALIE AND OTHER STORIES by William Boyd Sinclair-Stevenson, £9.99, pp. 195 F ancophile African film director Aurelian No goes to Hollywood to...

Problems of a duel personality

Matthew Parris THINGS TO COME: THE TORIES IN THE 21ST CENTURY by John Patten Sinclair-Stevenson, i1Z99, pp. 255 I like and admire John Patten and had hoped there would be...

If we do meet again, why, we shall smile!

It means just what I mean it to mean

Kevin Myers FREE IRELAND by Gerry Adams Brandon, £7.95, pp. 256 M uch of the war in Northern Ireland is about words. Take the word freedom. It carries codes. As does the word...

Art A chance to say farewell After eleven years as The Spectator's art critic, Giles Auty is moving to Australia I t is 11 years now, almost to the day, since I wrote my first...

Dreaming of summer Alistair McAlpine S hould this summer have an uncharacter- istic but occasional turn of hot and sunny weather, then playing tennis is a splendid way to pass...

Jeffrey (Greenwich) The Silver Tassie (Almeida) A Midsummer Night's Dream (Barbican) Too jaded to cross the water Sheridan Morley D espite the current triumph of the Brits on...

Putting on a brave face Ian Hislop I wonder if David Mellor is watching The Politician's Wife (Channel Four, Tues- day 10 p.m.)? It is the story of a Conserva- tive minister...

We shall not be neutered Germaine Greer 0 ne of the joys of living in the country is that I don't have to see the Evening Standard. Straphangers on the London Underground on...

Buddies I have known Taki A few years ago, in these here pages, our very own Auberon Waugh, wrote an amusing piece about yours truly. He wrote that I was a Cypriot waiter by...

Mixing up the sexes Jeffrey Bernard I am fairly appalled and certainly fed up with the amount of fuss and coverage that the media gives so-called gays. There are now, and have...

Giving up the pretence Holly Budd 0 thers have done it better: Captain Oates, countless gladiators, Shakespeare in his sonnets, Keats from his death-bed. Farewells may never...

IN OUR OUR New Year issue, on no evidence at all I'll admit, I predicted that 1995 would see the rebirth of the French bistro. Natu- rally, all culinary pointers suggested a...

Record breaker Andrew Robson HUMAN BEINGS are obsessed by extremes: the highest mountain; the biggest waterfall; the longest running the- atre performance. I am often being...

1 R I A ISLE OF i SIToLlt HALT SCOTCH WHISKY URA ISLE OF COMPETITION Bouts limes Jaspistos IN COMPETITION NO. 1881 you were invited to write a poem with given rhyme...

Missing link Raymond Keene MIKHAIL BOTVINNIK, who died in Moscow earlier this month at the age of 83, was the last link with the old generation of greats. Botvinnik played...

A first prize of £25 and a bottle of Graham's Malvedos 1979 Vintage Port for the first correct solution opened on 5 June, with two runners-up prizes of £15 (or, for UK solvers,...

Rovers return Frank Keating TWO OR THREE issues ago, with jaunty confidence, this space was devoted to applause for Blackburn Rovers, evocative old-timers returning at last to...

Dear Mary. . . Q. Recently, as I left an early evening cock- tail party a man said to me, `Night-night.' This left me with a feeling of being unwant- ed and unpopular. How can...