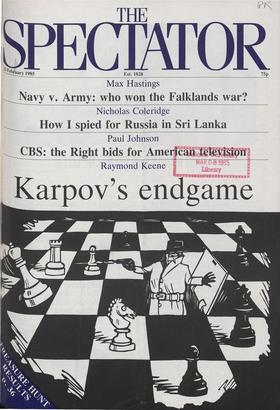 etween Mrs Thatcher and Mr Kin- nock ,, the exchange of letters grew to a malady, as the Labour Party tried to obtain political advantage from the acquittal of Mr Clive Ponting,...

Journalists prefer secrets I t is embarrassing to be proved wrong so quickly and completely. Last week I wrote that Mr Michael Heseltine had been set back in his career by the...

Gavin Stamp writes: Peter Fleetwood- Hesketh seemed a fantastic creature from another age. Only with his death last week shortly after his 80th birthday did some surprising...

M r Enoch Powell's Private Member's Bill on the protection of human entbryos, given its second reading in the Huse of Commons by the resounding Majority of 238 votes to 66, has...

T he capacity of the Foreign Office to abuse its legacy of impressive Euro- pean outposts, often at the taxpayer's e xpense, continues to excite alarm both at 0 _0M e and...

Instant sunshine Auberon Waugh T he Castle Hotel, Taunton, is one of those institutions which make me proud to be a Somerset man. Its cellar is one of the best in the country...

T he decline of cities can be measured by the disappearance of once thriving secondhand bookshops. Liverpool lost hers years ago; Birmingham possibly never had any. Edinburgh...

Sam White Paris T he 25th Congress of the French Com- munist Party, which at one time prom- ised to be a rumbustious affair; has in fact passed off peaceably enough, with the...

Nicholas Coleridge C ince I have never been inside a British ■ ...) jail, it is difficult to draw comparisons with a Sri Lankan one. But for hilarious bedlam I do not suppose...

Yankees of the South

Simon Blow Middleburg, Virginia T he South of the United States begins, we are told, at the Mason-Dixon line. Mr Mason and Mr Dixon were two 18th- century Englishmen who laid...

There is one fact which every Liberal Meinber who votes, or abstains from voting, upon the motion of Censure, ought to bear clearly in mind. There is only one practical...

Little tales from Lozere Clare Bayley M ost English people, and some French people, have never heard of a departement which lies between the Cantal Plateau, the Margeride...

Andrew Gimson We are nourishing at immense cost a monster of great potential destructiveness. And yet we love him dearly. Regarded in its collective aspect as 'the traffic...

Alan Gibson p erhaps the most sympathetic argument that the miners have used in the strike is that pit closures would destroy communi- ties. Villages, small towns, with a loved...

A talent to amuse

E velyn Waugh had nightmares about him. When in Pinfoldian mood, vi- sions would flash across the great novelist's imagination of a conceitedly handsome young Bostonian who now...

Curbing media arrogance Paul Johnson I was in New York when the third and final jury verdict in Sharon v Time Magazine was delivered. The entire case shows Time in a poor...

T he Punch-and-Judy knockabout in pro g ress at Dunlop does not seem the best way to determine the future of the company. Chairman Sir Michael Edwardes and BTR's chairman Sir...

Renaissance at ICI Tmperial Chemical Industries next week lreports on its annul mirabilis. Was 1984 miraculous enou g h to make ICI the first British company to take its...

Opiates and the people Sir: Mr Wheatcroft puts forward an abso- lutist argument (Letters, 22 December) for the decriminalising of heroin. Since some drugs are legal and...

Sir: How strange are the ways of provi- dence. High Life has led to prison and Low Life has led to bankruptcy. One would have expected it to be exactly the other way round....

Sir: Gavin Stamp was very interesting on telephone boxes, but

surely he missed the most important point in favour of the old design. American street telephones are inadequately insulated from the noise made by traffic and passers-by. It is...

Sir: In the course of his semi-literate account of Mrs Thatcher's first ten years as leader of the Conservative Party (Profile, 9 February), a writer of yours refers to her...

Sir: I suggest that the meaning of `ponting' (Politics, 16 February) could be extended to include the misuse of English in a way that the reader cannot possibly respect, for...

Sir Auberon Waugh considers his children intelligent, attractive and gifted' (Another voice, 9 February) and bemoans their failure to get into Oxford. I am also intelligent,...

Sir: I must take issue with you and with Gavin Stamp on his remarks (`Save the telephone box', 9 February) on handicap- Ped people. I wish it were not necessary to make `the...

How the land war was won Max Hastings T he men fighting the Falklands war perceived its essential absurdity — the nonsense of expending blood and treasure for a barren cluster...

Peter Quennell O sbert Sitwell has told us, among his memories of literary London, how, if W. H. Davies visited him at his pleasant house in Chelsea, although the middle- aged...

gold chain, An old foot in a silver shoe: An old fool in a new dress I wouldn't be her, would you? A new love in an old bed? She'll find more than the springs will creak:...

David Sexton O ne of the great tenets of feminism is that since language is man-made, it Condemns women to silence or to distor- tion — to 'telling it slant' in Tillie Olsen's...

On The Prayer Book

The empty bucket, sound, clangs in the well And draws up nothing, banged against the wall. Was meaning down there? It is dry now And all around the well-head chirrup and mow...

The future church of England

A. N. Wilson Roman Catholicism in England Edward Norman (OUP £9.95) tatistics can be manipulated to prove almost anything. If the Archbishop of Canterbury were presented with a...

Patrick Skene Catling "C": A Biography of Sir Maurice Oldfield Richard Deacon (Macdonald £9.95) • In shogi, a Japanese game like chess, one does not kill the enemy's men on the...

Through to the death

Out of tune Peter Phillips I t is often said that symphony orchestras reflect their countries of origin, in styles o f %laying or ways of expressing them- selves. If this is...

Poetic Christopher Edwards Richard II (Old Vic, Bristol) Rumblings (Bush) I would always recommend a visit to the Bristol Old Vic if only to view its lovely Georgian...

Cargoes Charles Campbell T here are some commercial practices which, while not dishonest or unethic- al, don't appeal to me — selling catalogues of your own merchandise,...

Wogan Alexander Chancellor ?There is a lot to be said for Terry Wo g an. Because his television chat shows have been so bad, I sometimes forget to say so. For one thing,...

Power of speech Alice Thomas Ellis I have an early work by Mrs Beeton which she wrote for the smaller establishment; that is, a household with only a cook, a couple of maids...

Catastrophic Jeffrey Bernard T have just received a rather moving letter .1.from an old horseracing friend called Rufus who is an awfully nice rotter. For some 20 of the...

Jaspistos reports: Competitors were asked for a child's report to the local authorities on the progress and behaviour of parents during the holidays. Only one report was wholly...

No. 1360: Furtive fun food Set by Jaspistos: I have just seen in the Underground an advertisement for a res- taurant (1 will not name its nationality) which reads: 'Clandestine...

1HR E AT ENDIAIN Each unclued across light is an Eng ish or Wels h place-name n eofh te u which i u c e h d d can down lights. i a g n h a t g s . r ammatised into o Winners:...

Treasure Hunt: Answers Caroline Moore his year's Treasure Hunt, which began on 1. 13 October and ran until Christmas, con- sisted of nine clues, each with three parts. The...

T o nightmares haunted me over the ilt months. The first was of the closing date drawing on, and no entries at the second — far more vivid and Probable — of 20,000 identical and...

Imperative cooking: what to do in bed

rr here's one question which always sorts 1 out the Chaps from the Girls. 'What shall we have tomorrow?' When a Girl asks it, it is a whining complaint: 'I don't know what to...