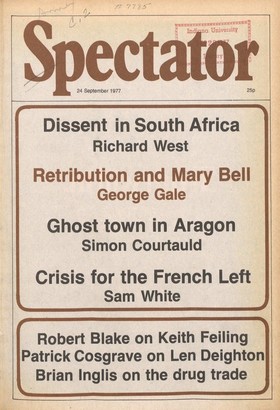 As a device to attract headlines and to divert attention frOm the closed shop dispute between the pragmatists led by Mr Prior and the ideologists led by Sir Keith Joseph, Mrs...

The bureaucracy that kills Ferdinand Mount Not so long ago, it seemed that every senior civil servant was 'intensely able' or 'deceptively brilliant'. On surfacing into the...

To those looking for economies I recommend strongly giving up the Sunday Papers. In the good old days we all used to take the Sunday Times and the Observer. Then came the Sunday...

Pour les miserables oisifs Auberon Waugh On the same day last week that the newspapers announced everything had changed — Britain was booming; the trade balance was reversed;...

Sam White Paris One had to be a considerable political innocent to believe that the united French Left would remain united for long after its apparently likely victory in the...

Simon Courtauld Thirty-five miles south of Saragossa, according to the map of Spain, is the town of Belchite. Approaching from the east a flat and featureless arable plain...

The strange death of Biko

Richard West Johannesburg The death last week in detention of Steve Biko has roused high passion in South Africa not just between blacks and whites but between Afrikaners and...

Rhodes Boyson There is no doubt in my mind that Mr Callaghan's Ruskin College speech on education, the subsequent regional conferences and the recent Government Green Paper all...

George Gale On the face of it, there was something shocking in the demand raised when Mary Bell escaped from her open prison that she should be locked up for life. She is now...

Christopher Dobson 'The extent to which you Make use of new envelopes in sending me old material is a distressing experience. I suggest that you use old envelopes and send me...

Robert Blake Sir Keith Felling, who died last Friday at the age of ninety-three, was a most distinguished historian who never quite received the credit that he deserved. To...

Exciting times Nicholas Davenport My guess was that the bull market in equity shares would burst through its previous top — 544 in May 1972 when the Heath symphony was being...

In favour of Sir Keith

Sir: In his article on 10 September on the Grunwick dispute John Grigg employs the argument so often used by apologists for the closed shop and the collective society. He...

Sir: I take exception to Political Commentary's patronising denigration of George Ward (10 September). With collectivism's ever-increasing grip on the throat of this country,...

Sir: Might someone who has at least some first-hand knowledge of the tourist trade, albeit in the humble role of a courier who over the past decade has had contact with tens of...

Sir: Your television column on 27 August was aptly headed 'Mythical'. Firstly, Dr. Stafford-Clark is not a psychologist. He was a consultant psychiatrist at Guy's Hospital....

Sir: Benny Green may profess a superior knowledge of Hollywood and Broadway (yes, and comic postcards too) than, perhaps, he imagines Eric Partridge does; but, in the vast...

Sir: Auberon Waugh has done it again. I agree with almost everything he writes until he knocks technology, and then he ma es my blood boil. Technology is an ugly word, so I will...

Sir: Some of us, and we are quite a tidy little company, who left the Labour Party, find ourselves looking at events quite differently to a cradle Conservative like Mr Grigg...

A battle refought Patrick Cosg rave Fighter Len Deighton (Jonathan Cape E4.95) I had better say at once that Mr Deighton's new book is interesting only in so far as it...

Brian Inglis Triangle of Death Frank Robertson (Routledge £3.95) Until a couple of years ago the control which Britain had maintained over the heroin traffic was the envy of...

Jan Morris A Time of Gifts Patrick Leigh Fermor (John Murray £6.50) There is no pretending that the Wandering Student retains his old allure. It is not that he is more...

Hans Keller The Trial Franz Kafka. A new translation by Douglas Scott and Chris Waller (Picador 80p) I have often talked about the mortal danger of translation in general and...

Mary Kenny Maud Gonne Samuel Levenson (Cassell £6.95) I approached this book, initially, with the prejudice of jealousy. I had been invited to do a biography of Maud Gonne in...

Peter Ackroyd An Artist and a Magician Hugh Fleetwood (Hamish Hamilton 24.25) The corruptibility of the rich is a favourite theme for writers and film-makers; ever since Scott...

Robert Lowell Patrick Cosgrave In 1969 I published The Public Poetry of Robert Lowell. Like, I suppose, any author of a first book, I waited in anxiety for the reviews. Two...

Outstanding John McEwen If you are in the slightest bit interested in visual art go without fail and see the exhibition of Thomas Joshua Cooper's photographs at the Robert...

Copy-cat Richard Ingrams One of the depressing things about both channels is the way they feel obliged to ape one another's successes. If ITV comes up With a rough, tough...

April autumn? Jeffrey Bernard The two days racing at Newbury last Friday and Saturday were something of a glut of horse manure what with staying in the place for two nights,...