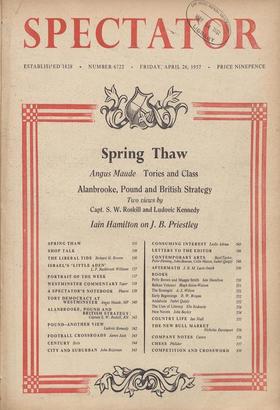 T HE publication of Marshal Bulganin's correspondence with Sir Anthony Eden over Suez and the sending of another long letter to the present British Prime Minis- ter, together...

By RICHARD H. ROVERE New York rTIHE President's budget is the big subject of controversy here. Everybody, including the President, professes to be shocked by the size of...

ONSERVATIVE MPs ought to have been duly embarrassed when they read a speech by Mr. Walter Padley, MP, in favour of the Government's Shops Bill; for Mr. Padley defended the Bill...

By L. F. RUSHBROOK WILLIAMS Eilat, April T o revisit Eilat today, after an interval of four years, is to come upon a community tripled in numbers, abounding in energy and...

EASTER has come and gone without, apparently, making much difference to the march of unpleasant events in the • Holy Land or indeed any- where else. The Jordanian crisis after...

That apart, it was a remarkable affair. The three major debates of Mr. Macmillan's premier- ship—on the social services, Bermuda, and the Budget—had all been won hands down by...

I WAS READING the other day a report, published In

the Paris paper L'Express, of a speech made at a Moscow Writers' Conference by the author Paustovsky. He describes a trip taken to the West in a Soviet ship by two groups :...

LAST WEEK in , two paragraphs on the preliminary proceedings of

the Adams case I quoted extracts from what prosecuting counsel had said, first When Mr. Lawrence, QC, applied to make an application in private and secondly when Mr. Lawrence...

THE SCHIZOPHRENIA Which has long affected Lord Beaverbrook's newspapers was

given another giddy twist on Wednesday. A leader-page article by Mr. George Gale discussed the suit for divorce filed by the Foreign Secretary. His point—that divorce is no...

FEW JOURNALISTS can have inspired more affection from his colleagues

than W. F. Casey. He became editor of The Times, he used to admit, as a stop- gap, because no suitable successor to Barrington- Ward was available; but he turned out to be a...

NOTHING HAS been more remarkable in Conservative politics than the rise of Mr. Duncan SandYs. He has still much to live down; his early politi- cal career being, to put it...

THE CHAIRMAN: 'If you wish to have the legal argument

discussion in camera regarding the admissibility of this evidence, we are prepared to hear that in camera, but at the moment we are not prepared to hold the evidence or the...

THE APPARENT discrepancy between the prosecu- tion's earlier attitude and

the attitude shown above is, I think, easily explained. The magis- trates' decision to hold the legal argument but not the opening in camera was as it stood illogical since, as...

By ANGUS MAUDE, MP A T the time of the Suez crisis, I remember s nnoticing that there were nine Ministers responsible for defence matters, and that of these eight were Old...

By CAPTAIN S. W. ROSKILL, RN (Retired) ALTHOUGH a private diary kept by a man who ,n participated in great events may be a valu- able contribution to history, it is unlikely,...

By LUDOVIC KENNEDY T ONLY once came into contact with Admiral 1Pound, and I have good cause to remember it. In 1940 the battleship Prince of Wales was bringing Churchill and...

By JAMES JACK El OUR years ago British football was in the doldrums. Humilated 6-3 by the Hungar- ians at Wembley, we lost the return match 7-1 in Budapest. The European and...

By STRIX F ACTS are wonderful things. I wish my mind held a larger store of them. I should like, occasionally, to be able to correct or even con- trovert statements made by...

SATURDAY, APRIL 28, 1832 MARSHAL SAXE computed, that in a battle only one ball of 85 takes effect. Others have computed, that only one in 40 strikes, and no more than one in...

By JOHN BETJEMAN On the PCC we learn with regret that old Hodge, the last man in the village who could use a . scythe, is giving up owing to rheumatism. The vicar is in favour...

By LESLIE ADRIAN A ' , TER yet another of those bumper-to-bumper Bank Holidays, spent on the roads in a blue haze of petrol fumes, I am not surprised to learn that more and more...

Sta,—Mr. Hollis assures us that proof of the Resur- rection

does not rest on a belief in the Gospels. He asks how any other story fits the facts. The question then arises, what facts? Mr. Hollis replies: the Appearances and the Empty...

QAT SIR,—In her letter which appeared in your issue dated

April 19, Miss Helen Cochrane has not got her facts quite right. The campaign against qat in Aden is being con- ducted mostly by young Aden-born Muslim Arabs who realise what...

SIR,' —Mr. Christopher Hollis began his account of 'Easter Morning' by saying, 'We must consider the story of the Resurrection on its independent merits and quite as objectively...

SIR,—May I draw your attention to the pligbt of the Hungarian writers who have put up so valiant a fight for the liberty of their own people and the mainten- ance of its links...

SIR,—What a pity Mr. John Osborne insists on looking down in anger on (thank you, Mr. Collin!) your observer's observation of an English play- wright. Has he no forward-looking...

S112,—Brian Inglis's article was excellent, and sounded a timely warning against physical methods of treat- ing mental illness. Your correspondent Phoenix was fortunate in...

SIR,--On a point of theology. In your leading article last week you said, 'To say that all men were and even should be treated as the sons of God was, therefore,, to initiate a...

'I shall be surprised if Dr. Eysenck, after reading it, does not agree that such work is worth a thousand scientific experiments.' He will. I have. It isn't.—Yours faithfully,...

S1R,—Mr. John Osborne is an Angry Young Hum- bug. He

has made his name and fortune by rejecting and deriding the conventions of our society. It is illogical for him to invoke those standards when he does not like what has been...

SIR,—In 'A Spectator's Notebook' of April 12, Pharos says that 'a potentially attractive programme like the Brains Trust has sometimes failed to attract even 1 per cent. on the...

SIR,—When Mr. Amis condescends to a reasoned attack on Milton, .Chaucer, etc., it will be possible for his opponents to satisfy Mr. Mandle with a reasoned refutation. As it is,...

'"JOLLY," 'Max Beerbohm wrote fifty years ago, 'is surely the right epithet for Mr. Oscar Asche's -production of As You Like It; and I think one might, without risk of...

THOUGHT the BBC's plans for Easter were excellent. Perhaps the most important unrecognised need the Corporation serves is to provide o o ritual for the unattached masses. The...

The Last of His Kind THE exhibition of drawings which the Arts Council has brought to its galleries in St. James's Square from the Ingres Museum at Montauban — demonstrating as...

f• 0. Theatre.) THE 12 Angry Men are members i k 4 1 of an American jury that will send an ei g hteen-year-old boy to the electric chair (no recommendation for mercy, the jud g...

IN the conditions that it works under, the erratic q uality of the Carl Rosa Opera Company is little to be wondered at. And that little is not that their performances are as bad...

The snow still falls in dry and powdery grains, Fills the green footprints on the whitened grass; A gusty wind still turns the weather-vanes, And whirls a frosted leaf about a...

Sea Warfare, 1939-45: A German Viewpoint. By Vice-Admiral Friedrich Ruge. (Cassell, 42s.) SEVEN-TENTHS of the earth's surface is covered by water. Whoever controls the sea in...

The Lost Opportunity. By Alexandre Cretzianu. (Cape, 18s.) MR. ALEXANDRE CRETZIANU is a distinguished Rumanian ex-diplomat, a member of the genera- tion that had just grown up...

" South from Granada. By Gerald 'Brenan: (Hamish Hamilton, 21s.) RETIREMENT to a remoter part of the world than one, by nature or education, belongs to involves psychological as...

THE wider, if not the greater, includes the less. For Professor Wright, 'culture' includes the theme developed with such learning by Professor Mori- son. But, for him, cows on...

I HAVE missed John Hearne's two previous novels, but after reading The Faces of Love I shall cer- tainly try to get hold of them. His characters are strikingly endowed with the...

The Uses of Literacy

Revolt on the Nile. By Colonel Anwar El Sadat, with a Foreword by President Nasser. Trans- lated by Thomas Graham. (Wingate, 12s. 6d.) THIS is a shortened translation, with no...

By IAN NIALL THOSE who are engaged in agriculture can never-be satisfied over the weather because conditions never suit all the complexities of their industry. If it doesn't...

We were driving up the rough track into the hills, and travelling slowly over the large boulders and loose stones exposed last winter, when I saw two hares directly ahead of us....

By CUSTOS THE stock markets were much quieter but still very firm after the • :* \ Easter holidays. The outstanding feature was the recovery in the gilt- edged market...

Most birds have young ones now, but some arc still nest-making, and the other day, while I was watching a jackdaw gathering paper from the road— they set great store by paper...

By NICHOLAS DAVENPORT THE average investor is incorrigibly lazy but I hope that he took time in his Easter holiday to look at his portfolio and review the changing investment...

Small seedlings and other plants sensitive to the effects of late frost can easily be protected overnight by a sheet of glass, polythene tacked on a frame, or even stout paper...

SPECTATOR COMPETITION No. 373 Report by H. G. Button Wolfe is reported tç have said that he would rather have written Gray's Elegy than taken Quebec. Competitors were asked to...

The usual prize of six guineas is offered for a