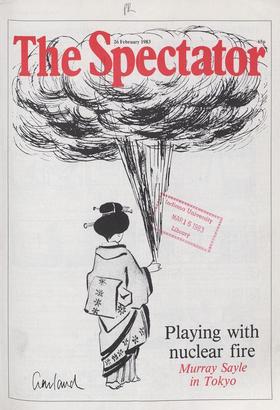 M rs Thatcher continues to say that she needs ten years, and this need is usually associated with her frequently in- dicated preference to serve out a full five- year term. 5 +...

Not a small folly Colin Welch W eirder and weirder have become some of Enoch Powell's contributions to the national debate. Those who follow him blindly on all his...

E ver since the Labour Party started mak- ing a fuss about the high proportion of Oxbridge entrants coming from public schools rumours have been rife about some sycophantic...

House of Horror Auberon Waugh rrthe time has come for me to admit an error. Before suggesting that Mr William Benyon MP had muddled his Com- mandments when he invoked the...

At the bottom of the harbour

Bohdan Nahaylo The pseudo-science of Andropology is turning up some rather sobering fin- dings. The initial empirical data are disap- pointing those theoreticians who against...

Mr D. Forrest, who says he has much experience of the Egyptian fellaheen, writes an extraordinary letter to the Times. He declares that it is useless to try to make Egyptians...

The winds of war

Nicholas von Hoffman Washington T he television leviathan has chalked up another record-breaking mini-series, a $40-million dramatisation of Herman Wouk's The Winds of War. We...

Christopher Hitchens San Francisco G ay politics in America are becoming recognised as a serious force. The homosexual constituency, which is concen- trated principally in New...

Nigel Sitwell I n 1970 I volunteered, in print, to throw myself under the bulldozers if work should ever start on the third London air- port at Foulness (later they called it...

Richard West C hannel Four television, having already ‘../brought us The Irish RM, has now justified its creation by showing a film, Mis- sion to Moscow, that I had heard of...

Danger: ideas at work Paul Johnson T he Guardian had a good scoop last Thursday, with its publication of con- fidential papers embodying discussions by senior ministers and...

Sir: Roy Kerridge, in his sneer at the oppos- tion to the Police and Criminal Evidence Bill (5 February), describes it as emanating from 'the newer New Left'. The British...

Sir: In his article 'Israel: the awkward truth' (19 February)

Christopher Hitchens is in fact saying that Israel was directly responsi- ble for the massacre in Sabra and Chatila, in the same way as a person who hires a hit man to do his...

Sir: Timothy Garton Ash suggests that all would be well if only Poland could be swit- ched round geographically with Germany (12 February). We once had the chance to try doing...

Sir: In his very kind article about the Survey of London (19 February) Gavin Stamp said the 'next planned volume' is to deal with Clerkenwell. The present intention is that the...

result of the Kahan Commission's findings. He feels that it vindicates his position, as if pleased that the Commission was necessary in the first place. What he conspicuously...

Israel's responsibility Sir: Surely your editorial (12 February) can- not have meant to imply that hawkish, ex- pansionist policies will 'improve Israel's security and...

A Utopian Zimbabwe Peter Taylor Under the Skin: the Death of White Rhodesia David Caute (Allen Lane £14.95) T he Rhodesian war and the elections which followed it are still...

Peter Quennell Hell-Fire Duke: The Life of the Duke of Wharton Mark Blackett-Ord (The Kensal Press £12.50) p ope was one of those great writers who immortalise their grudges,...

A. L. Rowse Caves of ice James Lees-Milne (Chatto & Windus £12.95) J ames Lees-Milne is a diarist as accomp- lished as he is beguiling. His previous two volumes of diary gave...

Elizabeth Jenkins Images of Hampstead Simon Jenkins and Jonathan Ditchburn (Ackermann £67.50) T his most beautiful book, though of especial fascination to those who know...

A. N. Wilson The Mystery of Georges Simenon Fenton Bresler (Heinemann/Quixote Press £8.95) G eorges Simenon boasts that he has had carnal knowledge of at least 10,000 women....

Peter Levi C ome years ago, the Hungarian govern- ment forbade the translation of an English novel because it failed to show the emerging peoples of the third world in their...

No comparison John McEwen Peter Blake and James Barry: the Artist as Hero (Tate Gallery till 20 March. Barry's mural 'The Progress of Human Culture' can be viewed throughout...

Unreal images Peter Ackroyd Identification of a Woman (`18', Camden Plaza) T his, we are told, is the first film which Michelangelo Antonioni has set in Italy for some 20...

Getting away Taki New York T his is my last week in this ghastly place. Never have I seen ruder people anywhere, not even in Moscow. Last week I gave a dinner for my friend...

Tripe, no onions Richard Ingrams T have refrained hitherto from casting aspersions on the BBC's early evening newscasterette Miss Moira Stuart for fear of protests from all...

Taxing Jeffrey Bernard T f there are as many as 1,760 readers of 'this wretched column with current ac- counts in the black I'd be obliged if they'd sponsor me to run a mile...

Great frocks Patrick Marnham °There is no doubt that Porter enjoyed the Young Designers' Show at the Park Lane Hotel; although this is the first time he has been out of the...

Commonwealth Raymond Keene Melbourne D uring a trip to Nigeria in 1980 the thought came to me that it would be of great benefit to chess in much of the English-speaking world...

No. 1258: Dear Pam ... Set by Jaspistos: Denis Thatcher's i M- aginary letters to his friend Bill are a favourite feature of Private Eye. A letter, please (maximum 150 words),...

Jaspistos reports: Competitors were invited to describe in verse the performance of some modern sportsman through the eyes of a Romantic poet. The Romantics were not a natural...

A prize of ten pounds will be awarded for the first correct solution opened on 14 March. Entries to Crossword 596, The Spectator, 56 Doughty Street, London WC1N 2LL. 10 Ur...

A private Parliamentary Bill which would have required newspapers to print a correction of equal size and prominence whenever it was said that they had printed an inaccurate...