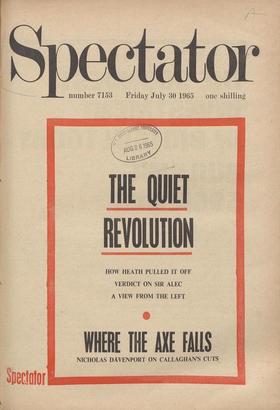 -- Portrait of the Week ' PROM NOW ON expenditure will be

kept at a level which we as a nation can afford.' The Government chose a strategic moment to reverse its pro- gramme. Mr. Callaghan's pledge of July 15 CI am not now...

T HE Tories' cautious flutter with for- malised democracy in choosing their leader has' worked with smoothness and despatch. The party, weary of arguing up hill and down dale...

How Heath Pulled It Off By ALAN WATKINS T HE scene on Tuesday morning was, in its way, as remarkable as anything to be found in Disraeli's novels. Indeed it would take the pen...

View from the Left

Encouraging the Others By ROY HATTERSLEY, MP C o it was more than just 'silly season gossip' °after all, and Mr. du Cann's rejection of the abdication rumours less than a week...

By DAVID M. CULHANE* ' r is a splendid fancy to imagine Lyndon Baines Johnson with his feet up on the table in the Commons, preparing some devastating verbal ploy against his...

From RUPERT HALE STOCKHOLM M EMBERS of the British Labour party often admire the Swedish Social Democrats who, besides manipulating society successfully to their own ends,...

A Matter of Judgment

By R. A. CLINE T HE vote by the House of Lords to abolish capital punishment was a highly dramatic moment in the career of anti-hanging legisla- tion. But now less colourful...

Dog Lobby On my left, Charles Pannell, Minister of Works;

on my right, Lady Parker of Waddington and 200 other dog-owners who live near the Palace of Westminster. The dispute is over whether dogs must be on the lead in Victoria...

Unsigned I have just managed to track down the exhibi-

tion of water colours and drawings—anyone you care to name between Fra Angelico and Turner —at the British Museum. Acting on information from at least five helpful attendants,...

A remarkable document has just appeared on My desk, I am not sure where from. Rather lavishly produced and carefully laid out, it is called 'The Myth of Afro-Asia (The Indian...

going on now for nearly nine months. They are seriously damaging the country's economy and keeping out foreign investment. Yet this week the mission of Gibraltarian ministers...

TIHE most remarkable feature about the run-up to the vote for the Tory leadership is that everyone has been so silent. Television and the press have been hard put to it to keep...

Ode day last week I dined with my wife and two friends at one of London's best restaurants. After dinner, I lit a cigar, the women smoked cigarettes and the man a pipe. Within...

Who Will Face The General?

From DON COOK PARIS N ATO is next on President de Gaulle's list. This is not a particularly new journalistic discovery, but all the same, the ruthless fashion in which the...

By HUGH O'SHAUGHNESSY W ITH scarcely a murmur, Admiral Americo Tomas was elected President of Portu- gal on Sunday for a second seven-year term. The lack of trouble was not...

23), Sir Donald Stokes left out some of the darker shades, such as the neglect: of Modern: marketing methods by ,British motor .manufacturers in their principal export markets,...

is surprising to find in 'the columns of the Spectator endorsement for the McCarlhyi.te attempts by the authors of The Pitppeteers to smear those who campaign. against white...

Strix on Sleep Sia,—Strix, in last week's Spectator, puts a

hypo- thetical question: 'If ever they include a sleeping con- test in the Olympic Games.' In 1960, it was easy to buy in airports and elsewhere in the United States badges with...

his article last week that savings are declining. This per- ha ps is hardly surprising when modest attempts to sav e are actively discouraged. Seeking, last weekend, a...

SIR, —An ex-inmate of Holloway Prison tells me -that on her arrival at the main gate a wardress gloatingly drew her attention to a small mound under which are buried the remains...

`Armstrong's Last Goodnight' SIR,—For your dramatic critic to state that

the current , production of Armstrong's Last Goodnight at Chichester will never be bettered is surely to beg the question. The play was first performed at Glas- gow Citizens'...

Sexual Freedom SIR,--Sarah Gainham's attempt to inject a shot of

-realism - into the debate on sexual morality has failed for rather elementary reasons; She interprets the sexual promiscuity of the young as the natural outcome of the last war...

of July 23 seems to me extravagant and unjust. A de- tailed defence must be left to Dr. Holloway or some other authority on English literature, but may remark that such...

Confusion SIR,--Qubodle may take comfort. I once introduced the late

Prophet of Blitzkrieg SIR,—The review by General S. L. A.

Marshall of Captain Liddell Hart's Memoirs in the June II issue was interesting but, unfortunately, somewhat • inaccurate. Marshall's one 'quibble' is hardly a quibble at all,...

Lib-Lab Pact SIR' --- Quoodle has got a nerve to complain

about the Liberal voting record on the Finance Bill. Out of 108 divisions on the Bill and the budget reso- lutions, Mr. Macleod missed forty-eight himself. For the record,...

The Triumph of Time B y BRYAN ROBERTSON I r is agreeable to report at once that the small (uncatalogued) Figurine of 1965 in plaster by Giacometti is as lively, alert and...

SIR,—Simon Raven (and other writers) should learn that in the Edwardian era straw huts, unless worn by women, were not called boaters. 21 Blacket Place, Edinburgh 9 G. A. S....

SIR,—Being on -my travels, 1 have only now seen Dr. Conor Cruise O'Brien's reply, in your issue of March 26, to my letter to you about his view of the Hiss case. In spite of the...

Big Ideas B IG ideas about how to change and improve the West End of London have not been plentiful during the last twenty years. On the official side there has been a positive...

By D. W. BROGAN ovus Orel° Seclorunt—the . infant United States chose this Virgilian tag as the motto no its great seal (although it was only in the twentieth century that it...

The Anglo-Irish Treaty. By Frank Gallagher. Edited with an introduction by Thomas P. O'Neill. (Hutchinson, 40s.) THE last chapter in Ireland's struggle for inde- pendence was...

By JOHN BAYLEY E real subject of theology is not so much divine truth as human compulsion, not the ways of God but the needs of man. Even believers are apt to recognise this in...

The Catkin and the Icicle : Aspects of Russia. By John Gooding. (Constable, 30s.) THIS book is a joy. 'As historian, Russian- speaker, poet in prose, John Gooding has written...

The Battle of El Alamein. By Fred Majdalany. (Weidenfeld and Nicolson, 25s.) IN his preface to the 1930 edition of his already famous book, Edmund Blunden modestly re- ferred...

NEW PAPERBACKS : The Kindly Ones. By Anthony Powell. (Penguin,

The New Cuts By NICHOLAS DAVENPORT I its latest survey of the British economy, the 'OECD, the economic organisation of twenty- one nations, meeting in Paris, had this acid...

By CUSTOS T announcement that more deflationarY measures were coming this week had a sharp effect upon an already nervous equity market and the Financial Times index fell over...

By LOTHBURY S INCE the date of the last accounts from Longbourne Holdings this tea company has acquired another, namely Allynugger Amo and Lungla (Sylhet) Tea, so that last...

By LESLIE ADRIAN Today. they are much more likely to be holding their forefinger daintily on the button of a plastic cylinder as it obediently atomises into the atmosphere a...

By ALAN BRIEN `THINK about death?' ob- served Brendan Behan to me on one of his many death - beds. 'Bigod, I'd rather be dead than think about death.'I have printed this...

SOLUTION TO CROSSWORD No. 1180