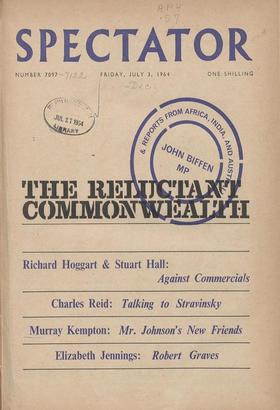 The Politics of Commuting

M R. WILLIAM DEEDES, who apparently aspires to the role of Homespun Philosopher in the present Administration, reflected recently: 'Ultimately what is going to decide this...

THE situ( SEASON began earlier, with the headlines filled with

the High Court's decision that the froth on a Guinness is part of the pint, with a Policeman who told a lady rushing to raise the alarm after a Burlington Arcade smash and grab...

DONALD Holm writes from Sydney: As with most other things in Australia, atti- tudes to the Commonwealth will change with the coming change in political generations. Aus- tralia...

T ILLS week the Spectator prints three reports on the prospects for next week's Common- wealth Prime Ministers' Conference, together with John Biflen's contribution to the...

K u rit Kne writes: The Commonwealth is not, frankly, in the fore- front of Africans' minds. Membership has for them an element of anomaly since any undue stressing of it in...

Holy Warfare By DAVID ,WATT A NYONE anxious to savour some of the more terrifying privileges of a minor King of Judah (or Israel) should hasten forthwith to the chamber of...

CHANCHAL SARKAR writes from New Delhi: It was Sir Alec Home who conceded recently In a speech in Nigeria that if a more purposeful and tangible form of association couldn't be...

From MURRAY KEMPTON WASHING" ON W HEN they elect Presidents, Americans can think of nothing else. October of 1956 remains to most of us who are journalists the month when Suez...

From BERTRAND DE JOUVENEL PARIS TT is, and rightly, an essential feature of a free 'country that any person or group should at any time be able to voice complaints and pro-...

There has been at least one useful lesson from the Beatles' world tour. We now know from the hysterical reception that they received almost everywhere that the youth of America,...

Seen outside a large garage near Baker Street: a revolving pedestal bearing the inerediblY shattered wreckage of a Wolseley 1500 con- vertible. For- this driver it must have...

In a year when political writing is likely to be more partisan than scholarly, I find the pub- lication of Geoffrey Block's A Source Book of Conservatism by the Conservative...

LAST week, the Spectator, in a leading article, joined the ranks of the 'don't' knows' about what to do with South Africa. Since then, another problem child of apartheid has...

B Y CHRISTOPHER HOLLIS 'These bookAh chaps seen, to worry about Ihe cosmos so: — P. G. Wodehouse. The world is too much' with them; bookish chaps, Worrying about the cosmos...

It is sad that the match 'Champion County v. The Rest' has disappeared from the cricket calendar. The reasons were obvious enough: the season, except for festival cricket, was...

It was on a visit to the United States in December, 1958, that I first became convinced that Arnold Beithman ran the country. Wherever I went, he was there. Whenever I appeared...

Saved: • Just as the villain (me) was binding the

hapless maiden of the BBC to the rails, up gallops the hero in the unlikely person of Mr. George Elvin. The news of the strike on Independent Television was reported with...

The Right Sort of Change?-4

IS THERE A COMMONWEALTH? By JOHN RiFFEN, MP D OES any major political party in Britain wish to inherit the mantle of Empire some- time worn by Joseph Chamberlain and Lord...

What Shall We Do with the BBC?'

Against Commercials By RICHARD HOGGART and STUART HALL O F the arguments in favour of commercially financed local radio the simplest says that it would be 'free.' If this means...

SIR,—Your story of how General Haynau was v, el- corned

in Southwark is of interest, but his visit to Barclay's brewery and its aftermath is, I think, of far greater importance. When visiting this establish- ment, famed for its...

SIR,—Quoodle's indignation at the Observer's alleged insensitivity to left-wing totalitarianism happens to be misplaced. The Observer was, after all, the news- paper which...

A TASK FOR YOUTH SIR,—I write as one who has

for fifty years dealt with young people and with the aged, and it is from the experience I have gained in both fields that I write in support of the magnificent work done by Mr....

By RANDOLPH S. CHURCHILL T EN days ago, Mr. Gavin Astor, the principal proprietor of The Times and chairman of the Commonwealth Press Union, said: 'Press and public alike must...

SIR,—My intention was not to deflect this corres- pondence away from Covent Garden and St. James's Square to Park Place, Cardiff. But obviously some guilty consciences have been...

IN PRAISE OF APARTHEID

SM.--There arc numbers of people in the United Kingdom whose views about apartheid are very seldom allowed to be publicised by the national press. These people, of whom I am...

SIR,--Quoodle's tribute to Dr. Ian MacQueen (Spectator's Notebook,' June 26) struck just the right note. We do hold the medical man in the high- est possible regard. It is all...

SIR, — I am sorry to have to trouble you for the second week running, but really Quoodle cannot be allowed to get away with it. The argument concerns the proportion of enter-...

ILLEGITIMACY Sim,.----In view of Lord Attlee's recent reference to the

illegitimacy of J. H. Thomas. and to the corre- spondence which ensued, and in particular, in view of A. S. B. Glover's suggestion that the only persons besmirched by...

By CHARLES REID Stravinsky has recorded The Rake once before. On that occasion, ten years ago, he had an all-American chorus who turned Baba the Turk into Baba the Toik. He...

SIR, — In your article on June 26 about Britain and South Africa you say that the Economist the week before 'came out in limited support of economic sanctions, a course that...

Si,—Like others who 'don't know' about South Africa, the Spectator

makes one crucial analytical mistake. You fail to distinguish between the general commitment to 'white supremacy' and the policy of apartheid, which is merely the present...

AFTER a year's run, Oh What a Lovely War bowed out last week, and the theatre will be all the drabber without it. Paying a farewell homage visit, I was still as moved as on the...

DUBLIN is eighty minutes by air from London. Yet the Irish National Gal- lery's superb collections in Merrion Square remain, in its centenary year, less frequented by Londoners...

The Face of 'War. (Berke- ley; 'X'certificate.) Won- derful Life. (Empire; IP certificate.) IN a week of high jinks and musicals comes a Banquo's ghost of a film, Tore...

Directed by the designer, Norman McDowell, London Dance Theatre aims at something no British company has ever tried for before--- smartness. It obviously wants to be chic,...

Robert Graves By ELIZABETH JENNINGS R OBERT GRAVES has achieved his high repu- tation late in life. It was not until the 1950s —with the poets of the so-called Movement and...

It was raining. That much I remember. Warm rain that only damped my skin. Seeing you, unexpectedly, across the street I wished my hair`were neat. You crossed, we talked. It...

Nationalism and Communism: Essays 1946-63. By Hugh Seton-Watson. (Methuen, 36s.) A MARK of the times is the proliferation of learned conferences. The American Foundations, who...

The fleshy petal Shivers descendingly to Moor on the mirror of the wood; fingers of the breeze Detached it to feather - The sea of the room. A sudden light And windfall and...

Bourgeois Anonymous. By Morris Philipson. (Deutsch, 21s.) PERHAPS the only kind of book worth writing, as Mr. Cyril Connolly once asserted, is a master- piece. I sympathise, but...

IT'S 'just a touch of Second Sight,' consoles Rita's mother. `There's lots have it and they think nothing of it.' But Rita's powers are not the kind that can be tamed into...

Investment After October By NICHOLAS DAVENPORT AT the moment of writing equity shares on the Stock Exchange are toss- ing about in a fever of indecision induced by our...

By LOTHBURY O UTSTANDING results once again from Butt ins, the holiday _camp and hotel proprietors. Trading profits for 1964 shot up to £4.9 million from £4.05 million and the...

By CUSTOS /rile gamble in steel shares goes on, but it 1, is hardly fair to call it a gamble. It rep- resents a shrewd assessment of the political and financial situation...

Putting the Heat On By LESLIE ADRIAN WIMBLEDON fortnight, the- oretically the sunniest spell of the year, heralds the heating industry's great midsummer spending spree —an...

By ALAN BRIEN A SOCIAL scientist is the kind of scientist who tells you some obvioUs fact "r about the world you live in which you have known all your life hut when you say,...

By MARY HOLLAND . My most immediate memories of those Wimbledon days are of sitting in the baking heat of a West End cinema, growing sick on choco- lates and watching an...