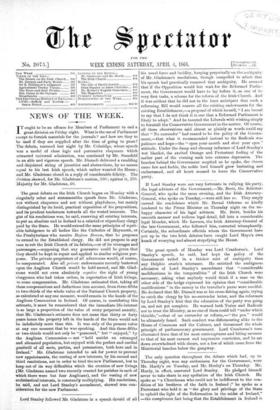 The great speech of Monday was Lord Cranborne's. Lord Stanley's

speech, he said, had kept the policy of the Government veiled in a thicker mist of ambiguity than any Delphic oracle's utterance. He satirized the ambiguous admission of Lord...

If Lord Stanley were not very fortunate in rallying his

The great debate on the Irish Church began on Monday

with a singularly sober and statesmanlike speech from Mr. Gladstone, not without eloquence and not without playfulness, but mainly distinguished by its lucid, practical...

TT ought to be an offence for Members of Parliament to end a great division on Friday night. What is the use of Parliament except to furnish materials for the journals ? and how...

The only speeches throughout the debate which had, up to

Thursday night, won any enthusiasm for the Government, were Mr. Hardy's on Tuesday, and Mr. Henley's on Thursday. Mr. Hardy, in effect, answered Lord Stanley. He pledged himself...

Lord Stanley followed Mr. Gladstone in a speech devoid of

all his usual force and lucidity, harping perpetually on the ambiguity of Mr. Gladstone's resolutions, though compelled to admit that his speech had practically removed that...

Congress certainly has the courage of its convictions. It has

Mr. Osborne, on Thursday, used his wit with effect, and

for once did not allow it to degenerate into buffoonery. His reply to Lord Stanley was the very best " hit " made in the debate. "In fact, almost in the words of his great...

Mr. Bright's speech on Tuesday was in his most improved

and conciliatory manner. Its objects were twofold, to show that Government by minority, such as Mr. Disraeli is trying to carry on, is fatal both to Government and opposition,...

It is curious how the Liberal Cave on the Irish

resolutions has caved in. Mr. Watkin has been called very peremptorily to order by his election committee at Stockport, and has caved in at once, promising to put his amendment...

It was rumoured in the early part of the week

that Mr. Lowe was going to form another "Cave," but the rumour must have been circulated by some one who does not understand Mr. Lowe. He hates priesthoods as hard as he hates...

A telegram has been received by the London correspondent of

the New York Herald, saying that Sir Robert Napier has reached Ashangi, that an unfriendly chief is in front of him, and that the country has been desolated. Sir S. Northeote...

Mr. Henley's short and, as usual, rather strongly flavoured, coarse-grained

speech on Thursday night went even beyond Mr. Hardy's, as it argued that it was the duty of the State to set apart a fund for the propagation of what it deemed religious truth...

Even Mr. Roebuck, who, like other flints, is most luminous

when hardest hit, has been obliged to yield to the enthu- siasm of his constituents. Enthusiasm burns, and ffint calcines, and so Mr. Roebuck, who had prepared a bitter speech...

A Conference was held this day week at the Architectural

College, Conduit Street, on the proposed residential College for Women of which we gave our readers a brief notice some weeks ago. The Dean of Canterbury took the chair, and it...

Mr. Ward Hunt introduced his Bill enabling the State to

absorb the Telegraphs on Wednesday. Mr. Hunt made a very poor speech, apparently from want of time, but we hope to discuss his Bill more fully next week, when we shall not be...

Belgium has been the scene of serious riots, chiefly in

the mining district round Charleroi. The miners are, it is said, overworked, being often engaged from 4 a.m. to 9 or 10 p.m. ; they have the sympathy of the labourers, and have...

A telegram was received in town on Thursday from Lisbon

announcing, on the authority of a despatch from Rio, dated March 9, that the Brazilians and their allies have passed Humaita and taken Assumption, the Paraguayan capital....

Last Saturday the Liberals presented their testimonial to Mr. Brand,

the late Liberal whip, who has probably come out of that -difficult office with hands more completely free from stain than any predecessor, and yet who has been regarded...

The House of Lords has accepted the amendment to the

Mutiny Act abolishing corporal punishment, and the Duke of Cambridge, in a sensible but timid speech, pointed out the position in which the Army was now placed. Flogging was...

An imperial manifesto, in the shape of a letter to

Yesterday and on Friday week the leading Foreign Bonds left

THE DEBATE ON THE IRISH CHURCH. T HERE is a heart once more in our political life, a heart which swells and trembles. Nothing is more remark- able in the splendid debate which...

S IR R. PHILLIMORE, himself confessedly a warm Ritualist, as the whole tenor of his judgment proves, has made a great effort to be impartial in his judgment on the Mackonochie...

I T might be a good thing, though we do not ourselves think so, if the Tory party were extinguished ; it cannot be a good thing that it should be reduced to a condition of moral...

T HE meeting held on Saturday at Willis's Rooms to consider the condition of the Agricultural Labourer was a noteworthy sign of the times, but we cannot say the resolutions...

THE PEERS AND THEIR PROXIES.

T HE formal abolition of Proxies by the Peers, which was effected on Tuesday night, through a new Standing Order, without a division, marks, we suspect, a turning-point in the...

MRS. GAMP AT THE OLYMPIC.

M R. J. CLARKE has achieved a certain success in the deli- neation of Mr. Dickens's greatest character, —Mrs. Gamp, —but he has produced the character with such " modifications...

T HE period immediately following the martyrdom of Edmund, King of

the East Angles, is one of great obscurity, owing to , the constantly swelling tide of Northman invasion. We are told - that his brother, Edwold, declined to maintain the...

DAVID GARRICK.* WE scarcely know whether to be grateful for this bulky life of Garrick or to lament its publication. A good biography of the most conspicuous, if not the...

[To THE EDITOR OF THE "SPECTATOR."] SIR,—The usual and most telling argument against the mainte- nance of the Irish branch of the United Church is that it is hated by the great...

[To THE EDITOR OF THE "SPECTATOR."] Sin,—As the character of every public man, especially of such a man as Mr. Gladstone, is of great interest to us all, I wish to say how an...

NOTHING that Dr. Stanley has written on ecclesiastical politics shows more of the political strength, wisdom, and sagacity which are so rarely found in combination with such...

MR. KEBBEr. had no need to excuse himself for publishing these sketches on the ground that he had originally intended them only for the use of Mechanics' Institutes,—to fill an...

MERE must be a special providence that watches over magazines, if we may judge from the way in which, every now and then, they seem to defy their readers. One magazine trades...

Standzrd Essays on State Churches. (Miall.) — These essays are

published by "The Society for the Liberation of Religion from State Patronage and Control," and are reprints, some dating from the earlier years of the century. The names of...

M.D. (Triibner.)—Before we can even read this book we must have a Lexicon Dohertianwn to enable us to translate its words into some language with which we are acquainted. We are...

Outlines of Physiology, Human and Comparative. By John Marshall, F.R.S.

2 vols. (Longmans.)—So far as we can judge, this work is executed with much completeness, and presents "a concise but compre- hensive summary of modern Physiological Science."...

The Government of England: its Structure and Development. By W. E. Hearn, LL.D. (Longmans.)—This elaborate work comes to us from Melbourne, in the University of which town Dr....

its dishes must be to eat. As a general rule,

English cookery-books are too dry and practical. The result is, that they are only consulted when that is absolutely necessary, when there is some question as to the time of...

strike out a path for himself and to avoid,the conventionalities of modern fiction, the author of Tom Marchmcmt has merely discarded the elements of success in novel-writing. He...

snow while crossing the Alps spend their time in telling

stories. Most of the stories might really have been told under such circumstances, and almost need for their appreciation a similar imprisonment in the hospice of the Great St....

The Old Lieutenant and His Son. By Norman Macleod, D.D.

(Strahan.)—It is out of no disrespect to Dr. Macleod that this story has lain some time on our table without being noticed. With some books the mere fact that they have been...

Sales Attici ; or, the Maxims, Witty and Wise, of

Commentaries upon Martial Law. By W. F. Finlason. (Stevens and

Sons.)—In his masterly charge to the grand jury on the Jamaica ques- tion, the Lord Chief Justice made especial reference to a work of Mr. Finlason's, written between the...

How to Study the New Testament. The Epistles (First Section).

By Henry Alford, D.D. (Strahan.)—A short time ago we noticed the first part of this book, which dealt with the Gospels. The style and method of this second part are almost...

Blackett.)—It is a hazardous experiment killing off the heroine at the end of the first volume, and advancing another young lady to the vacant post with a view of resuscitating...

A Memoir of Lady Anna Mackenzie, Countess of Bakarres, and

after- wards of Argyll, 1621-1706. By Alexander Lord Lindsay. (Edmonston and Douglas.)—The interest of this book is scarcely biographical, but it is real. Lady Anna Mackenzie's...

Jeanie's Quiet Life. By the Author of St. Olave's. 3

vols. (Hurst and Blackett.)—Jeanie's life is so very quiet that we hear scarcely any- thing about it, and what we do hear is somewhat insipid. If any of our readers have the...

Weekday Sermons. By R. W. Dale. (Strahan.)—Men who are too

busy to go to church daring the week would like to hear some of these sermons from the Sunday pulpit, and would profit by the advice con- tained in them. Some of the ethical...

Discipline, and other Sermons. By the Rev. Charles Kingsley. (Macmillan.)—These

sermons have the merit of being short, but even short sermons might be worked out, and Mr. Kingsley does not seem to have taken that trouble. He has thrown out some new ideas...

The Westminster Confession of Faith Examined on the Basis of

the , other Protestant Confessions. By Joseph Taylor Goodsir. (Williams and Norgate.)—This is an impugnment of the Westminster Confession of Faith on the ground of its teaching...

Climbing the Hill. By the Author of A Trap to

Catch a Sunbeam. (Groombridge.)—When we have copied out the description of the author of this story, and have stated that the subject of her new book is the happy beginning of a...

St. Patrick,, the Missionary of Ireland. By Joseph S. Smithson.

(Hamilton and Adams.)—Little is to be told of the life of St. Patrick, and Mr. Smithson has not told that little in a style that commends itself. Some of his interjections are...

Obstacles to Missionary Success among the Heathen. An Essay which

obtained the Maitland Prize for the year 1867. By William Saumarez Smith. (Macmillan.)-In this essay we have a history of various attempts to disgust heathen nations with the...

The Fall of the Confederacy. By John Baker Hopkins. (W.

Free- man.)-This is an able little book, and, better still, it is studiously moderate. The main objection to it is that it is wise after the event, and is given to predicting...