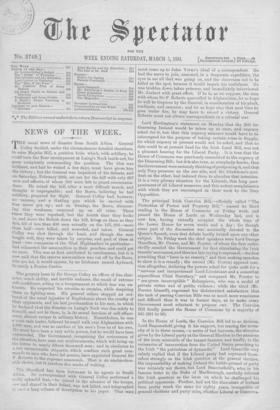 T HE usual news of disaster from South Africa. General Colley decided, under the circumstances detailed elsewhere, to seize Majuba Hill, a position from which, with artillery,...

The country loses in Sir George Colley an officer of

fine char- acter, much ability, and terrible rashness, the result of extreme iielf-confidence, acting on a temperament to which fear was un- known. He respected his enemies as...

The Standard has been fortunate in its agents in South Africa. Its correspondent with General Colley performed a really splendid feat,—he joined in the advance of the troops,...

In the House of Lords, the Coercion Bill led to

no division, Lord Beaconsfield giving it his support, but tracing the neces- sity of it to three causes,—a series of bad harvests, the stimulus given by the Liberal party at the...

*** The Editors cannot wndertalce to return Manuscript in any

The principal Irish Coercion Bill,—officially called "The Protection of Person

and Property Bill,"—passed its third reading in the House of Commons on Friday week, and passed the House of Lords on Wednesday last, and is now law, having virtually occupied...

Lord Hartington's statement on Monday that the Bill for disarming

Ireland would be taken up at once, and urgency asked for it, but that this urgency measure would have to be interrupted for the purpose of taking certain votes in Supply, for...

The Government has taken a step which it will find

very difficult to defend, It has superseded. Sir Evelyn Wood as second in command in South Africa, appointing Major-General Newdigate, who, if Sir F. Roberts is shot or falls...

In the course of his speech, Sir W. Harcourt contrasted

Mr. Dillon's manliness in reiterating, under all circumstances, the language he had once uttered, with Mr. Parnell's flight to Franco, and amidst great laughter, quoted the...

Mr. Forster, having gone to Dublin, to enter on his

very unenviable respeuaibilities under the new Coercion Act, Sir William Harcourt on Tuesday moved the introduction of the Irish Disarming Bill in a apoech of too much Blimp-...

- • ----- The debate of Tuesday and Wednesday resulted

in a con- siderable scene, when the discussion on the second reading of the Arms 13i11 was resumed, on Thursday, and Mr. Parnell reappeared, though he took hardly any part in...

Of couise, this wild speech, which contained much to tho

same purpose, brought up Sir William Harcourt in his most triumphant and irritating mood, to presii home the argument. furnished by Mr. Dillon's speech, and to denouuce the...

Sir William Harcourt was asked on Tuesday, in the House

of Commons, by Mr. Schreiber, whether it were true that he bad received. a telegram, purporting to come from John Devoy, threatening him with assassination ; and if so, whether...

The Cape Government is evidently determined to have its own

way with the Basutos. The tribe were willing to yield to the Crown, but not to the Cape Colony, and they had reason. On the declaration of the armistice, the Colonial Ministry...

In a letter to Monday's Times, Cardinal Manning brings before

the English public the folly of the French Republican Government in requiring from all the Roman Catholic Mission- aries either five years' service in the Army, or the...

The papers have been full of the marriage of Prince

Frederick Williams—eldest eon of the Crown Prince of Germany, ultiniato heir to the throne, and twenty-fifth in descent from Conrad, the founder, who won Ntirnberg,—with the...

The Lords have decided, it is said, to give the

Government a little slap, by passing a vote of censure on them for not retaining Candahar. The debate opened on Thursday with a long speech from Lord Lytton, who, having in his...

James Lowther by a majority of $0, the numbers being 3,071 to 3,04.1. The numbers are not high. Mr. Howard polled less by 12 than the lowest Liberal successful at the election...

We publish elsewhere an account of Mr. Childers' Army proposals,

made on Thursday, but may note here that it was received with unusual warmth of approval by Members who specially represent the Army.

Lord Derby was followed by Lord Salisbury, in a speech

chiefly remarkable for sneers at exhortations to morality between States as "the delicacies of civilisation," and at Russia for not appreciating those delicacies. He refused all...

Nothing advances at Constantinople. The Ambassadors express their views, and

it is said the Emperor of Germany expresses his views in autograph letters to the Sultan, and the Grand Divan express their views, but none of these views are known, and none...

The literary event of the week has been the publication

of Carlyle's reminiscences of his father, of his wife, of Lord Jeffrey, Southey, and Wordsworth, besides incidental notices of a good number of well-known literary men and women...

TOPICS OF THE DAY SIR GEORGE COLLEY'S DEFEAT. T HE causes of the newest disaster in South Africa are, we fear, far more clear than its ultimate results. Every motive, good and...

THE LIBERALS AND THE SITUATION.

T HE Liberal Party have no grievance against the Govern- ment,—which has contended with the embarrassments of a very complicated situation with all the strenuous tenacity of a...

W E do not hesitate to say that if the people of England could read the speech made by Lord Lytton on Thursday on Candahar, together with his Minute of September, 1878, on...

T HEATRICAL quarrels have commonly more interest for the public than most disputes which have 'so do with private concerns, and if ever a lawsuit was made amusing by its...

IATErLE all people of good-will and good-sense in Ire- land and elsewhere were anxious on Monday night to hear the statement of the Minister for War, to which exceptional...

T HE Address delivered by Sir James Paget to the students preparing for ordination at the clergy school of Leeds, which has just been published by Messrs. Rivington, might very...

T HE West-End tradesmen of London are trembling for their Long-Credit system, which is, they think, threatened from all sides. No sooner have they convinced themselves that...

O UR Fish supply is a subject of the greatest importance to every one interested in the welfare of the nation. Legis- lation seems endless, Bill after Bill appears to confuse ad...

RETREATS. • [TO THE EDITOR OF THE SPECTATOR."] 'Sfa,—Retreats are too valuable to the cause of real religion, daward and practical, to be damaged by such a champion of that...

ABBE' MARTIN AND THE RITUALISTS.

[To THE EDITOR or THE "SPECTATOR."] SI11,—li is due to the position and undoubted sincerity of the Abbe Martin that I should offer some observations on his letter published in...

LORD CAN Tuns autobiography of the author of the" Lives of the Chancellors and the Chief Justices" rivals in interest the most interesting of the series. Few men who started...

A SLUGGISH little stream, that loiters slow Between gnarled tree-trunks and thick tangled grass. And giant reeds, in a deep, wet morass For many a league, screened from the...

go THE EDITOR OF THE SPECTATOR:'] Snt,—With reference to Dr. Smith's letter, which appears in your last issue, it may be well to explain that we have pub- lished the new and...

BEFORE THE SPRING. Tun wind has blown the last year's leaves- From off the primrose head; The lilac-shoot its prison cleaves; The elm-tree tips are red. And all about, though...

MR. SWINBURNE'S "STUDIES IN SONG." Ir is impossible to read

Mr. Swiuburne without feeling the conviction growing upon you that he is a greater writer than thinker ; that the idea is too slender to hold the magnificent tide of poetic...

THE life of Amalie von Lasaulx, better known under her con- ventual title of Sister Augustine, is interesting alike from the circumstances in which it was passed, and. from the...

LIVINGSTONZ'S life is likely to be read in one hape or other as long and as widely as that of any man of this century ; and he who writes it aspires, at any rate, to supply...

NONE of the Magazines are very good this month. The most 'conspicuous and perhaps valuable paper is Sir Garnet Woleeley's outspoken defence of short service, as against long...

Fixed as Fate. By Mrs. Houston. (Hurst and Blackett.)—This is the autobiography of a young lady who is extremely desirous of marrying her brother-in-law, General Mereilyth ; but...

Paul and Co.)—This little book will not, we fear, be readily " under- stauded " of the "homely men" for whose use the author prepared it. They must learn an English tongue very...

A Treatise on Fuel. By Robert Galloway. (Triihner.)—A page or

two of index would have made this little book more useful for reference. But it will doubtless prove serviceable to many persons to whom larger and more comprehensive treatises...

England from a Back Window. By James Bailey. (Cecil Brooks

and Co.)—There is a mixture of joke and earnest in this book ; and the earnest is somewhat the better of the two. The jokes are of the "Mark Twain" sort, and only moderately...

POISTRY.—Corydalis 3 a. Story of tho Sicilian Expedition. By Edward

M. llstwtroy. (C. Kogan Paul and Co.)—A graceful prologue, written in a flowing verse that reminds one of Mackworth Praed, claims the reader's favourable attention to the drama...

to the reader a great mass of information, carefully collected and, on the whole, well digested. There are, perhaps, one or two things to which exception might be taken. What is...