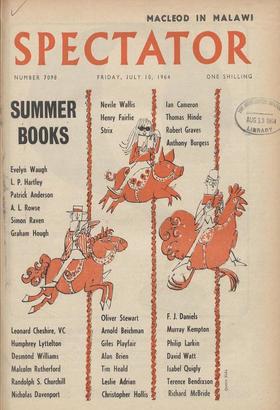 —Portrait of the Week— 'WHAT I LOSE on the frigates

I'll regain on the telly,' seemed Mr. Wilson's philosophy. In the approach to the countdown period to the general election, every whisper is being gauged in public Opinion poll...

C ONSIDER the problem : if Peking were to accept a 'hot line,' who would it be with? It would hardly be Paris, since the French are developing their own perfectly competent way...

ed lY Ji- be of be o- le to at re R EGRETTABLY,. the Government has proV inflexible to the end over what is wide regarded as a serious gap in the Obscene Pub cations Bill. The...

M R. PATRICK GORDON WALKER'S solemn pledge that a Labour Government would not take Britain into the Common Market with- out the issue first being put to the electorate in a...

F ROM being the conference without a purpose, this week's gathering of Commonwealth Prime Ministers has come to look more alive. The feeling that there was nothing much to dis-...

Wilson Week By DAVID WATT Consider, first, the anti-Franco outfit. We shall Presumably never know whether the Spanish Government was in fact impelled to cancel its contract to...

I AM here for two reasons. First, because, as II said in the House of Commons recently on the second reading of the Malawi Independence Bill, for good or ill I have more...

The Law Beyond All Law

From MURRAY KEMPTON NEw VORK T HE most entrancing symbol of the first hours of the Civil Rights law was Eugene Young, thirteen, of Jackson, Mississippi, the first Negro to have...

Breaking the Talk Barrier By OLIVER STEWART N EW British aircraft are too often bedevilled by aviation's inalienable inability to talk straight. Its promises are not kept. Its...

Please Keep Out Presumably the president of the Library Asso-

ciation knew what he was about in the strictures he passed this week on some younger librarians. For these specialists, he indicated, libraries existed as an end in themselves:...

It is a peculiarly humiliating thing to find oneself in ignorance of some subject which is so well known to the rest of the world that no one ever dreams of explaining it....

IF a man made a habit of firing a blank pistol out- side your windows at un- predictable moments it would not be difficult to obtain legal powers to dis- suade him from his per-...

Scoop Topless dresses, it is quite clear, are this year's

Silly Season topic par excellence. It is not the sort of subject on which the Spectator would normally expect to be exceptionally well in- formed: but my colleague Roy Dewar...

Helping Hands Some weeks ago an enterprising young man named

Anthony Steen asked this journal for help. He had created, as he explained, an organisation of young people who regularly gave some of their spare time to befriending and...

The Right Sort of Change?-5

Attitudes and Aspirations By HENRY FAIRL1E T an running title of this series, with its ob- vious ambiguity, underlines the difficulty Which many Conservatives are having...

BY CHRISTOPHER HOLLIS Henceforth in Colleges Wykehamical All sex relations shall be arnica', Freedom will broaden by consent From precedent to precedent. (Oh, God, to see the...

By EVELYN WAUGH T HE death of Alfred Duggan in April of this year brought an abrupt end to a literary career which was in many respects unique. In recent years we have become...

Brian Behan has written a remarkable study of his brother Brendan, who died in March at the age of forty-one. It will be published in the 'Spectator' next week.

My Fire—and My Press

• By GILES PLAYFAIR R EcENTLY, I suffered a minor calamity. I have a five-year-old son and a two-year- old daughter who are both persistent and noisy early risers. My son,...

By ARNOLD BEICHMAN S OME months before the 1960 Democratic national convention, Senator John F. Ken- nedy was in Detroit barnstorming for delegates. As he and some of his...

The Sting in the Tail By L. P. HARTLEY I HAVE had great diffi- culty in remembering what my first paid job was. Several different employ- ments seemed to compete for the...

King's Speech By RANDOLPH S. CHURCHILL STUDENTS of the press will have read with interest the flamboyant address which Mr. Cecil Harmsworth King, chairman of the International...

By TIM HEALD E VER since a group of Cambridge under- graduates, dressed as visiting West African dignitaries, inspected the Home Fleet at Port- land, students have had a...

SIR,—Margaret Roberts is clearly basing her assess- ment of what

THE LIGHT PROGRAMME Sta,—Mr. Frank Gillard says that the readers

will judge whether Quoodle or himself is talking sense. Perhaps rather a foolhardy statement, Mr. Gillard?

SIR,—Admitted that it is hard to see clearly through the smoke-screen put up by the more militant Pro- testants, it is hardly accurate to say that anyone wants to use 'wafers at...

Sia, — In the first paragraph of their article, Richard Hoggart and Stuart Hall rightly say that `to argue that local, commercial radio would be "free" is simply to assert more...

SIR,—I drew the attention of our Vicar to David Watt's

article on 'Holy Warfare.' He considered that the whole legislative exercise being undertaken by MPs, Lords and high Church leaders in both Houses was a waste of time. The...

SIR, —Mr. J. B. Ashe should not be unduly perturbed about the variety of people who are entitled to the appellation 'Doctor.' The medical man who objects should be content to...

S1R, — The more one reads your journal, among others, the more one sees that we are being asked to choose between conservative Socialists and socialist Conservatives. How mush...

am writing a Life of my husband Lewis Namier, and would be grateful for the assistance of readers who have memories or documents likely to be of help to me, particularly for the...

SIR, — Mr. Ashe asks whether it is too late to legis-

late that the honourable title of doctor be confined to the medical profession. But why should a word de- rived from the Latin docere be so confined? If am- biguity is to be...

am collecting material for a study of the lives of the 10,000 refugees, most (but not all) of them Jewish, who came to England as children twenty-five years ago. Would those...

A TASK FOR YOUTH SIR, — With reference to the letter from

Mr. Anthony Steen, I would like, as an individual member of the LCC Welfare Committee, to give my wholehearted support to his effort to rouse the nation's conscience to the...

SIR, — Do we hold the medical man in the highest regard?

If so, who are 'we,' to whom Quoodle, Dr. Gallup and Mr. Ashe refer with such pride? Cert- ainly not myself nor very many of my acquaintances. For more universal opinions we...

SIR,—Mrs. Atherley has a case in point when she suggests

SIR, — Mr. Jeremy Brooks's reviews in your June 5 issue, 'Into the Past,' have such an excellent opening paragraph that I am sorry to criticise a later one. I did not know that...

THE COST OF SMOKING

SIR,—The Prime Minister, in a letter to our society, states: 'The fact that smoking, especially the smoking of cigarettes, is a cause of many serious illnesses has been...

You might be unable to buy the Spectator when you go on holiday, as newsagents do not carry surplus stock. To make sure of receiving your Spectator send us your holiday address...

The Hard Night Out

By IAN CAMERON Q.89: Taking it all round, did you think your last visit to the cinema was: Very good value for money 'Good value Not particularly good value/Poor value? This...

The Last of the Festivals?

By HUMPHREY LYTTELTON IT was definitely the morning after the night before. By 10 a.m. on Saturday, June 27, two lorry-loads of broken glass had already been removed from the...

IT is easy to get excited by the motels that are beginning to spring up all over Britain. What a relief to find neat bath- rooms, proper bedside reading lights and floor boards...

A Hard Day's Night. (London Pavilion, 'LP certificate.) WHEN everything's been said it's time to keep quiet, as the Chinese proverb says, or if it doesn't it should; which is...

Parson's Pleasure By PATRICK ANDERSON W HAT really was the emotional life of the Victorians? What were they really up to sexually? And, in particular, how pervasive and...

MI I Tell You from My Heart

I begged my love to wait a bit Although the sky was clear: 'I smell a shower of rain,' said I, 'And you'll be caught, I fear.' 'You want to keep me trapped,' she said, 'And hold...

IT is the most familiar areas of poetry that are the hardest to anthologise. A collection of nine- teenth-century English verse cannot in the nature of things aim at...

I HAVE always imagined that Whitney Balliett, jazz critic of the New Yorker, evolved his style after a careful study of the manner of his erst- while colleague, the late A. J....

The Hero and the Villain

By LEONARD CHESHIRE T HIS is unquestionably an illuminating book* —illuminating not so much about the man of whom it is written, but of the society in which We live. The truth...

Much Ado About Nothing

The Penguin Book of Japanese Verse. Translated with an introduction by Geoffrey Bownas and Anthony Thwaite. (Penguin Books, 7s. 6d.) THIS new collection of Japanese verse in...

Days are sun Joyful alarm Shining our ears And eyes To see solemn dark Slanting off slide Of magic light. Days are all, Plentiful poverty, Rich-making To pocket its...

By DESMOND WILLIAMS G RoFATZ (grOsster Feldmarshall aller Zeiten) was, in its full version, a description Hitler fully accepted from his admiring entourage. For...

We Call this Friday Good

The Morning Watch. By James Agee. (Peter Owen, 16s.) WE are seldom taken for what we want to be taken for. In life, James Agee settled into being a big film-man, and that...

The Daemon of Bacon

By NEVILE WALLIS Incongruous as the two figures are, the painter Francis Bacon poses his own riddle of a brilliant imaginative flame leaping out of an impenetrable darkness...

A Coming Attack on the Pound? DAVENPORT By NICHOLAS A month or so ago I was congratulating Mr. Maudling on not listening to the economic soothsayers and the monetary magicians...

By CUSTOS T firm while a fearful rot takes hold of the tiE fact that the equity markets can hold Shares of ROLLS RAZOR and ENGLISH AND OVER- SEAS INVESTMENT—HOW a fifth of...

By LOTHBURY THERE is excellent news for shareholders of I Stewart and Ardern, the - large distributors for BMC vehicles in and around London. Their dividend (with a final...

Travelling Hopefully By LESLIE ADRIAN Modern travellers, often limited in the amount of luggage they may take, need to be more selec- tive. They could do worse than follow the...

By ALAN BRIEN So far as I can discover, my college at Oxford, in all the years since its Eliza- bethan foundation, has produced only two really distinguished men -- Law- rence...

Room at the Bottom By STRIX hope to contribute to them once a fortnight on topics of marginal importance, or of none. 'Years ago, on some desolate and shark- 'infested...