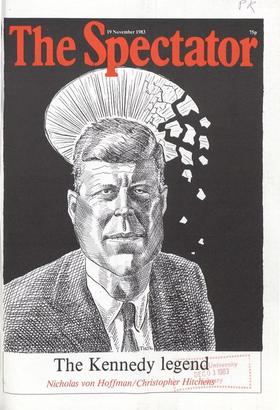 T he Provisional IRA has often found it difficult to win enough support, not because it resorts to violence — that has always made it glamorous to the outside world, and has...

Our own resources Charles Moore I f you suffer from persecution mania, you will imagine that there is a conspiracy of silence among politicians on the subject of the Common...

A very good joke by Princess Elizabeth of Toro. Last month I wrote something in the Spectator suggesting that she ought not to have sought damages from the British press for...

One hundred years ago The difficulties of the historian are

well illustrated in the discussion in the Times on turtle soup. Sir Henry Thomp- son, who is an eminent authority on food and cooking, as well as surgery, writes to say that...

Shiva Naipaul long Independence Avenue, Victoria's i — vmain thoroughfare, one sees the developing modern profile of the Seychelles capital. Here you will find a couple of...

Will Syria finish the job?

Charles Glass Tripoli E smat al Muqaddam's grocery is doing a .1—.Ibrisk business these days. The rest of Tripoli is closed for the duration, but Esmat sells hundreds of...

Nicholas von Hoffman Washington T he American imagination is crowding in on American reality. The former Secretary of State and United States Senator, Edmund Muskie, will...

Christopher Hitchens Washington L ike every one else of my generation, I can remember exactly where I was standing and what I was doing on the day that President John...

Harry Eyres Barcelona A Fiesta for Peace and Disarmament .organised by the Catalan Communist Party (PCC): one might have expected a grim and dreary occasion, badly amplified...

Richard West Weston-super-Mare T f 1832 was 'the Year of Birmingham' I that city led the campaign for the Reform Bill, then 1983 deserves to be called 'the Year of...

John Casey sonne You are a widowe, rich and now childlesse, and there be in both universities so many pore towarde youthes that lack exhibition, for whom if you would found...

Suitors for the savers Jock Bruce-Gardyne I tmay be that the Daily Mirror does not currently count a very high proportion of building society general managers among its...

Epistolary dons Paul Johnson A s a careful student of Letters to the Editor, 1 have become increasingly aware of a growing and reprehensible tendency of readers to write not...

Sir: I suspect that Hugh Burnett may be un- justified in his criticism of Paul Johnson (Letters, 12 November). Many Biblical critics would argue that the conversations contained...

Sir: Discussing the 'Best Novels of Our Time' business, Paul

Johnson ('Literary sil- ly season', 12 November) asks rhetorically, 'Who but Miss Howard would have selected Elizabeth Taylor's little-known Angel?' Well I would, for one. The...

Best novels? Sir: The story behind the Observer's story on the Book Marketing Council's 'Best Novels of our Time' stunt is even sillier than Mr Paul Johnson (12 November)...

Sir: We refer to the latter part of the article

by Richard West entitled 'The Bridport dagger' in your issue of 1 October. In a series of unsubstantiated comments based mainly on hearsay Richard West manages to malign all...

Sir: A scurrilous article recently appeared in your paper entitled 'The Bridport dagger' (1 October) under the name of a Richard West. 1 am suprised that the Spectator has sunk...

Sir: Count Nikolai Tolstoy deceives himself. He has not written 'a low-key and in part ironical approach' to Tolstoy's flight. He does not possess the literary resource. His...

Runcie's contribution Colin Welch G rave misdemeanours have been alleged against Archbishop Runcie. Last week in the Spectator, for instance, A. N. Wilson charged him with...

Mark Amory Married to a Single Life: An Autobiography, 1901-38 Wilfrid Blunt (Michael Russell £9.95) Brothers and Friends: An Intimate Portrait of C.S. Lewis The Diaries of...

Anthony Blond The English Rothschilds Richard Davis (Collins £12.95) P rofessor Davis will not be the last chronicler of this amazing tribe but he is the first to be given...

Patrick Skene Catling London Tales edited by Julian Evans (Hamish Hamilton £8.95) F or people who have never been in London (there must be such people) this vividly...

John Michell The Stars and the Stones Martin Brennan (Thames & Hudson £12) M artin Brennan is a New York artist who studied Shintoism in Japan and was advised by his teachers...

Raoul revealed John McEwen T he programme is advertised round the battlements of the Hayward as 'Dufy/ Hockney', but in quality and size Hockney's contribution is actually of...

Giving voice Maureen Owen \V inter is the time for pondering meaty issues on the wireless, and lectures and subsequent discussions about the lec- tures are highly suitable to...

In-crowds Taki New York I is that time of year a g ain. What Saki called the period between the cruelty of summer and the harshness of winter. Well, I'm afraid Taki isn't as...

Meddlesome Richard Ingrams T here was some irony in the fact that the BBC should broadcast a two-part play about its founder John Reith just at the time when it is under...

Poets Amalgamated P.J. Kavanagh A l this summer the 45-year-old poet Frances Horovitz lay seriously ill. She was unable to work and so was her hus- band, Roger Garfitt, who...

Grants and groans Jeffrey Bernard T here seems to be a crazy idea going around that journalism is actually im- portant. What nonsense. How awful that Harry Evans, ex-editor of...

Jaspistos reports: Competitors were asked for a set of rules for a Groucho Club to be founded in London. `So you want to see the rules, Mrs Ritten- house? Ah, what an evening...

No. 1296: Truepenny? Set by Jaspistos: How glad, really, was Penelope when Odysseus/Ulysses returned? An untraditional poem please (maximum 16 lines) such as she might have...

Spectator Wine Club Auberon Waugh F or the last offer of the year we are back to my old particular stamping ground of fine and expensive old burgundies, this time raiding the...

Capital city Raymond Keene A few years ago, while compiling a book of chess brilliancies, I discovered that from the 1850s to the 1880s a majority of the truly outstanding...

A prize of ten pounds will be awarded for the first correct solution opened on 5 December. Entries to: Crossword 634, The Spectator, 56 Doughty Street, London WC1N 2LL. The...

T he first of the American nuclear cruise missiles arrived at Greenham Common air base 24 hours earlier than expected by the women protesters camped outside the gates. Defence...

with Dame Edna Everage Hello Possums! Although I'm as Left as they come, I've always had a soft spot for that marvellous old Maverick from the Orkney Isles — cuddly, tweedy,...

I. Dame Edna Everage will introduce one question by a different person in each issue of The Spectator from now until the 10 December issue. 2. Do not send in your replies each...