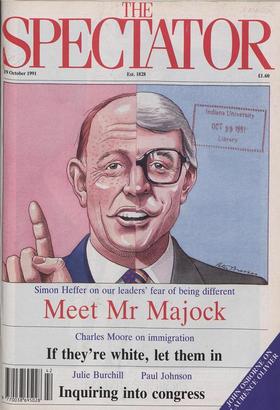 A short history of British armaments. T he Prime Minister, Mr John Major, vehemently denied Labour claims that he would privatise the Health Service, prom- ising that it would...

D eep down, I'm pretty shallow, and like all shallow people I love attention. I believe that anything worth doing is worth doing in public. And it's very addictive, attention; I...

THE BEST OF FRENEMIES

Simon Heifer believes the differences between Labour and the Tories are much fewer than they pretend THE PARTY conference season is a ritual of abuse and counter-abuse,...

POOR, HONEST AND OUT OF A JOB

persist . . . LAST WEEK I was consulted by a patient who, almost immediately on en- tering my room, asked whether I was interested in the recent case of an Amer- ican serial...

THE real question at issue in the "great jewel case" in India, is whether the Nizam of Hyderabad bought a diamond from Mr. Jacobs, of Simla, on approval, and sent it back...

WAITING FOR A WAR

Noel Malcolm surveys the next Balkan battle ground Sarajevo AN AMNESIAC, finding himself on a street-corner in Sarajevo and trying to guess where he was, would be quite unable...

DOWN ON THE MONEY FARM

Boris Johnson explains how reform of the Common Agricultural Policy is stymied Brussels FOR ONCE, the Northamptonshire barley baron looked a little anxious, even a bit rattled....

FOUL STANDS THE WIND FROM FRANCE

John Laughland on the deep malaise affecting the country's political life Paris MY NEXT-door neighbour is a fascist. A scrawny little man with specs, a military- style jerkin...

THE WORST OF ALL POSSIBLE WORLDS

Charles Glass on the Iraqis' sufferings under Saddam's reign of terror and the West's economic blockade Baghdad THE story thus far: At the end of February, the allies forced...

THE BRAVEST OF US ALL

Tom Pocock recalls the nerve of his colleague, Clare Hollingworth IT'S ODD to think that Clare Holling- worth turned 80 last week. She is for ever briskly middle-aged in the...

The liberal fascists ride high PAUL JOHNSON N ow that Marxism is dead, people often ask: what new ideological horror will take its place and bring misery to the world? My...

IT SHOULD have been an historic moment and perhaps, after all, it will be. The Soviet knock on the IMF's door means, or should mean, that the world at last has one international...

JUMPING up and down to attract atten- tion, and lobbying away like old IMF hands, here are two new delegations — from Oxfam and Christian Aid. They are behind the World...

IT SHOULD end, said Nigel Lawson, not with a Bangkok but a whimper. He meant the custom which, one year in three, makes the IMF and World Bank move out of Washington. Their...

Grigory Yavlinski asks the IMF to shore up the rubble CHRISTOPHER FILDES he Soviet economy, said Grigory Yavlinski, is built upon rubble. His audi- ence — the finance...

Sir: I am afraid I have to disappoint Nell Dunn (Letters, 12 October). If I found myself in dire economic straits, I certainly would not turn to prostitution. Having recently...

Sir: Although I quite enjoyed the article 'Shotgun marriages' (28 September), I do find myself becoming increasingly irritated that any piece of writing even remotely con-...

Sir: I am delighted that Miss Julie Burchill has decided to champion the Jews; but wonder whether this is compatible with her professed admiration for Stalin and Marx. One of...

Sir: If Taki is not an anti-Semite, why does he

Fertile brains Sir: As a professional woman nearing menopause I was bemused by Julie Burchill's tirade on Germaine Greer's The Change (Diary, 5 October). Having found Miss...

Sir: The whole point of The Spectator is to provide a platform for its contributors to put forward an original line of argument. Provided that each piece is reasonably well...

N ow the platinum age of the social X- ray is over, New York is no longer the proper subject of New Yorkers. The only thing they'll be talking about these days is how to get out...

I would go to Manhattan for its restau- rants alone. Scoff you may, but then an enormous and unwarranted superiority attends our attitude to eating American style. Though scoff...

Mr and Mrs William Hibbert received the following letter: Dear Mr & Mrs Hibbert, As you may already know, we have done extensive work throughout the world relating to people...

Message to a mad deus

Puritanical glimpse of a sensationalist

Andro Linklater THE KING OF INVENTORS: A LIFE OF WILKIE COLLINS by Catherine Peters Secker & Warburg £20, pp. 498 I n the great canon of English literature, Augustus Egg is not...

How unlike the home life of Cleopatra

Ruth Guilding VICTORIA AND ALBERT: LIFE AT OSBORNE by HRH The Duchess of York, with Benita Stoney Weidenfeld, £18.99, pp. 208 My fascination with Queen Victoria, both as a...

Maintaining dichotomies rather than a motorcycle

David Papineau LILA: AN ENQUIRY INTO MORALS by Robert M. Pirsig Bantam Press, £14.99, pp. 418 I n his semi-autobiographical Zen and the Art of Motorcycle Maintainance, one of...

John Biffen STAYING POWER by Peter Walker Bloomsbury, £16.99, pp. 248 I t is commonplace to observe that the Conservative Party is a broad church. It has long been so, and...

If, once established, you're confronted by Youth, big ideas, reformist zeal — old hat, Old hat — and can't dodge past the hungry eye Starved of encouragement, remember that When...

Pacing upon the mountains overhead

Patrick Marnham THREE LETTERS FROM THE ANDES by Patrick Leigh Fermor John Murray, £10.95, pp.118 h is is not so much a book as, well, three letters from thc Andes, originally...

Out, I say John Osborne LAURENCE OLIVIER by Donald Spoto Harper Collins, 178, pp.387 I t is my own irrational opinion that if you don't believe in God, you shouldn't waste the...

Irrecoverably dark, without all hope of day

Hilary Mantel JUMP AND OTHER STORIES by Nadine Gordimer Bloomsbury, £13.99, pp.257 N ow that Nadine Gordimer has been awarded a Nobel Prize, it will be harder than ever to...

Sumo The gentlest art H ad she been around last week, Queen Victoria would not have been amused. Her darling Albert's Hall was invaded by lots of fatties wearing very little...

A holy muddle Peter Phillips J ust occasionally I go to church: I did so last Sunday. I went in a spirit of curiosity, interested to find out what has happened most recently...

The Revengers' Comedies (Strand) The evil underneath Christopher Edwards an Ayckbourn's latest work — which balances comedy with a sense of queasy menace — comes in two...

Chocs away! Ursula Buchan It is not possible, of course, even in these strange climatic times, to cultivate one's own cocoa trees outdoors in the East Mid- lands, but one can...

Not such a good idea Martyn Harris E ery so often, in a fallow patch at a TV company, the cry goes up that what we need are some really good new ideas. So conferences are...

In praise of pigeons Zenga Longmore A I was on my way to the park last Sunday with Omalara, she ran very quickly down the road in the opposite direction. Having reached the...

Stuck with a stick Jeffrey Bernard I have been sitting in the Groucho Club waiting for somebody that I could dictate this column to, since I still cannot use the typewriter....

White elephant Raymond Keene he first world cup tournament finished earlier this week in Reykjavik, and the full crosstable is to be found below. The result was a vindication...

COMPETITION 12 YEAR OLD SCOTCH WHISKY Tomorrow's type Jaspistos I n Competition No. 1698 you were asked to imagine you are a social historian of the next century and to...

You are invited to supply a popular song lyric (period 1890 to the present day) in which one of these two phrases of Dickens occurs or recurs: 'Let's have a wedding!', 'Don't...

NOW THE mostly one-sided preliminary matches are over, rugby union's World Cup gets down to the nitty gritty — and the whole thing, as sure as eggs, will be decided over the...

Q. How can I tell for certain whether or not someone fancies me? I have been 'going out' for a few weeks with a girl who does seem to enjoy my company but I can- not quite...