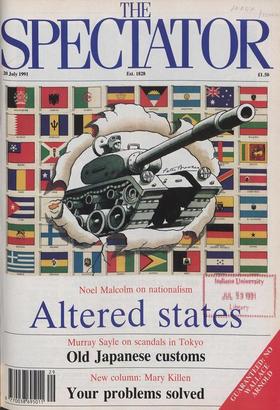 T erry Fields, a Labour MP and Militant sympathiser, was jailed for 60 days for refusing to pay his poll tax. The Labour Party began moves to deselect him from his seat,...

N ow that South Africa has been given a cleanish bill of health, I wonder if letting bygones be bygones is a two-way arrange- ment and they will let me back in? I have visited...

The problem of having nothing to worry about AUBERON WAUGH Woodstock, Vermont. obody ever told me how beautiful New England is, or, if they did, I was not listening. Suddenly,...

IN DEFENCE OF NATIONALISM

ignore an unfashionable doctrine at our peril Whilst national narrow-mindedness is every- where repulsive, it becomes actually loath- some in Germany, for there it is coupled...

AN ODD MARRIAGE OF EAST AND WEST

Murray Sayle dredges the latest Japanese scandal for signs of hidden meaning Tokyo SHOULD you ever be asked to a Japanese wedding, go. You will be entertained, possibly...

WHAT BCCI COULD TEACH BARCLAYS

Michael Lewis detects irrational forces at work in the British economy WHEN I worked for Salomon Brothers between 1985 and 1988 I traded regularly with BCCI, which last week...

Dictator of the month: John Simpson on Kim Il Sung, ruler of North Korea One day, perhaps, there will be an autocra- cy theme-park, where visitors will be able to wander...

WE SEE with the utmost satisfaction that the Guildford Grand Jury have thrown out the bill against Mr. C. A. Fyffe, who was charged with acts of indecency of which all his...

AS I WAS walking through the prison's delightful kitchen garden the other day °n my way to the prison hospital, I thought how therapeutic it must be for armed robbers to...

enthusiasm for common sense in schools is not shared by his government PARENTS, declared Mr John Major this week, need to be given more power. This is now a recurrent theme of...

THE TROUBLE WITH PILGER

The media: Priul Johnson examines the latest exposure of pilgerism JOURNALISTIC awards do more harm than good. In the first place there are far too many of them and the...

The Bank of England, the Bank of Cocaine, and the box marked 'No publicity' CHRISTOPHER FILDES S hock exclusive: there are more than 500 banks licensed by the Bank of Eng-...

THE good news from the economic sum- mit is that the world's leaders forecast growth and agreed on anti-inflationary policies. The bad news is that they said the same thing last...

YOU would think (but I don't) that ministers might learn. Amid loud cheers, they propose to jam their thumbs into the machinery of the housing market. Previous scars,...

Water on the brain

WELL, old chap, how shall we advertise Telecom? With the Piping Poof? No, no, we're trying to sell shares, you remember. The Government's unloading another £10 billion worth...

THE daftest contribution to the BCCI affair comes (but you guessed it) from the Confederation of British Industry. It wor- ries about the banking scene — but not about a major...

Sir: According to 'The royal confidants' (13 July), I had lunch with Prince Michael of Kent in the Royal Garden Hotel during which he gave me information concerning the Prince...

Sir: In his interview John Mortimer was having fun with

me — which is perhaps not the best way to find out what a man believes. I must take exception to one remark which he attributes to me — 'if he [a mythical Hindu] knew nothing...

Sir: Before making the ridiculous sugges- tion as you did in your leader of 6 July (`The Jury is an ass') that a property qualification and literacy test be applied to...

Sir: Thelma Stuart wants to know (Letters, 13 July) why most bras are back-fastening. The answer, perversely, is that men design them. Although difficult it's not impossible to...

Sir: No wonder Monsignor Gilbey smiled calmly and .patiently during most of his interview with John Mortimer (`The Mon- signor at ninety', 6 July). A priest in his 90th year is...

Sir: You cannot imagine my thrill of delight at being described as a 'British passport-holder of mixed Mediterranean origins' by Mr Courtauld (`Brighter Rock', 13 July). Alas,...

An unsuccessful likeness James Buchan J ulian Barnes's new novel, Talking It Over, is so like Martin Amis's Success that I couldn't at first believe what I was reading. I...

The desert and the sown

The one that got away

Alan Judd JOSEPH CONRAD: A BIOGRAPHY by Jeffrey Meyers John Murray, £20, pp. 428 I f Jeffrey Meyers were a ship he would be a Russian trawler, bristling with anten- nae, nets...

for Edward You looked at me with such unjustified trust — In this case that I'd got a joke - That I felt, in the street, my throat choke. Then a woman gazed at you with such...

Francis King PATRICK WHITE: A LIFE T he English obituaries of Patrick White were far more perfunctory than those of Graham Greene. But, although Greene's books had an...

Fame was the spur

Ranjit Bolt BEING DIVINE: A BIOGRAPHY OF SARAH BERNHARDT by Ruth Brandon Secker, f17.99, pp.466 She has in a supreme degree what the French call the 'genie de la reclame' — the...

God and the atom

The long and the short of it

Christopher Bray WAINWRIGHT IN THE LIMESTONE DALES by Alfred Wainwright, with photographs by Ed Geldard Michael Joseph, £16.99, pp. 192 A lfred Wainwright died in January and...

Generous to a fault

William Joll DANCE TILL THE STARS COME DOWN: A BIOGRAPHY OF JOHN MINTON by Frances Spalding John Curtis! Hodder & Stoughton, £25, pp.271 O f the generation of artists in...

Sale-rooms A house divided T he auctioneer's hammer was already high in the air and about to come down on an Impressionist lot with resounding finali- ty when a man by the...

Alice (`12', Odeon Haymarket) Manhattan magic Harriet Waugh W oody Allen's films are about how to be a good person in a corrupt and material- istic world. His window is that...

Hallowed halls Peter Phillips T he advice of the Pope to his bishops a few years ago not to allow the staging of public concerts in their churches was the latest in a long...

Beyond Gerontius David Mellor expresses his admiration for Elgar's lesser- known choral works he first night of the Proms used not to have any special significance. The season...

Lush places Ursula Buchan O ur garden is set behind a village street and is of only medium size. Never- theless, through no virtue of our own (except perhaps the negative one...

Love in a hot climate Taki Washington DC If you think it gets hot in Hades, you should try the nation's capital around this time of year. It's so hot that the protester who's...

Out to lunch Martyn Harris o it was the modest Sue Lawrence with her noisettes of lamb who took the Alas- terchef award finally, and quite right too. The two other competing...

Fair exchange Zenga Longmore F urious at being landed with a sick, moulting rug which had been passed off as a healthy specimen by a doorstep salesman, I rolled the offending...

Halfway there Jeffrey Bernard L egal complications are preventing me from moving into the new flat in Soho. I am staying in what could be called the Hotel Limbo. I don't quite...

About five years ago, I predicted that, strange though it might seem to persons of taste and discernment, Spanish food was the next and coming thing; fashionable mouths would he...

Maecenas Raymond Keene H adji Mohammad Hasan, long a key figure in both Fide and Indonesian chess, died on 1 April in Jakarta. Famous as a devoted patron of the game, Hasan...

COMPETITION egaVAS Res t V 12 YEAR OLD SCOTCH WHISKY Angling for small fry Jaspistos I n Competition No. 1685 you were in- vited to provide an extract from a brochure from...

You are invited to write a poem (maximum 16 lines) in the manner of either Housman or Hardy on the retirement of a well- known sportsman or sportswoman who 'hung up their boots'...

Caddies come to the fore Frank Keating WIMPS held in lowest esteem of all by Wodehouse were 'slugs, poets, and caddies who hiccupped'. Not any more the last. Caddies are...

Q. How does one best find out if someone has a Swiss bank account or not? I am owed a considerable amount of money by someone against whom I have had a judgment, but he is...