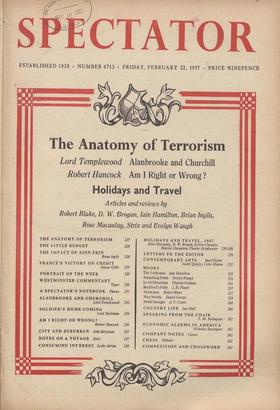 THE ANATOMY OF TERRORISM

T HE Government's two apologias on Cyprus, in the - United Nations and in the Commons, have done nothing either to justify its past policy or to suggest that there will be any...

MR. SHRPILOV has been relieved of his post as Foreign Minister of the Soviet Union after only eight months. — The Times, February 16, p. 6. MR. SHE.P11.0V has been Foreign...

T HE 'little Budget' which Mr. Thorneycfoft introduced in the House of Commons on Tuesday shows that the new Chancellor is already thinking along the right lines. He is...

The Impact of Sinn Fein

By BRIAN INGLIS A rumour was circulating in Dublin recently that when the police arrived to arrest one of the Irish Republican Army leaders, a few weeks ago, they found him...

IF the parties to the Middle East dispute hold their breath much longer someone is either going to collapse with suffoca- tion or be knocked over by a sudden exhalation. Chief...

By DARSIE GILLIE I T is to be hoped that the French newspaper reader is feeling a little puzzled by the corn- ' ments of his public men on the outcome of the Algerian debate in...

THE DUKE OF EDINBURGH . . . arrived five minut late.—Sunday Express. THE DUKE was nearly late.—Empire News. THE TIMING was perfect.—Sunday Dispatch. HE FINISHED up by being...

THE Tories have taken to jeer- ing when the United Nations is mentioned. This, rather than the Rent Bill concessions or the arrival of the Con- queror of Lewisham, is the most...

'I DO NOT KNOW,' said Mr. Gresham Cooke the other

day, according to Hansard, 'whether my hon. Friend is aware that the other day a branch of the Amalgamated Engineering Union had a secret ballet, and only seven per cent. of the...

I WENT TO the first night of The Crystal Heart,

and was torn between sympathy for the audience, who were much more amusing than the cast, and sympathy for Miss Gladys Cooper. If ever a play deserved the bird this one did, but...

1 Shepilov is needed to direct propaganda, the need s

BUT SOME questions do arise. All but the most militaristically

minded Conservatives must see the advantage of some toleration of dissent within the party; after all the present Prime Minister—like his two predecessors—was once a prominent...

AS A TOWNSMAN, I am diffident about venturing an opinion

on agricultural matters; but surely the latest PEP pamphlet, Agriculture and Land- use, is wrong when it argues that the trouble with English farms is that they are too small?...

RELIGIOUS CONTROVERSY, Mr. Evelyn Waugh re- cently reminded us, has

its difficulties and demands a certain knowledge of the subject. Writing in the current number of Encounter, Mr. Angus Wilson seems to be oblivious of both the hazards and the...

I SEE THAT Mr. John Gordon, too, has been crowing

because twenty-five books published in the English language in France have been banned by the French Ministry of the Interior; and as one of them was recommended to the...

I HAVE NOT read the works of M. Jean Genet,

and for all I know they might give me the same nausea as they gave the Chairman of the Birmingham Public Library Committee; but I do not feel that the Government ought to...

THE SHEPILOV reshuffle is just the sort of minor and

obscure development on which K remlinolo- gists most delight to exercise their mutually con- tradictory ingenuity. Shepilov was transferred from the Party Secretariat to be...

A Study in Contrast By LORD TEMPLEWOOD C IR ARTHUR BRYANT is a past master at dealing °with famous diaries. He knows what to select from them, he knows also how to fill in the...

Is this then the end of the story? Is the brave tale told so soon That we swore to write together In love's first flaming June? And is this grey December The end of that holy...

Am I Right or Wrong? By ROBER T HANCOCK I N Britain this is the age of the modest millionaires. Not for them are the £50,000 one- night parties thrown by the oil oligarchs of...

Notes on a Voyage

By STRIX Somewhere in Canada A PPLE-CHEEKED was the word to describe the taxi-driver. Elderly, courteous, and when it came to suitcases herculean, he seemed to belong to the...

By JOHN BETJEMAN AM amazed by the change that has occurred I in the stocks of second-hand bookshops. Any handsome, leather-bound book of the eighteenth century, however...

HUXLEY once defined the 'practical man' as One who repeated the errors of his forefathers.—Page 86 of The First Ten Years (National Coal Board publica- tion). DISRAELI defined...

By LESLIE ADRIAN 'THERE are two of life's pleasures which ought to be complementary : an evening at the theatre and a good dinner. They are rarely com- plementary in London...

IN SPAIN AND PORTUGAL Rose Macaulay IN ITALY ... Kellow

Chesney IN FRANCE ... D. W. Brogan WHERE ARE YOU GOING? HaroldChampion NO ROBBERY ... Phoebe Drinkwater In Spain and Portugal By ROSE MACAULAY markets. The Counter-Reformation...

By D. W. BROGAN 'GOOD Americans when they die go to Paris.' It is nearly a century since The Autocrat of the Breakfast Table launched the famous and perfect jest of Tom Appleton...

one can't see across the golf course, Fairy Wish- fulfilment keeps planting me down in Fiesole. It is, of course, hot weather and still early because as I turn and begin to...

Where are you going to?

By HAROLD CHAMPION W ITH dark warnings of economic depression well in mind one may well ask whether a holiday abroad can really be afforded this time. It's the same old...

By PHOEBE DRINKWATER ou would expect an advertisement in the I London Times, offering a two months' lease of a villa in Positano in exchange for a London flat, to attract...

`More Technologists—But Where From ?' Stanley Mayne The Shoos Bill Prof Michael Oakeshatt Out o' the East and the Way Back George P. Bradney, George Edinger Christian:ty and...

SIR,—Mr. Walker clearly never read my article that he deplores

or he would not write that I never men- tioned Malays or ask if I met a good District Officer in a Kampong. Really, a former deputy director of education should know that the...

SIR,—It would be unfortunate if the enormity of the provisions

of the Shops Bill at present before the House of Lords, and the disingenuouiness of the defence so far offered for them, were to stand in the way of a reform of the law which at...

'Christianity and Race,' in your issue of February 15, your reviewer states amongst other things, 'This teaching of Jesus on race relationships was so revolutionary that it...

OUT OF THE EAST AND THE WAY BACK

SIR,—Mr. Walker's letter in your last issue recalls an incident which occurred towards the close of my service in Malaya which you may think of sufficient interest to deserve...

SIR,—II is proposed to form a Society of Indexers, and

the project has the full approval of the Pub- lishers' Association. Its aims would include the following : (1) to im- prove the standard of book indexing and secure some...

SIR,—Mr. Robert Blake's and Mr. J. W. Brown's suggestions are too. complicated. The simple and most satisfactory solution would seem to be the incorpora- tion of Oxford...

SIR,-1 am just as bewildered by Mr. Daniel George's letter as he claims to have been by that bit in my review. What does he really want to know? Or is he lust asking an...

SIR,—We were surprised, not to say a little amused, at the indignant complaint you published last week from a Mr. Wood. It is clear. to us that his pride has been deeply...

TAPER AND THE WELSH

SIR,—Taper is right in thinking that the annual debate on Welsh affairs is a farce, and that the rhetoric is as laughable as the wit is not. But he is less than usually wide...

SIR,—Taper may well be right in criticising the use made

by some Welsh MPs of the periods set apart in the Commons for the discussion of Welsh affairs. Their speeches on these occasions too often seem merely plaintive, unconstructive...

SIR,—It is a pity that the continued existence of Wales,

her geography', her language and her per- sonal names are so painful to your Westminster Com- mentator as to cause him to express the hope that, when a Cabinet Minister uses...

SIR,—Pharos's American friend has reason to be dismayed at the 'lack of knowledge even educated people in this country display in matters concerning American culture.' The 130...

• FEBRUARY 25, 1832 AT the village of Lavendon, Bucks, on Wed- nesday week, some females, with a view to the performance of a supposed love-charm, pro- cured a cat, and...

WHATEVER the merits and weak- nesses of Walton's opera Troilus and Cressida, its success seems to have done him good. After a gap of nearly' twenty years, he has found the...

The Little-ease BY LAIN HAMILTON P rHERE are two books here from which the 1 rank smell of doom unmistakably rises. Both are from the French, both by cartographers of hell....

The Comforters. By Muriel Spark. (Macmillan, 13s. 6d.) THIS is a complicated, subtle and, to me at least, an intensely interesting first novel. I do not think that it is totally...

IF you are travelling in England Ashley Courtenay's guide to some 700 British hotels, Let's Halt Awhile (Collins; 9s. 6d.), is, if used with caution, a useful addition to the...

If the cold snap comes one can meet the threat of a setback by sowing onions and brussels sprouts in frames. It is possible to encourage germination by covering the seed boxes...

If there ever was a sulking sort of a bird it surely is the sparrow-hawk in winter. His prey may be enfeebled by cold and lack of food, but the oppor- tunities of coming upon it...

BY IAN NIALL Eviormtv the lady who wrote to me expressing horror at the country habit of destroying a brood of crows has never seen a feeble Iamb that has had its eyes pecked...

When the bends are taken out of the roads, as they have been to a much greater extent these few years past, the milestones are resited and, presumably, X becomes nearer Y to the...

LIFE ASSURANCE AND PENSIONS : TAKING STOCK OVER the past quarter of a century British life offices have played a big part in extending pension provision of various kinds and in...

By NICHOLAS DAYENPORT Is America talking itself into a slump? Almost anything can happen in that extraordinary country and it would be very serious for us if the deflationists...

By CUSTOS THE stock markets still lack a posi- tive lead. The gilt-edged boom has .,/\ been temporarily halted by the funding issue and the rather ridicu- lous rise—however...

SPECTATOR COMPETITION No. 364 Report by Naso A prize of six guineas was offered for a Hans Breitniann version of all or part of one of. the following stories : La Belle Dame...

On a large building site in London the con- tractors

have provided a 'Public Observation Platform' to enable passers-by to watch the excavations. The usual prize of six guineas is offered for up to sixteen lines of verse giving a...