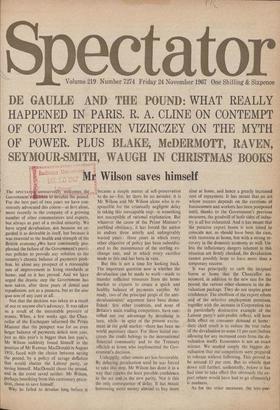 of payments prob. made to this end has been in vain. qua non of any cure at all. ready, two of the principal props of the anti- of our or anyone else's advocacy. It was taken...

With the pound reduced to the new level of two dollars forty cents, our proud nation had broken out of its straitjacket: so Mr Wilson explained on Sunday. In April Mr Callaghan...

Down the slide and boomps-a-daisy

POLITICAL COMMENTARY. ' AUBERON WAUGH All this week the noise in Westminster has been deepening: a sinister, throbbing sound, such is one would expect to hear from a squadron...

What really happened in Paris

MARC ULLMANN Paris—M Couve de Murville and General de Gaulle should by rights be feeling like Cassandra after the roof fell in. But they are not. For months they have been...

The most devalued currency of all

The Prime Minister's devaluation broadcast to the nation on Sunday evening attempted to ex- plain a complex situation in simple terms. In case some who saw or heard it were not...

THE PRESS DONALD McLACHLAN Prodigies of editing, sub-editing, leader-writing, proof-reading and replating of pages were per- formed on Saturday night in the Sunday news- paper...

AMERICA FERDINAND MOUNT New York—During a recent coast-to-coast odyssey, I idly ventured the proposition that Lyndon Johnson is the most unpopular Presi- dent of modern times....

'NO DEVALUATION!' (Front-page headline, Daily,_ Express, 16 November.) `Mr Lawson suggests that there are only two ways out of the present crisis—deflation plus sharply...

GREECE MICHAEL LLEWELLYN-SMITII This is the second of two articles on Greece under the colonels. The first appeared last week. Athens—If Greece's military regime confined its...

worst sign of the outbreak of race-hatred which we have always feared, is the Birmingham procession of triumph over the approaching executions [of three Fenians for the murder...

J. W. M. THOMPSON The trouble is that governments can't just de- value money and let the process stop there: not, that is, if they go about it in the messy way we have been...

If throughout his reign Napoleon ...

PERSONAL COLUMN STEPHEN VIZINCZEY Mary McCarthy's masterpiece on the Vietnam mystery describes a fascinating psychological phenomenon of disassociation. 'The Ameri- can,' she...

CONSUMING INTEREST LESLIE ADRIAN Two centuries ago Parson Woodforde, enter- taining some friends to dinner, gave- them a couple of courses and a dessert. The first course was...

THE LAW R. A. CLINE The application to commit the editor of the Sunday Times for contempt has reminded jour- nalists of the need to familiarise themselves with the law of...

TABLE TALK DENIS BROGAN The tactics of the Government last Friday in diverting the anxieties of Members of Parlia- ment from the state of the. pound to the iniqui- ties of the...

My goodness, my Chips! CHRISTMAS BOOKS

ROBERT BLAKE *Chips' Channon (whose nickname is said by some to derive from his having shared a bache- lor house with one Fish) was a striking instance of that well-known...

MARTIN SEYMOUR-SMITH In 1947 Mr Harold Owen wrote to The Times Literary Supplement stating that information about his brother could not be granted to any- one. However, in 1963...

SIMON RAVEN Michael Hastings's aim, as early declared in this book, is to clear away the myth, adora- tion and hostility which falsify the memory of Rupert Brooke, and then to...

GILES PLAYFAIR Five years ago, Mr Michael Wolff was invited by the then editor of the Sunday Telegraph to make an intensive study of the penal system in England and Wales,...

GEOFFREY McDERMOTT It seems doubtful to me whether it is profitable to discuss diplomacy as a craft. -Douglas Busk seems to have some doubts, too. He apologises for the 'hedge...

DOROTHY GILBERT I look down the long wing Lighted by the whiteness Of dawn on the drifting clouds; Daylight has waked me. The great wing bends groundward, Growing in the low...

and Hudson 63s) Arts and artist AUBERON WAUGH William Morris, His Life, Work and Friends Philip Henderson (Thames and Hudson 63s) Rarely is a reviewer given any book which is...

HUGH SETON-WATSON Franco, a Biographical History Brian Crozier (Eyre and Spottiswoode 70s) General Franco has already been in power for as many years as Stalin, longer than...

In our issue of 14 April 1967 we published a poem by Philip Hobsbaum entitled 'Good Samaritan or, the trouble with Cary.' We pub: fished this poem in the honest belief that the...

NEVILLE BRAYBROOKE My Brother Evelyn and Other Proles Alec Waugh (Cassell 30s) Alec Waugh grew up in a home in which it was considered the most natural thing in the world that...

TELEVISION STUART HOOD If the three programmes in which Lord Reith is interrogated by Malcolm Muggeridge make fascinating television it is because they are, in the literary...

A word from our sponsor ARTS

BRYAN ROBERTSON The collection of recent English painting formed by the Peter Stuyvesant Foundation since 1964 is now temporarily installed at the Tate. There are no immediate...

BALLET CLEMENT CRISP Choreographer of the year so far as British ballet is concerned is the American, Glen Tetley —thanks to Ballet Rambert, who returned last week to the...

Brain storm PENELOPE HOUSTON Billion Dollar Brain (Leicester Square Theatre, 'A') Camelot (Warner, 'U') Of all the trials imposed in the cause of enter- tainment, quite...

FINANCE USA WILLIAM JANEWAY Sterling has gone. Will the dollar go, too? This is the crucial question whose answer will deter- mine the fate of the international monetary system...

NICHOLAS DAVENPORT Peter denied his Christ three times before the cock crowed in the morning but devaluation was denied twenty times in thirty-seven months by Mr Wilson and Mr...

CHRISTOPHER FILDES Tired of all these old clichés, I propose (like Mr Sam Goldwyn) some new ones. The penny can, of course, now look the cent in the face: speculators lick the...

PORTFOLIO JOHN BULL The SPECTATOR portfolio, I am pleased to say, has benefited from devaluation. BATs, Rolls- Royce, Phoenix and Unilever all came up , nicely on the news. Not...

CUSTOS This astonishing market took just a day and a half to get over the devaluation of the pound and the accompanying restrictions and tax increases. The 'mad rush out of...

Sir: Your statement (17 November) that The Pillow Book of Sd Shonagon is almost unknown in the West would not bear investigation. Arthur, Waley's brilliant translation,...

Sir: 1 have no car, but if I had one and wanted to drink, I would leave it at home and use a hire ser- vice. Mr Vinson (Letters, 17 November) is using statis- tics as a...

Sir: May we, once again, invite your readers to send a Christmas or New year greeting to some of the many South Africans who are under house arrest, banned or in banishment...

Mr Wilson and the Lords

Sir: Mr Auberon Waugh says (3 November) 'No- body has yet explained why the hereditary prin- ciple . . . is still sacrosanct when applied to the monarchy.' The fact seems to be,...

The curse of gimmickry Sir: I try very hard to

keep up with current affairs in Great Britain, which is why I have your paper airmailed to me every week. But haven't you let me down in your 10 November issue when, under...

Sir: With all respect to Mr Brunel of the Thomas Paine Society (Letters, 10 November) the evidence that Paine drank, at least in his later years when disenchanted with the...

Sir: Miss Enid Lakeman (20 October) may like to be reminded of a suggestion made a good many years ago by (I think) Dr W. R. Matthews and (I think) in your columns which would...

COMPETITION Competitors are invited to compose a six-line poem, or stanza of a poem, on any one of the subjects given below, using three of the follow- ing four pairs of words...

Competitors appeared to be more concerned to fulfil the rules of the competition than to show off their talents by surmounting them: some of the early sonneteers encountered...