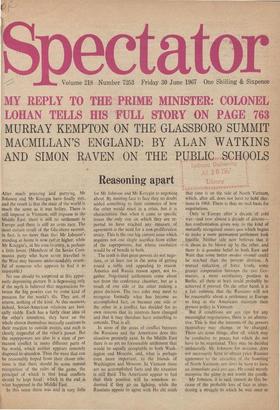 Reasoning apart Librcuy committed. But it is here that a

second myth intrudes, just as powerful and misleading as the myth about negotiations. In fact, almost by definition superpowers do not have to care about face. If the basis of...

All this week the most significant industrial scene in Britain has been the silent and deserted railway freight terminal at Strat- ford, in cast London, where the National Union...

CHRISTOPHER HOLLIS Though Strick's Ulysses shares may boom With Leopold and Mollie Bloom, The point he very strangely misses In celluloiding his Ulysses, Is that Joyce's...

POLITICAL COMMENTARY ALAN WATKINS In Scoop, Evelyn Waugh has a character called Wenlock sakes. lakes, an American journalist (believed to have been modelled originally on Mr...

The aftermath of war

MIDDLE EAST REPORT DAVID PRYCE-JONES On the road to Gaza City, the UNEF vehicles lay strafed to one side—an instant symbol. The tracks of a tank were visible right over the...

NIGEL LAWSON It is not usual for a civil servant to have to use the columns of a newspaper to defend himself against what The Times has called 'a pitiless innuendo' by a Prime...

Day has been this week in the Bankruptcy Court, and it appears that the paper was really started by leading Adullamites. Lord Grosvenor, Lord Elcho, and Lord Lichfield...

Slandered out of business

THE PRESS DONALD McLACHLAN When rises in the price of newspapers are in the air, as they are at the moment, a strange and furtive movement takes place around Fleet Street. A...

THE LAW R. A. CLINE People are more traditional in their attitude to the law than the law itself, is traditional Lawyers are still described as essentially con- servative at, a...

TELEVISION STUART HOOD If proof was needed that the medium is not the message, it was provided by Our World, which took two hours to utter one Malthusian platitude and needed...

Public schools and the facts of life

PERSONAL COLUMN SIMON RAVEN At the age of eight I was a loyal reader of The Magnet and The Gem. How eagerly I longed for the glories of Greyfriars and St Jim's : for the...

MARTIN SEYMOUR-SMITH Until he has passed the first fifty or so pages of William Golding's new novel, The Pyramid (Faber, 21s), the reader may imagine that the author has...

WILFRED BECKERMAN The 'Torrey Canyon' disaster could hardly have provided a more appropriate setting for Dr Mishan's brilliant book on the 'clisamenities' associated with...

IDRIS FOSTER Almost eighty years ago John Rhys's Hibbert Lectures on The origin and growth of religion as illustrated by Celtic heathendom were pub- lished in a volume of 700...

Without a flag ISABEL QUIGLY The Lost Legions containing: The Army of Love Renzo Biasion; The Deserts of Libya Mario Tobino; and The Sergeant in the Snow Mario Rigoni Stern;...

An author in search of a theatre ARTS

HENRY TUBE If Pirandello were still alive—he would have been a hundred on Wednesday—he might have written a particularly bitter play with him- self the central character. Time,...

RECORDS CHARLES REID With two Toscas already in the catalogue (Erede's and Molinari-Pradelli's, both with Tebaldi), Decca have now put in a third: Lorin Maazel, with Birgit...

BALLET CLEMENT CRISP With ten years of blood, sweat, tears and glorious persistence behind it, Western Theatre Ballet is currently celebrating at Sadler's Wells, and rightly...

The shortage of gold MONEY

NICHOLAS DAVENPORT The story of world monetary reform runs through the newspapers like a serial, boring everyone to death except when it works up to a suggestion of murder or...

JOHN BULL Elliott-Automation has been saved. That must rank as one of the most heartening pieces of economic news this year. The £41 million bid from English Electric, together...

CUSTOS It is difficult to see why the stock markets should have been firmer because of the hand- shakes at the summit meeting at Glassboro, USA, but gilt-edged stocks are...

Sir: Driven from my peaceful home in Kensing- ton by what seemed to me an appalling volte-face in British public opinion (or at least among the makers of that public opinion), I...

CONSUMING INTEREST LESLIE ADRIAN On any wet Thursday in the tourist season London can be depended upon to grind to a bait. At such times we get the kind of instant shock...

Sir: Mr Ivor Richard in his interesting letter of 7 April (which I have just seen) seems to be quite in error on two points. He states: 'It has recently been estimated by the...

Sir: Miss Rhys-Williams (23 June) makes one un- founded allegation after another. I repeat what I said in my letter of 16 June, 'The only con- nection between the British...

abortion at the mother's demand and recog- nises that the proposed Bill will, in effect. achieve this result. Her honesty is refreshing after the tactical manoeuvring of some of...

Sir: I have by mischance only read this morning your first letter to the editor in your issue of 16 June on the above topic. To me, it presents only a sour and unbalanced view...

Sir: I cannot agree with R. A. Cline (16 June) that 'minor' motoring offences should be removed from the area of crime and the criminal courts. In saying that someone convicted...

Sir: Commenting on J. W. M. Thompson's article in 'Spectator's Notebook' (9 June) regarding pen- sion increases, I should like to draw your attention to the fact that, at the...

JOHN WELLS The great virtue of a good open-air fairground ride, as opposed to an indoor one with mechanical moans, skeletons jiggling up and down and wisps crf artificial...

Sir: 'Bless him,' writes Auberon Waugh, and, again, 'Bless his old heart . . .' One who, at other times, can be so stridently Christian should surely temper his malice—at least...

Farewell to the Censor

Sir: In your last issue Mr J. W. M. Thompson writes 'the abiding impression is one of amazement that the Lord Chamberlain's function as stage censor was not ended many years...

Sir: If Auberon Waugh has to ask what the letters

in E=mc 2 mean, then he wouldn't under- stand if Lord Snow told him. Cavendish Laboratory, Cambridge I. C. Phillips

A study in lost causes

Sir: Mr Raven, in his interesting and amusing article 'A study in lost causes' (16 June), seems to equate vice with sexual pleasure and virtue with sexual abstinence. In other...