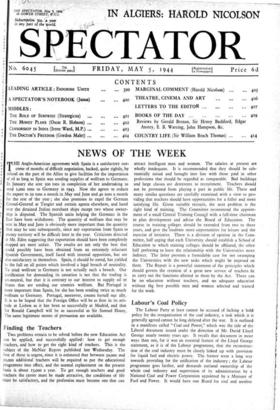 Two problems remain to be solved before the new Education Act can be applied, and successfully applied: how to get enough teachers, and how to get the right kind of teachers....

of months of difficult negotiation, backed, quite rightly, by NEWS OF THE WEEK refusal on the part of the Allies to give facilities for the importation of oil as long as Spain...

The Labour Party at least cannot be accused of lacking a bold policy for the reorganisation of the coal industry, a task which it is generally agreed cannot be long delayed...

The birth-rate, according to the figures of the Registrar-General,. has riSth considerably during the last two years of war, and that for 1943 was • the highest recorded since...

Though the Tribunal appointed to inquire into the administration of the Fire, Police and Civil Defence Services of Newcastle-upon- Tyne found that there was no evidence...

One of the " prefabricated " steel houses recently described by Mr. Churchill, soo,000 of which are to be rapidly constructed under the auspices of the Ministry of Works for the...

The Making of Doctors

The report on medical education just issued by the Planning Committee of the Royal College of Physicians, under the chair- manship of Lord Moran, appears just when the findings...

A T a moment when millions of men throughout Europe are standing on the alert the most satisfactory feature of the whole tense and critical situation is that no one but a...

I HAVE received from the Yugoslav Government Information Office a document whose arrival causes me some astonishment— a reprint of the speech delivered by King Peter of...

THE ROLE OF SURPRISE

By OSCAR R. HOBSON I N the week or so that has elapsed since the publication of what is rather elaborately described as the "Joint Statement by Experts on the Establishment of...

By IRENE WARD, M.P. IT is difficult to appreciate fully the advantages of the British way of life until one views it from the outside world and against a background of other...

By . GORDON MALET A S he peers ahead into the clouded post-war sky, hoping to catch a glimpse of the kind of life he will live, the average doctor finds his mind filled more...

By HAROLD NICOLSON J AM writing this article at Algiers while waiting for an aeroplane I to take me to Tunis. The huts which surround the aerodrome are crowded with service men...

“Le Roi S'Amuse " and 4 , Target for Tonight." Revived at the Academy.--" Hour Before the Dawn." At the Odeon. WHAT an antidote to current screen solemnities are the lighter...

The Royal Academy THE Royal Academy is simply its dull old self. There are good paintings in it : the standard is much the same as that of any large, old-established group. The...

Invitation to the Waltz." At the Playhouse Theatre, Amersham. THE chief hope for the drama in this country today lies not in the West End of London but in the little theatres...

LETTERS TO THE EDITOR Suz,—As a result of the British Film Institute's ten years' experience in working in this field, might I add a few supplementary notes to Mr. Anstey's...

SIR,—Was Mr. M. Clark-Hall, in his contribution under the above heading, attempting to be seriously funny or funnily serious? Was he giving information about the methods of the...

Sut,—The Spectator has always been a favourite journal of the clergy and never more so than now. It may only be a straw showing the direc- tion in which the wind is blowing:...

Sig,—The recent discussion on the question of some Jews who left the Polish Army aroused a vital issue which has been overlooked and strangely neglected by those who should be...

Siit,—May I send you the following comment by an airman in India, dated March 23rd? "Ensa has at last put in an appearance in India. I saw a show by one of their parties this...

Sta,—I note with deep regret that from figures you give it appears that the slaughter of innocents on the roads still continues. Nothing practical has yet been done to try and...

SIR,—Mr. Harold Nicolson, in his amazing "Marginal Comment" of April 21st, completely neglects the fact that it was the United States Government which requested Eire to expel...

A REMINDER ON EELS

Sus,—Sir William Beach Thomas recently referred to our past neglect in taking full advantage of the eel harvest of the Thames. As a matter of fact many of our rivers—perhaps...

SIR,—There is one aspect of Britain's benevolent attitude towards the

neutrality of Eire (a neutrality which is to me, a South-Irishman born and bred, hateful and horrid) which has perhaps not received the notice U deserves. When after the war...

SIR,—In last week's issue your correspondent J. G. Gilchrist writes: "I'm sure you are aware that we in Scotland do not learn Latin. We never did and never will. . . ." This...

Stit,—It was with great surprise and a little pain that

I learned from Mr. J. G. Gilchrist's letter that you have among your readers one who objects to "Screeds of Latin "—I am sure there are many thousands who enjoy them. "They...

Sta,—I have read, with a good deal of pleasure, Miss Simpson's article, "The Willing Horse." It seems to paint a true picture of the behaviour of many of my friends. I do think,...

A LESSON FROM DENMARK

SIR,—We have read with much pleasure Sir Richard Livingstone's interesting and constructive review of our book, Education In Democracy, in the last issue of The Spectator, but...

The Surgeon as Critic

Rational Medicine. By Basil Graves. (Nicholson and Watson. I2S. 6d.) IT would be unfair to describe Mr. Graves as a man with a grievance. But he writes from the standpoint of...

BOOKS OF THE DAY A Short History of Spain The Civilisation of Spain. By J. B. Trend. (H. Milford. 3s. 6d.) IT is not easy to write a short history of. a country whose records...

France is a Democracy. By Louis Levy. (Gollancz. 58.) THE scope and limitations of this book of 150 odd pages are thus defined by its author: "I am trying to present the...

The Morning After Hitler

Excellency X. By R. G. Waldeck. (Geoffrey Bles. zos. 6d.) Tilts is a book of varying merit, beginning poorly and ending well The idea—to discuss the personality who will emerge...

The Origin of Food Habits. By H. D. Renner. (Faber and Faber. Is.) ALTHOUGH some of Mr. Renner's physiology and psychology may be open to argument, his approach to the subject...

Indigo. By Christine Weston. (Collins. tos. 6d.) Wings Deceive. By Edith Simon. (The Bodley Head. 8s. 6d.) AMONG the habitual readers of fiction there must be many like myself...

SOLUTION TO CROSSWORD No. 267 SOLUTION ON MAY 19th

The winner of Crossword No. 267 is MRS. OSENTON, Cottage, Eversley, Hants. Yew Tree

one guinea will be awarded to the sender of the first correct scintson of this week's crossword to be opened after noon on Tuesday week, May 16th. Envelopes should be received...

Crux Ansata : An Indictment of the Roman Catholic Church.

(Penguin Special. 9d.) MR. H. G. WELLS has no difficulty in presenting in this book a concise and effective historical criticism of the political machina- tions of the Papacy....

(Grey - Walls Press. 8s. 6d.) THIS latest editorial progeny of M:. Comfort and his collaborator, Mr. Bayliss, requirzs no little effort from the conscientious reader who...

COUNTRY LIFE IN the not tm-urban town of Luton a

co-operative effort that owes its origin to the excellent Village Produ'ce Association has been most hopefully set in motion by the park superintendent who enjoys the apt name...