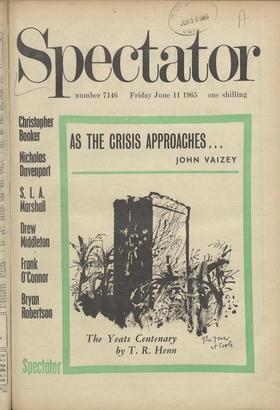 T HE omens for this year's Common- wealth Prime Ministers' Conference are no more propitious than they were for last year's. Then as now the Rhodesian crisis seemed about to...

— Portrait of the Week

THE AMERICAN ASTRONAUTS dominated the week, circling the world at 17,500 m.p.h. The Pope blessed them, the Soviet people congratulated them (dispatching their own moon probe...

Opposing The General DREW MIDDLETON writes from Paris: Something important is stirring beneath the stagnant surface of .French politics and not entirely because there will be a...

STRIKES Wildcats at the Airport

CHRISTOPHER BOOKER writes: Next month when Anthony Sampson, author of

the best-selling Anatomy of Britain, takes over the editorship of the Observer's colour magazine, a chicken will have come splendidly home to roost. It is a most appropriate...

Britain's Last Chance in Space LORD RENWICK One year's subscription to the 'Spectator': B 15s. (including postage) in the United Kingdom and Eire. By surface mail to any other...

I never said it'd be a joke If every broker should go broke. I did say when they earned their bob That jobbers ought to do a job. But who can tangle out the tissue Of price at...

From MURRAY KE.MPTON NEW YORK T has been a week notable for its parts of speech, old-fashioned and new. The poet Robert Lowell sent to President Johnson this let- ter...

The sudden illness, and the probable absence from the House of Commons for some months, of a Scottish Labour Member of Parliament is grim proof of the truth of a sentence in the...

F OR an aimless occupation on part of a wet Whit Monday I recommend browsing through the return of general election expenses now pub- lished for all candidates. Most money seems...

Mortgages at 7 per cent

One of the largest building societies raises it. rates for new mortgages to 7 per cent and Mr. Crossman's rescue act becomes politically more urgent and less realistic. The cut...

Mac Wilsonism By ALAN WATKINS W ITH every week that passes, Mr. Harold Wilson reminds one more and more of Harold Macmillan in his last phase. There ' the same reluctance to...

My sympathies on the whole are with the men of Skye who succeeded for one day in ousting the American skymen from the lead story in The Times. True, I have never put foot on...

As the Crisis Approaches . . .

By JOHN VA1ZEY ALL sorts of signs may be found, as you look round the world, of a great storm blowing Up. Britain is the storm centre. It is this which Will dominate British...

. General S. L. A. Marshall, who writes on Liddell Hart in this week's book pages, is one Of the most distinguished military historians in the language. He fought in France in...

Yeats and the Critical Pendulum

By T. R. HENN I N this centenary year some interesting cross- currents are perceptible in the valuation and revaluation of Yeats; and they are, I think, a little different from...

SIR,—If anyone's interested. I think my daughter to marry Mr.

Nkosi to Of course, she must choose for her I should prefer Mr. Isherwood. self. 38 King's Road, Colwyn Bay R. 0. SALMON

Sia,--1 have been authorised by the family of the late Aldous Huxley to prepare an edition of his letters for publication by Chatto and Windus of London and by Harper and Row of...

Sia,—Although the Russians have promised to be- have themselves at Wimbledon this year, your com- ment on their tendency to throw diplomatic faints when confronted with tennis...

SIR,—Myself and my teenage colleagues are fed up with the sudden flood of newspaper writers and editors who have, so it seems, suddenly realised that there is such a thing as...

Amis and the Eggheads

SIR. —AS Mr. Raven so rightly says in his review of Time iallICS Bond Dossier, 'chacun 3 son goat.' If Mr. Kingsley Antis does not enjoy folk-songs and poetry-spoken-to-jazz,...

SIR,—As I have taken a keen interest for many years in the study of human genetics I was naturally sur- prised and not a little shocked at the observations being made by Mr. H....

Sm.—My article in the Spectator dealt with the Coalition of 1915 as an aspect of the great battle for Freedom or Control, which it was. This battle began long before the...

SIR,—A rescue operation is required for the word 'theology,' which has recently been found too often in the wrong company. Mr. Harold Wilson, I think, started its downfall when...

How to be Flexible and Consistent Too By BRYAN ROBERTSON ( * IN completing the final draft of The Great Gatsby, Scott Fitzgerald sent the typescript t Ciertrude Stein for her...

S UKELY Mr. Harold Pinter is something more than a practical

Our Man at St. Mark's (Rediffusion), a series I had missed until then, I found this vaguely Freudian concept pro- vidin g the twist to the plot. Young man objects when Vicar...

A Knack Worth Having The Knack. (London Pavilion, 'X' certificate.)— Baie des Anges. (Paris-Pullman, 'A' certifi- cate.)- --Those Magnificent Men in their Fly- ing Machines....

By S. L. A. MARSHALL rIANDOUR compels the statement that there are ,,.,,but two giants among the many military writers and theorists of our era. The lustre of B. H. Liddell...

FOR two days I determined to read these letters as though I had never known Berenson, or read any of his books. There emerged a puzzling figure, extremely impressionable as a...

Not for Publication. By Nadine Gordirner. (Gollancz, 21s.) NADINE GORDIMER is a writer whom it is easy to underestimate. It may appear strange to make such an assertion, since...

AVANTI I N January 1964 Granada Television held an eight-day conference in Knutsford and Man- chester. The conference was attended by the company's directors, executives, and...

By CUSTOS T HE reduction in Bank rate to 6 per cent last week actually caught the gilt-edged market unawares. It had begun to lose hope of any fall while interest rates were...

Financial Policy Reviewed-1 By NICHOLAS DAVENPORT N ow that Bank rate has at last come down to 6 per cent without loss of foreign con- fidence—the credit squeeze having been...

By LESLIE ADRIAN Many of the exotics which appear in tins— though not by any means all—come from Ameri- can canners. Fortnum and Mason, for instance, carry tinned tortillas (6s....

Another Part of the Forest By STRIX IN the country Sunday used to be a dies non, a day on which nothing hap- pened or was expected to happen. Now it is more . likely to prove...

Regency Colonial By FRANK O'CONNOR The city was an sesthetic blank, and the only column of the Cork Examiner that had literary flavour was the 'Births, Marriages and Deaths.'...