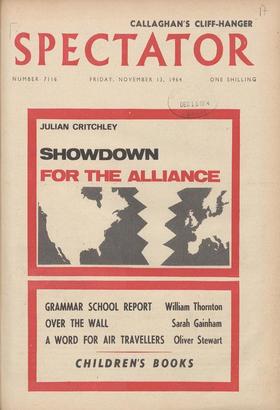 Portrait of the Week— FOUR WEEKS GONE, and those one

hundred days were be g innin g to fly by: the Government passed its first ordeal by tellers by g ainin g a majority of seven in the openin g division of this Parliament. But...

T HE Spectator would be the last to com- plain that the new Government is impro- vising on its foreign policy. After all, what the Labour Party was threatening out of office—on...

P RETTY well all that happened directly when Mr. Callaghan sat down after his maiden Budget was that the cost of petrol and diesel oil went up by sixpence a gallon. It was not...

THE QUARREL GOES ON

All Ears on Brezhnev, All Eyes on Chou OUR MOSCOW CORRESPONDENT writes: There he was, flanked on the left by Kosygin and on the right by Zhivkov. The grey, high collared tunic...

Chou on the Grapevine

VICTOR ANANT writes from Singapore: The fact that there have been no dramatic reactions in South-East Asia to the Chinese nuclear explosion is not surprising. It is not, as some...

Over the German Wall

From SARAH GAINHAM DRESDEN D URING many conversations both with party officials and private people during my nine-day visit to East Germany, it has always been they who asked...

Mr. Wilson and the Left By ALAN WATKINS Dressing the Part Lines written on reading of criticisms of the sar- torial habits of the new British Prime Minister, accused of...

At the Church Assembly

Slogans and Crusades By JOHN GOSS N o one familiar with the Assembly would be surprised to hear that it dislikes slogans, and in the Mutual Responsibility debate, a lot of very...

Showdown for the Alliance?

By JULIAN CRITCHLEY T HE showdown is traditionally the climax of all good Westerns. The champions of good and evil walk warily towards one another down Main Street. The only...

One often reads that Americans consider understatement to be a prominent British charac - teristic. I've just been reading in the New York Times an account of General Mar is...

Tun curious affair of the missing Tory voter in the steel division was solved by the discovery that he was there after all. The Govern- ment Whip couldn't count. This of course,...

It is a particularly distressing thing that when- ever a mother hands over an unwanted child to an adoption society she must fill in a form, one of whose questions asks her to...

one saw the obituaries after reading the admirable first instalment of his Memoirs of the Forties in the current issue of the London Magazine. And it is as a man of the 1940s...

Death of a Leper

Mr. Herbert Bowden, winding up the debate on the Queen's Speech, made an oblique reference to Mr. Wilson's crude assault on the new Mem- ber for Smethwick. I suppose it comes as...

The View from my Grammar School

By WILLIAM THORNTON* T FIND it very difficult to write about education, ljust as I suppose a man who earns his living operating a pneumatic drill would find it difficult to...

I am, I fear, a member of that most despised circle of art amateurs who just 'know what they like.' But at least I can go to Mr. Ntiro's exhibi- tion next week at the Piccadilly...

A Word for the Air Traveller

A Shilling for a Suit By BRIAN BEHAN A SWINEY 'flu .. hit our Seamus and knocked him into bed. Lying there with his big nose streaming, he begged me, 'Boony, do my milk round...

MR. WILSON'S SPEECH SIR,—Both your leading article and Alan Watkins's 'Political Commentary' condemn the Prime Minister in most indignant terms for breaking the rules of the...

SIR,—Quoodle's swipe at Anne Scott-James and Katharine Whitehorn (hooray for them both, say It) contains some perilous sentiments. He seems to think that mare-and-more and...

SIR,--You will probably close : this correspondence shortly. and I for

one will be glad—because, as Mr. Lucie-Smith says, there are more practical things to do. But I hope you will give me this opportunity to correct Mr. John Tripp, who shows a...

Sia,—I hope I am no carping critic. At least let

me first say that I thought that 90 per cent of Your leading article last week was excellent, but there was a 10 per cent which in my opinion completely spoilt the effect....

Sta,---I was impressed by your admirable 'Political Commentary' on the

'leper' speech as a major parliamentary blunder. But we all blunder at times; • the real point surely is that at the first moment of power Mr. Wilson chose deliberately to...

SIR, -- You criticise Mr. Wilson for the way he re- ferred

to the Member for Smethwick; you call him vicious and describe his phrase as vulgar and venomous. I do not know what Mr. Griffiths had said, but his case apart, racialism is...

SIR,--t must repudiate most strongly the statement made in last week's. Spectator by Mr. John Tripp in which he asserts that there is an organised faction of poets linked...

JOHNSON'S . AMERICA' • Sts,—As an American studying in England I

appre- ciated your covet age and . analysis of 'Johnson's America' (November 6). I especially enjoyed Mr. Kempton's article on 'The Ruins Left By Goldwater.' However, I must...

SIR,—Having read Mr. Anthony Judge's letter, we can but sympathise with Mr. Judge at the public display of his ignorance. Does he realise that we live in a democracy where the...

SIR,—You write that .eighty-one of the last one hundred paragraphs

in the 'Spectator's Notebook' were written by you and that you would be in- trigued to have comparable statistics from other columnists. Of the 'Notes by the Way' in East Africa...

THE LIBERAL VOTE • SIR, —Might I suggest three ways of assessing

how one can put the Liberal vote into perspective? How many more Liberal candidates stood in 1964 com- pared with 1959? How many lost their deposits? What is the significance of...

SIR, —Good wine being one of the civilised—and, one hopes, civilising—pleasures of life, lovers of what 'maketh glad the heart' must deplore the way in which a piece of fair...

SIR,—Never having regarded myself as a particularly sinister character, I

am somewhat appalled to find I am branded in your columns by John Tripp as the arch-plotter behind a 'very loose grouping' (of poets) 'based on the weekly Tribune.' This is the...

SIR,—Quoodle asks for statistics about other column- ists. There is only one of me. Sunday Express, Fleet Street, EC4 [One at a time.—Quoodle.] CROSS-BENCHER

'ALL RACIALISTS' SIR,—Your headlining of Leo Baron's article of the

October 9 issue, together with the article itself, con- stitutes yet another of the increasingly biased and misleading reports on Rhodesia, which you appear to take great...

By NEVILE WALLIS THE selection from his life's work entitled 'Dun- can Grant and his World,' at Wildenstein's Gallery, offers much more than art opportunity to salute the most...

SIR,—We are delighted to see that you have marked the file of Kolin Bakatov, the Bulgarian - prisoner adopted by the Edinburgh North Group of Amnesty International, closed,...

let me say at once, then, that I have never heard the Wozzec - k orchestra sound more lucid, for all its complexities, or more perturbingly beautiful than it did this time under...

MODERN ballet's most tan- talising question, 'What- ever happened to Antony Tudor?' has found an answer. It found it, to be precise, on September 28, 1963, in Stockholm, but I...

Raids on the Inarticulate

IT is good to have a substantial collection of Signor Montale's poems available at last, in a bilingual edition that has the added virtue of being beautifully printed and...

The Dragon and the Devils

Winter's Tales 10. Edited by A. D. Maclean. (Macmillan, 21s.) THE little magazine era died here not long after the last war and with it one of the heydays of the short story in...

The Defence is one of Nabokov's early novels. It was originally written, in Russian, during his emigre years in France and Germany,. and was first published in book form in...

M. Aluko. l ‘l['Ett the Irish giants come the little people. I've not previously encountered any of the books, as °PPosed to the literary reviews and social °biter d icta, of...

Late Call. By Angus Wilson. (Secker and War' burg, 25s.) THE predicament of the late-middle-aged in the mid-twentieth century is the chosen territory o t all Angus Wilson's...

You Come Too BY ELAINE MOSS M v first teaching assignment, back in 1945, was in a reception centre for children, German, Polish, Dutch, French, from the con- centration camps...

Turn of the Screw

Exploration of Africa. By Thomas Sterling. (Cassell, 21s.) SELECTING books as presents for children is one of the most difficult things I know. Only one thing is...

My Life with the Animals of Africa : The Great Plains. The Rivers and Lakes. Both by Armand Denis. Photographs by Des Bartlett. (Collins, 12s. 6d. each.) The Bible Encyclopedia...

The World Before Six

BY the time the modern child goes to school, he may well have a nodding acquaintance, through picture-books, with much of the world, without having been much farther than the...

The Island of Fish in the Trees. By Eva-Lis Wuorio. Illustrated by Edward Ardizzone. (Dobson, 15s.) Colonel Sheperton's Clock. By Philip Turner. trated by Peter Forster....

NINA BAWDEN has a natural talent for writing children's stories. On the Run (Gollancz, 15s.) features the already popular Ben Mallory, whose kind heart gets him into trouble....

• HISTORY and fiction are often uncomfortable bedfellows. The historian in the writer inhibits the story-teller, and yet if the story-teller does not possess a strong sense of...

The Third Salvo By NICHOLAS DAVENPORT This suggests another bankers' ramp, but— shades of 1931!—this was the last thing Mr. Wilson would have tolerated. We can draw on the...

By LOTHBURY T ORD NETHERTHORPE, the chairman of Fisons, L a says in his annual report to shareholders that he 'cannot promise at this time that there will be a large increase...

By CUSTOS IN• the first thirty days of the new Government equity shares have fallen by about 10 per cent from the top and most professionals think that there is another 10 per...

Wave11's Eye By STRIX READING Mr. John Con- nell's admirable study of Wavell, I found myself wondering what happens to our visual memories of the dead. The archives of memory...

Unhappy Event By LESLIE ADRIAN OF all the services which affect daily life, the most difficult to test with any thoroughness and impar - tiality are the different branches of...

By ALAN BRIEN M v definition of an intel- lectual is anyone who can understand the fifteen-page 'Tabular Synopsis of Categories' at the front of Roget's Thesaurus. This is the...