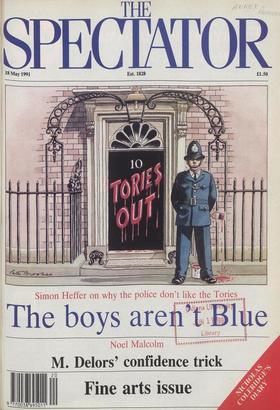 M r John Major agreed to meet Un- ionist politicians in an attempt to save talks on the future of Northern Ireland. The Prime Minister also agreed to meet the British Medical...

Mr Major is open to suggestions from the Emperor of Patagonia NOEL MALCOLM W hen M. Jacques Delors announced last weekend that the European Commis- sion acted out of 'full...

NICHOLAS COLERIDGE W ith less than a week to go until the scheduled birth of our first child, I have been getting into the swing by attending a course of antenatal classes....

The recreations of Sir Nicholas, or what a condom cannot do CHARLES MOORE A nyone who frequents the Palace of Westminster cannot avoid being familiar with Sir Nicholas...

THE FORCE IS NOT WITH THE TORIES

Simon Helfer explores the reasons for Government dissatisfaction with the police and their own disillusionment with the Conservatives The Tories are right to feel aggrieved....

THE influenza, which has killed an Archbishop and a Member of Parlia- ment, has at last attacked Mr. Glad- stone and the Prince of Wales. Mr. Gladstone has had fever on him all...

Anton La Guardia finds out what has happened to the descendants of the people despised by the Jews Jerusalem THE SAMARITAN men gathered at dusk around a narrow trough on the...

TAKEN FOR A TERRORIST

Mary Ann Sieghart rues the day she tried to fly with United Airlines YOU ARE a Spectator reader, an honest, law-abiding, professional with moderate political views. You think...

BEARDED IN MY OWN DEN

K. Subrahmanian wonders why he got into trouble when he stopped shaving Hyderabad I HAVE been shaving for years — myself, of course. It is a boring business. Standing before...

Terence Kealey argues that the state should never have got involved in education EXACTLY 100 years ago, Parliament began the nationalisation of schools. People now deplore the...

persist . . I AM all in favour of religion, so long as I am not expected to take part in it, for I have observed that on the whole it does wonders for people's manners. Alas,...

ANGER IN THE CHURCH HALL

Diana Winsor discovers why parishioners in Worcestershire feel ill used by the diocese Abberley SINCE 1974 there have been many such gatherings as this in village halls...

THE POLITICS OF FAMINE

editors should scrutinise political charities more closely THE severe censure passed by the Charity Commissioners on Oxfam for political campaigning prompts the question:...

FEAR was spreading, though, and credit contracting. Within a fortnight another eight fringe banks were lined up outside the Discount Office. Within a month, the Bank was...

THE Virgin Islands have a bank holiday for the Day of the Organic Act. I once wrote to ask Jim Keogh whether this Caribbean banking practice was observed in St Kitts, and if so,...

NONE of this was of Keogh's making. He could only observe, and warn, as he did, repeatedly and formally, that it would end in tears. The Crown Agents tribunal, the fullest and...

Sir: We are pleased that Robert Karniol of Jane's Defence

Weekly has reaffirmed his own published research that British troops were training Khmer guerrillas in Thailand (Letters, 11 May). Let's be clear — it is this that Derek Tonkin,...

It's that man again

Sir: With draft-dodging Dan Quayle henceforth being kept out of the White House only by President Bush remember- ing to take his daily dose of Digoxin, your Greek columnist...

Sir: 'For the record once again' (say John Pilger and David Munro, Letters, 11 May) 'the Singaporean delegate to the UN was not shown in our film shaking hands with anyone.'...

Sir: In his eagerness to present the Kavan affair as no more than an attempt at self-vindication by the Western Left (`The Left has found a martyr', 11 May), James de , Candole...

Sir: I found the article on the loss of HMS Affray ('Affray in the Channel', 27 April) most interesting. I was the medical officer on HMS Reclaim — the deep-diving ship which...

Sir: Robin Harris has misunderstood (Let- ters, 4 May) the point I was making about Catholic social and political theories. I was not complaining that modern popes had failed to...

Sir: I wonder if I am alone in noticing the ubiquitous misuse of the word 'nubile'. Even in The Spectator I have seen it used as though it were synonymous with naked or...

Sir: A few weeks ago in the Diary (13 April), A. N. Wilson revealed that the new Archbishop of Canterbury, George Carey, is the brother of John Carey, the Merton Professor of...

Sir: I am afraid that Christopher Fildes (City and Suburban, 27 April) and Kate Mortimer (Letters, 4 May) have both missed the point about 'Best Advice' and Home Loans....

Andrew Robinson A STRANGE AND SUBLIME ADDRESS by Amit Chaudhuri Heinemann, f13.99, pp.209 T he Romance of Calcutta: not a phrase that springs readily to the lips of most visit-...

The generosity of an Essex Man

John Biffen MINISTERS DECIDE by Norman Fowler Chapmans, £18, pp. 372 P ublish and be damned can be the only policy of any self-respecting news- paper', writes Norman Fowler. It...

The lure of paranoia

The shade and loneliness and mire

Andro Linklater THE BURN by James Kelman Secker & Warburg, £13.99, pp. 244 E om his photograph on the dust-jacket of The Burn, James Kelman stares at the camera with a...

Francis King THE INDOOR BOY by Anthony Sher Chatto, f13.99, pp. 277 A ntony Sher has given a number of fine performances but none finer than as that greatest of all theatrical...

Cows turn grass into cow, milk and dung. They mow and manure, combine excretion with harvest, bale grass inside stomachs, then push it out behind them as they go. Cows smell of...

Made young with young desires

From dentist to Governor General

Seurat (Grand Palais, Paris, till 11 August) Getting to the point Elizabeth Mortimer T he Seurat retrospective exhibition currently being held in Paris at the Grand Palais is...

Tales of Cork Street Alistair McAlpine I n 1973, the last time that the world's art market fell on hard times, I owned a book- shop in Cork Street, trying at that time, rather...

The Fan Museum (12 Crooms Hill, London SE10) A woman's weapon John Henshall P erseverance is a marvellous quality, as useful in the arts as in anything else. Readers with...

The Doves Bindery 1893-1921 (The British Library, till 7 July) Bound for glory Tanya Harrod In fact Cobden-Sanderson's bindings, first • entirely by his own hand and later...

Sorting out the summer Peter Phillips selects the best of this year's Proms concerts T he arrival of the annual Prom prospec- tus in the nation's bookshops is traditional- ly...

The Miser (Olivier) Arsenic and Old Lace (Chichester) Funny business Christopher Edwards T his production of The Miser continues the debate about the relationship of 'trans-...

Gabriele Annan will be back next week

Stuck in the mud Taki L eave it to good old Ted Kennedy to come up with the best line since Willie Sutton, the famous American bank robber, said he robbed banks because that's...

Far from perfick Martyn Harris I should have reviewed The Darling Buds of May before, but have been away a while, so recent columns have been, in Blue Peter style, ones I...

Across a crowded room Jeffrey Bernard A man came into the pub the other day carrying one of those awful mobile tele- phones. I asked him if I could use it and he kindly...

American hero Zenga Longmore W ith difficulty I negotiated Omalara and her pushchair over the jagged, broken paving stones that mark my approach to Brixton Market. Stones that...

Join the louts of Lebanon Auberon Waugh T raditionally, our annual offer from Chateaux Wines is seen as little more than window-dressing around the introduction of a new...

Short and sweet Raymond Keene N igel Short has produced what can claim to be the greatest result ever by an Englishman in chess, a share of first prize in the Euwe Memorial...

England for Prime Minister Frank Keating I HAVE a recurring dream that England are going to wallop the West Indies in the Test series. So vivid is it that I can recommend to...