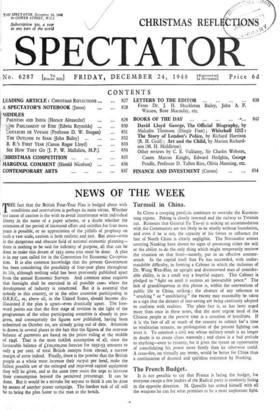 In China a creeping paralysis continues to overtake the Kuomin- tang regime. Peking is closely invested and the railway to Tientsin cut. Rumours that General Fu Tso-yi is...

It is not possible to say that France is facing the budget, for everyone except a few leaders of the Radical party is resolutely facing in the opposite direction. M. Queuille...

T HE fact that the British Four-Year Plan is hedged about with conditions and reservations is perhaps its main virtue. Whether the cause of caution is the wish to avoid...

It is, of course, deplorable that fighting should have broken out again in Indonesia, and nobody would deplore the turn which events have taken more than the Dutch themselves....

The Minister of Education made no very strong case, in the course of the adjournment debate last week, for his Circular i68, forbidding boys (or girls) to take the new General...

Between April and September of this year, the three British air line corporations lost money at a rate slightly below L8,000,000 a year. In the previous financial year they had...

The Church and the Native

The South African bishops have done the Church as well as the State a notable service in the statement they have issued on the racial discrimination which the late Jan Hofmeyr...

T HE Christian world commemorates this week an event in his- tory, an event which has done more than any other in recorded time to determine the path humanity shall take. $o...

Two cricket balls figured prominently in Tuesday's papers. One was

hit ; the other wasn't. The one that was went for a six, and landed 98 yards beyond the bat on a lady's head. It turned up in the King's Bench Division on Monday, when Mr....

I am glad to see that The Times in a

recent leading article, both discusses the importance of the work of almoners in the new National Health Service and makes reference to the excellent monthly, The Almoner, which...

I listened with considerable aesthetic satisfaction one day this week

to a vigorous and heart-felt philippic by a distinguished literary personality on ,what he called the domination of the listener. Normally a country-diveller, he came to London...

The Catering Wages Commission is back on the subject of

staggered holidays—and no wonder, for the August rush is bad for hotels, which have to refuse thousands a - applicants whom they could accept, at considerable profit to...

I HOPE the nation as a whole realises how much it owes to the Attorney-General, Sir Hartley Shawcross, for the part he has played in the proceedings before the Tribunal at...

What has made the Sunday Times go all genteel ?

By HORACE ALEXANDER T HERE have been moments during recent weeks when it seemed as though the "undeclared war" between India and Pakistan I . , in Kashmir must almost...

THE PARLIAMENT OF EIRE

By EDWIN REYNOLDS T O a visitor accustomed to the House of Commons, the Dail offers a contrast which is partly physical, but, in its more striking aspects, predominantly...

By D. W. BROGAN S TEVENSON, I believe, asserted that it was better to travel than to arrive. With this view I firmly disagree. Fate, economic necessity, professional duty force...

THE OUTLOOK IN SIAM

By JOHN BAILEY T HOSE of us who lived and worked in Siam during the years between the wars did not find, when we returned to England for our periodical spells of leave, that...

By CANON ROGER LLOYD T WELVE months ago many people were busy guessing what changes the nationalisation of the railway companies would bring, and those who knew most were...

AMID THE SWEET SHAFT HAY

SEE HOW THEY GO

By J. P. W. MALLALIEU, M.P. V IKINGS, in open boats, crossed the Atlantic hundreds of years before Columbus. How they kept their boats afloat in Atlantic seas or endured the...

NICOLSON • WAS interested by a photograph which appeared in the news- • paper last week of a lady who keeps a turkey-farm in Norfolk. Such are the depredations of those who...

THE THEATRE September Tide." By Daphne du Maurier. (Aidwych.) Tins is really a play for the ladies. It has all the rich, predictable, faintly illicit attractions of a box of...

THE year 1927 was a vintage year for opera. The titles of the operas which were given first performances during those twelve months bring back the taste of the period most...

AN Interesting collection of modem French paintings may be seen at the Hanover Gallery, including a fine Soutine and a fine Vuillard. Upstairs a group by the neo-romantics of...

Moving alone in a shy zone of sun, Scaling the discontinuous terraces, I hear a surf that shakes above the sea— The choking of the clustered heather-husks, Arid amongst the...

STATE versus SCHOOL SIR, I appreciate Dr. Happold's point of

view, for in certain respects our ideas are complementary rather than contradictory. I differ from him because I see little hope of the universities accepting the policy that he...

- LETTERS TO THE EDITOR

UNIVERSITY AWARDS Sin,—In criticising the numbers in the report of the working party on university awards, "Cambridge Tutor " is being unfair. The working party stressed that...

Snt,—My friend Mr. Arnold-Forster mistook the aim of my letter (in The Spectator of November 26th) when he supposed that I wished to circumvent a basic principle of the United...

Sm,—It must be quite twelve years now since you published a letter of mine in The Spectator in which I predicted that, in Spain, Franco had come to stay. Those who recall the...

Sta,—May I correct a mis-statement in the article on University

Awards? The proposal of the working party was not " to set up a central clearing- house for state scholars " only, but for all applicants for entrance to universities. The...

Sra,—I would like to support Colin Mcdonald in the contention

that the " moderating process " within the Communist regime is contrary to all experience in countries where Communists have seized power. In Malaya, from which_ country I have...

Sta,—Does Mr. R. Kennard Davis imply that we should take the Authorised Version, or any other English work of its period, as a justification for ungrammatical constructions? If...

THE CAUSES OF CRIME

Sra,—Mr. R. H. Cecil, in his article The Increase in Crime in your issue of December 10th, says that Miss Margery Fry and Lady Allen of Htirtwood have between them disposed of...

Six,—Prebendary Sanders' letter raises issues which have a practical bear- ing upon life lived in the modern intellectual climate. Yet one cannot help wondering what is the...

am sorry that Colin McDonald has unavoidably to break off the correspondence. I write now not to make fresh debating points, but in an attempt to distinguish tietween the...

PLAYS FOR THE HOLIDAYS

THE dramatic critic is reminded at Christmas that Nature intended him not only to be childless (doubtless a comparatively easy feat, if you give your mind to it) but also to be...

IT used to be said that spring had arrived when you could cover five daisy flowers with your foot. If that is a true test, spring was with us this December. Daisies (which...

Mistletoe Hosts One of the imports that come to a

climax at Christmas is mistletoe, which, in general, is not as common in England as one might expect or perhaps as it used to be when the Druids found it even on oaks. It is...

In the Garden In spite of admiration for the continuous

cloche—the most protective of garden inventions — I have always felt an unreasonable preference for the old French bell-jar, which has become too cumbrous and expensive. Now I...

A Police Biologist The old music - hall advice, " Ask a

Policeman," has been quaintly justified by a traveller who brought over some chameleons from Africa. He wanted, and sought in vain for, a male of the species, and finally in...

Seasonable Preferences It remains an ineradicable belief in country places

that a cold Christmas is better for our health than a warm; and though this may be wholly unjustified, at least in regard to the more antique members of the village, it is...

Death and the Robin

Encyclopaedia of Superstitions. By E. and M. A. Radford. (Rider. 16s.) IN spite of shortcomings, this is a book of very considerable interest. Indeed, it would hardly be...

Whitehall 1212: The Story of London's Police. By Richard Harrison. (Jarrolds. 15s.) " REAL detecting," writes Mr. Harrison in a concluding chapter on The Detective in Fact and...

IT is good news to learn that a third series of these documents is to be instituted which will cover the period from March, 1938, to the outbreak of the war. We shall soon,...

WHEN the Tate Gallery and the Victoria and Albert Museum provide house-room for the exhibitions of the Society for Education in Art ; when a national newspaper organises a show...

THE Hibbert Lectureship was founded in 1878 to encourage the study of religion in its historical, comparative and philosophical aspects, " with the object of directing the...

End of the Bismarck

The Bismarck Episode. By Captain Russell Grenfell. (Faber and Faber. 12s. 6d.) CAPTAIN GRENFELL'S is, I think, the first full-length critical account of the ' Bismarck'...

I . By Christopher Sandeman (Phoenix A Wanderer in House. 45,.) Inca La UNrra, the arrival of the c quistadores writing was unknown to the people of Peru. No comaporary...

Coming This Way ? By Derek Walker-Smith. (Sampson Low. 7s. 6d.) THE Opposition has two formidable myths to overcome before it is successful in wooing the British electorate....

SOLUTION TO CROSSWORD No. 507

Token for one guinea will be awarded so the sender of the first correct solution of this week's crossword to be opened after noon on Tuesday week, y an uary 4th. Envelopes must...

The Photian Schism : History and Legend. By F. Dvornik. (Cam- bridge University Press. 35s.) THE name of Photius is associated with the great schism between the Churches of...

Thomas Chatterton. By John Cranstoun Neva]. (Muller. 10s. 6d.) THERE would be, perhaps, two justifications for writing another book on Chatterton—already the theme of so much...

By CUSTOS AN external balance by 1952—at a modestly higher standard of living than we now " enjoy "—this message of Britain's four-year plan under Marshall aid is not calculated...

The Minor Tradition of British Mythology. By Lewis Spence. (Rider.

16s.) MR. SPENCE has a vast store of knowledge about monsters, mermaids, seal-folk, giants, ogres, laidly worms, lake-ladies, hobs and boggetts. Something (which is not style)...