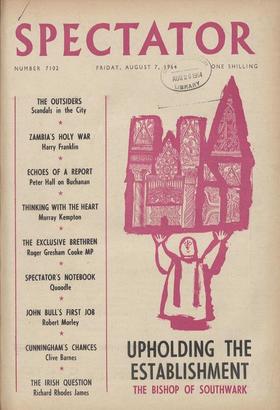 THE 1964 BATTLE OF HASTINGS produced one death and seventy

arrests, after Mods and Rockers chose the resort for their August Bank Holiday fracas. Casualties may have been light by Hastings stan- dards, but the road death toll—at...

1 As"' year our causes celebres were mainly d I to do with sex and security. This year they are drawn from the world of business. Mr. John Bloom, the Ferrantis, and the...

ARNOLD BEICIIMAN writes from Saigon : I am unsure about a layman's right to intrude Aristotle into a discussion about the State of journalism. Risking all, I cite the...

I T would be perverse to criticise the High Com- missioner of Southern Rhodesia for seeking to persuade the readers of the Spectator and The Times that by the policies of his...

PAUL LEWIS writes from Brussels : It was grey and sultry in Brussels last week, but for the Common Market Council Mediter- ranean sunshine was already in sight. The Ministers...

HARRY FRANKLIN writes from Lusaka: Dr. Kaunda faces the first test of his strength in dealing with the serious outbreak of violence in the Chinsali district of the Northern...

JAMES TUCKER writes: Provincial and a trend-follower, I once went to a Soho strip club when on a trip to London. A delightful girl willingly joined me over what Mr. Henry Brooke...

ECHOES OF A REPORT-2

The Slow Progress of Buchanan By PETER HALL W HAT do we do about Buchanan? When the Mayor, Aldermen and Burgesses of the City of Bath read their Buchanan Report and heard its...

The Rise and Fall

Lord Sandwich, whom his Prep School knew As Master Victor Montagu, About the age of seven took The name of Viscount Hinchingbroke. And that in fact was still his name...

Thinking with the Heart

From MURRAY KFMPTON WASHINGTON VERY1HING Senator Goldwater has done E i since his nomination seems as deliberate a violation of the rules for political success in the United...

By ROGER GRESHAM COOKE, MP HAVE been overwhelmed by a flood of stories lof broken homes, strange family exclusions and suicides since I began delving into the activities of the...

By CLAUD COCKBURN T an laughter and applause recorded when dwarf trips giant may be ill-judged. Perhaps the giant is good at heart, and the imp quite malign. But our resident...

What a fascinating piece Aunty's Special Cor- respondent turned in from Hastings. He (or perhaps she) went trotting about among the young invaders asking exactly the sort of...

The End of the Case Panorama, following its custom of

taking up Spectator debates, had this week a splendidly in- articulate item on public opinion polls. Do you realise, reflected Dimbleby, as if he just thought of it, that with...

The Guardians One reads a lot these days by various

self- appointed Cassandras about the dangers of `creeping totalitarianism' in Britain. Yet last week we saw a most important decision by the Court of Appeal in reversing the...

Readers of the Spectator will need little re- minding who Vigne is. He is a former national vice-chairman of the South African Liberal Party and, till events made it impossible,...

The Smashing of a Party One thing the Prime Minister

and his Govern- ment are trying to condemn and prevent is the South African Liberal Party. Once again readers of the Spectator will be familiar with the growing success of this...

The Bomb in the Station But the arrests of the

Liberals are not all. There is the peculiar affair of the bomb planted in Johannesburg station on July 24. Side by side with stories of the search for Vigne and of further...

By THE BISHOP OF SOUTHWARK O N what was probably the last full day of this Parliament, the House of Lords debated the nation's hospitals and the Commons the eucharistic...

Door to Door By ROBERT MORLEY `You'RE disappointed that it's a vacuum cleaner?' `Not exactly disappointed,' I told him . . . 'it's just that I thought, reading your ad-...

SIR,—Mr. John Homer's piece on our special num- ber on the Thirties (Spectator, July 31) is really rather misleading and for the sake of those readers whom we cannot afford to...

SIR,--Ian Gilmour writes that Lord Devlin has been brilliantly demolished by Professor Hart in Law, Liberty and Morality. Lord Devlin buttressed his argument by examples from...

SIR,-1 regret to see in last week's . Spectator that Leslie Adrian has transferred to Oscar Wilde—and spoiled—the best of American jokes: `Good Ameri- cans when they die go to...

MIXED BATHING SIR."—Hurrah for Leslie Adrian! It was high time

that someone protested at the LCCs Victorian prudery about mixed bathing at the Highgate swimming are one of the statistician's typical pools. w e i.e. about half of us are...

THE SIXTH OF JUNE

Sia,—My copy of the Spectator of June 5 has just arrived in New Zealand. I write to say how much I enjoyed fain Macleod's article on D-Day, especially his description of the...

SIR,—The Robbins Report indicates that one out of seven of our highly selected university entrants fails to complete his course. At present very little is known about why this...

By CLIVE BARNES The episode, which is the opening of Winter- branch, is not entirely typical of Merce. Cunning- ham. But it emphasises the reasons why his London season has...

In all the years I've known him, Norman Reid has never confided any private penchant or prejudice beyond his general absorption in twentieth-century movements in art. His is an...

It just shows how unfair life is, for about a month ago on the third circuit there appeared, very quietly, another Victorian space-travel movie called From Earth to Moon. This...

By NEVILLE CARDUS In 1928 Bayreuth was still dominated by the traditional sway of Cosima. The general stage set-up for all the Wagner music-dramas more or less observed...

The Music of Politics

By MALCOLM RUTHERFORD Henry VI. (Stratford.) THE distance of John Bar- ton's adaptation of Henry VI from the original text has to be seen to be be- lieved. Watching the pro-...

The Irish Question By ROBERT RHODES JAMES ' N a memorable passage in the biography of his father, Sir Winston Churchill compared con- sideration of the first Home Rule Bill...

The Stories of Mary Lavin. (Constable, 30s.) Stories : Volume 2. By Morley Callaghan (Mac- Gibbon and Kee, 18s.) FROM her six books of short stories Mary Lavin has made a...

MODERN poets, on the whole, make poor sub- jects for the biographer. If—in the words of Yeats- - they chose 'perfection of the work,' their lives are likely to have been as...

Made to Last. By John Kenneth Galbraith. (Hamish Hamilton, 16s.) PROFESSOR GALBRAITH is far from being my favourite economist, but in this little book he shows some surprising...

By RONALD HINGLEY p ustuart's letters* have never appeared in English before, and some readers may be Puzzled to find that a commodity labelled `Russian' can be quite so...

Who Live in Mexico

The Death of Artemio Cruz. By Carlos Fuentes. (Collins, 21s,) Daily Life of the Aztecs. By Jacques Soustelle. (Pelican, 7s. 6d.) THE first two books tell the story of a Mexican...

Some Faces in the Crowd. By Budd Schulberg. (Bodley Head, 16s.) Teeth, Dying and other matters. By Richard G. Stern. (MacGibbon and Kee, 30s.) THERE'S a story, possibly...

Insurance Investment and the State By NICHOLAS DAVENPORT THE parts of the City most anxiously awaiting the October election result are the board rooms of the life insurance...

The Advertising Man. By Jeremy Tunstall. (Chapman and Hall, 30s.) Anvp.ansiNG is on the defensive. It has its self- appointed apologists, but their arguments are s uspect and...

By CUSTOS T HE 'no-change' Bank rate, which appears to he Mr. Maudling's pre-election policy, stead- ied the gilt-edged market, though it remains friendless. It is worth...

By LOTHBURY T HE results from Great Universal Stores are really outstanding, with a 14} per cent in- crease in the trading profit at £351 million. This is the biggest increase...

Al Fresco By LESLIE ADRIAN THE open-air restaurant, like the open-air cinema, is foreign to British cities. For the reason, one has only to review the uneven history of the...

This Other Eden By STRIX The noises made by aircraft get louder and louder, causing distress to more and more people. Skylines bristle with architectural eyesores. Rivers are...

By ALAN BRIEN ON August Bank Holiday Monday, our car suddenly stopped moving in a centre lane of a one-way street somewhere in the Willes- den wilderness. The mood of...