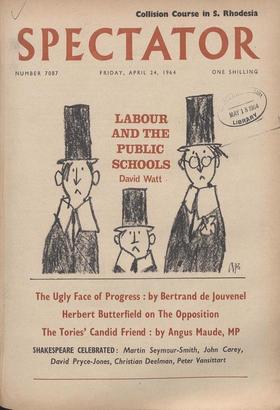 LABOUR AND THE PUBLIC SCHOOLS

NORMAL PROCESSES OF CONSULTATION AGAIN: the Commonwealth Prime Ministers' Conference was announced for July 8 to 15. Southern Rhodesia's presence or absence was much debated,...

A LL parties in this country, and all shades of opinibn within those parties, unite at least on one aspect of the grave problem in Southern Rhodesia. They want to see a peaceful...

The Ugly Face of Progress

From BERTRAND DE JOUVENEL PARIS DROGRESS means continuous growth of the r social patrimony, a successive increase in the assets handed on by each generation of fathers to the...

Labour and the Public Schools By DAVID WATT IIOULD a Labour Government reform the Opublic schools gradually, or abolish them, or let them stew in their own juice? The...

P RESIDENT KENNEDY'S Civil Rights Bill, the most substantial of his domestic legacies to President Johnson, seems certain now to pass the Congress before July, having survived...

Federation on the Brink

By KEITH KYLE I F the East African Common Market vanishes in the next few weeks, we shall have to write off the chances of East African political federa- tion for years to...

Lord Kilmuir as the Candid Friend

By ANGUS MAUDE, MP But of all plagues, good Heaven, thy wrath can send, Save, save, oh! save me from the Candid Friend! "Vitus Canning. And thus, with much indigna- tion, the...

Farm Subsidies Out of Control

â¢ By JACK DONALDSON L sT May Mr. Christopher Soames announced that, with a view to stabilising the food market, he intended to negotiate restrictive agreements with overseas...

When we reached Harrogate we plunged at Â°nee into an immensely serious and enjoyable conference. The speakers included a bishop and a dean, as well as more orthodox lay...

Civic pride is a splendid thing, and their magistrates' verdict on Cain's Book must bring some balm to the burghers of Sheffield. It may have been said of them that their police...

It is the oddity With every other commodity. It takes its turn and turn about And first is in and then is outâ Which Chancellors callâto cover both A moderating rate of...

Has any Royal Commission, I wonder, ever been given a more difficult task than that which, it is announced, is to inquire into crime and punishment? `To re-examine the concepts...

At first sight, Mr. Selwyn Lloyd, Leader of the House of Commons, will be in a position over these next three months that makes him the envy of all his predecessors. He will...

Something for Everyone The great wave of Shakespeariana is now

upon us. I bow to the Bard with the rest, but I hope this quatercentenary deluge is not about to make him seem the great bore which innumerable reluctantly-heeded English...

Several references to this new Royal Com- mission, I see, describe it as the first full study of our penal system since the Gladstone com- mittee reported in 1895. Mr. Henry...

credulity, I don't think there has been a bigger hoax than the case of the alleged Hiroshima pilot, Major Eatherly. Cele- brated in a poem by Mr. John Wain, by liberal crusaders...

By HENRY FAIRLIE I F you want to know what humbug isâhum- bug stewed and preserved in its own juiceâ you will follow me through the first leading article in The Times of...

The Boom in Bardolatry

By CHRISTIAN DEELMAN TRATFORD-UPON-AVON is a tawdry, grasping place, redeemed by pockets of worthwhile scholarly and theatrical activity. Though brew- ing and a few other...

By RANDOLPH S. CHURCHILL ARE we becoming a nation of 'softies'? Mr. Richard Kelley, Labour MP for the Don Valley, urges in a press statement that all professional footballers...

SIR,âI fear that I have not yet had the opportunity of reading Ludovic Kennedy's book on the trial of Stephen Ward but, as one who was daily present in court, I was deeply...

SIR,âMr. Pienaar, in his defence of apartheid, challenges me to reply to two questions. 1 am glad to be able to try. (1) Of course many attacks on apartheid are based on...

Sia,âMr, Randolph Churchill is guilty of philo- logical inexactitudeâif he will pardon the phraseâ in a column commendably dedicated to putting other reporters right. Why...

Not Asking Questions Apartheid and the Press The Stephen Ward Trial F. H. A niphlett Micklewright, P. R. Mursell An Edge of Pride B. S. Johnson Purposely on Purpose Miss...

SIR,âMr. Leigh Vance is welcome to criticise the law, lawyers,

Mr. Henry Fairlie, and anything else which is unfortunate enough to provoke his dis- approval. But uninformed criticism is apt to make the critic look ridiculous. Mr. Vance...

NOT ASKING QUESTIONS Murray Kempton in his article 'Waiting for

the Verdict on Oswald' (April 10) says that 'The Kennedy murder is full of puzzles; yet our journalists look at them with a languor and an an xiety not to ask questions which...

SIR,âMy Kenyan grandfather, who died in 1880. amused the irreverent â  oung by using the word 'purpose' when informing his family of an intention. 'I purpose to' do such and...

aggrieved that our recent Occasional Paper. Monopoly or Choice in Health Services, included substantial extracts from his article in Medical Care which inadvertently launched...

AN EDGE OF PRIDE

SIR,âMr. Deane Narayn speaks glibly of 'our culture' in his curious objection last week to my review of his novel An Edge of Pride, as though Britain and America were one....

All the World's a Producer

By DAVID PRYCE-ZONES Richard II and Henry IV, 1 and 2. (Stratford-upon- Avon.) â Timon of Athens. (Chichester Fes- tival Theatre.) 'IT follows that it is im- possible to...

AFTE RTHOUGHT someone else has not already done so, I should

like to inform Mr. Alan Brien that his inter- , pretation of the lines quoted from Sonnet 135, at the end of his article, is not original. He has been f orestalled by Dr....

THE LANGUAGE OF THEOLOGIANS

SIR,â Can any of your clerical readers explain why t heologians intending to tell their readers that the Preamble to a discourse, though capable of expan- s ions, should be...

AN ANNIVERSARY trust it is not presuming too much upon

your editorial courtesy to use the excuse of my seventieth birthday today to request the hospitality of your columns for this letter. Today's anniversary reminds me of many...

After the Chaos and Darkness

By CHRISTOPIIER BOOKER 'WELL.' as the wags had it on Tuesday morning. 'there hasn't beer. anything like it on television since before John Logie Baird.' The old joke that they...

The Silence. (Cameo- Royal and Continentale; `X' certificate.) Few reputations have soared as fast, then plum- meted as far, as Ingmar Bergman's. The 'he-is-with- Shakespeare'...

Slap in the Face

All things considered, then, the Sadler's Wells management had a good prima-facie case for doing Volpone on their own account. Conducted by Leon Lovett, directed by Michael...

By TERENCE BENDIXSON Architects engaged in designing other univer- sities are either doing variations on the York approach or sticking to bricks and mortar. At York, Robert...

Dividing the House By HERBERT BUTTERFIELD W ITH the passage of time, the historian moves, as Bacon once said the scientists ought to move, to the analysis of ordinary...

By MARTIN SE YMOUR-SMITH S HAKESPEARE studies in the first half of this century have tended to follow three main lines. First, there are the critics and scholars who have...

THOSE intrepid people who travel to wild, in- hospitable places and then write books about the perils they have passed there are often re- ferred to as examples of the...

Tocqueville and England. By Seymour Drescher. (Harvard/O.U.P., 48s.) ENGLAND was to Frenchmen of the eighteenth and early nineteenth centuries what America has been to...

Sebastian Rides Again A Singular Man. By J. P. Donleavy. (The Bodley Head, 21s.) JUST below the grotesque comedy of The Ginger Man lay a statement of despair so individual and...

Nothing Like the Sun. By Anthony Burgess. (Heinemann, 21s.) As an anniversary celebration the unpredictable Anthony Burgess presents Shakespeare's love-life UP to 1590,...

The Line of Tory Chancellors

By NICHOLAS DAVENPORT IT is a little premature to say that the Conservatives are no longer in power, but one cannot resist looking back on the series of Tory Budgetsâall...

By CUSTOS T HE equity market, having broken through a new high level, is churning away in active dealings unable to decide whether to ignore th e October election and go...

By LOTHBURY RE-TAX profits of Dunlop Rubber well ex- r ceeded the forecast, made last October, for the second half of 1963. In fact, the overall in- crease is as much as 14.4...

Coming Up For Air By LESLIE ADRIAN WITH warmer weather and school holidays comes an annual problem for Lon- don parentsâwhere can their children play in the open air without...

By ALAN BRIEN An unopened letter is a spy on the premisesâ I'll swear that some of them tick like bombs. For this reason I like to get them outside the house as soon as...