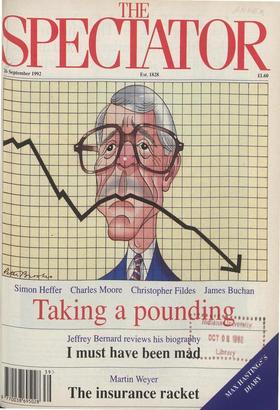 The cheque is in the post J ohn Major announced that Britain would not return to the Exchange Rate Mechanism of the European Community until it had been reformed. Mr Lamont, the...

I n the past week, we have all had cause to think a great deal about principled resig- nations, their merits or otherwise. I have heard ministers and advisers muttering about...

Hubris, nemesis and singing in the bath CHARLES MOORE M y wife said she had never heard me sing in my bath before,' said Norman Lamont, all smiles, in Washington at the...

Simon Heifer on the worst week in Mr Major's political career, and the struggle for the soul of the Tory party LIKE MANY who profess a ff ection for the works of Anthony...

THE FRENCH have been holding what they are pleased to consider the cente- nary of the Republic, the First Republic having been proclaimed on 22 Septem- ber 1792. There was a...

VICTORY FOR THE HOLLOW MEN

John Laughland argues that French voters have been duped by the scare stories of dishonest old politicians Paris ON THE DAY after the French referen- dum, Le Figaro published...

James Buchan is astonished by British criticism of the German Bundesbank THE GERMAN Bundesbank, which so signally failed to rescue Norman Lamont last week, may seem to British...

A SAD MISUSE OF INFLUENCE

Raymond Bonner argues that the British have played a dishonourable and cowardly role in Kenya Nairobi THREE YEARS after the destruction of the Berlin Wall and the fall of...

HURRICANE IN THE HIGH STREET

Martin Weyer argues that small policy-holders are being made to pay for insurance companies' mismanagement `IN THESE days of gigawatt thunder- storms, multi-megaton hurricanes...

Damian Thompson reveals the turmoil and head-rolling at the top of British Jewry A GREAT British religious institution is in trouble: unpopular with its congregations, losing...

WHAT WOULD THEY HAVE DONE?

Ludovic Kennedy denounces the critics of a doctor found guilty of attempted murder I WONDER if those who applauded the sentence on Dr Nigel Cox of a year's, sus- pended, after...

persist.. . ONE OF THE few lessons I have learnt as a doctor is that, life being what it is, things turn out badly in the end. I don't just mean death, which is bad enough, of...

ROLL UP THOSE MAPS

Two puzzling pygmies fighting a no-win election PAUL JOHNSON W ile we have been losing the battle for the pound, the French have been divid- ing themselves neatly down the...

Sir: As a farmer who has contemplated sui- cide —

on and off — for the last 25 years, I was struck by your suggestion that our ten- dency to self-destruction might be due to the large quantities of farm chemicals on our...

Sir: The Duke of Westminster's report on the countryside deserves better than your sneering editorial (12 September).. The report is not exhaustive, but it is the only present...

Sir: You have been fighting a gallant rear - guard action against Euromania. When duly verified against your doubtless abun - dant accurate archives, the following may suggest...

Sir: The economic mess into which our politicians have allowed us to fall, as well as those same politicians' nightly tergiversa - tions in front of the television cameras ,...

Sir: I suppose it was about par for the long- time Paris resident Lord Rothermere's Daily Mail to front-page-spread the 'news' that the Princess of Wales had patriotically...

Sir: The Duke of Westminster's eminent team of industrialists and

agriculturalists are more than capable of defending his report which you attacked in last week's leader, and therefore I will leave that to them. I have been a subscriber to...

Sir: While it is true that child abuse appears to be a fairly recent pastime (Letters, 5 September), I am sure it has existed since the creation of Man. It is just that it was...

Sir: In your 'Unlettered' series you used to publish examples of letters or notices from companies or public bodies which are 'crass, illiterate, ignorant, irrelevant or...

Sir: It is distressing to think of P.D. James's party of detective-story enthusiasts from the United States wandering vainly along Magdalen Bridge in search of the spot where...

Sir: Following my column on eating cheaply (Food, 29 August), 1 have received more letters than I can reply to individually. The most common enquiry is where to find various...

Sir: I am an admirer of Mr Waugh's literary accomplishments, but I hope I am not being churlish if I say that I do not find his bottom a particularly inspiring subject for...

Caroline Moore TIME AND TIDE by Edna 0' Brien Viking, £14.99, pp. 325 T he heroine of Time and Tide, briefly and disastrously in love with Duncan, `mesmeriser, drinker and...

A universe that had lost its soul

A Rolling Stone who gathers no gloss

Julie Burchill KEITH RICHARDS by Victor Bokris Hutchinson, £17.99, pp. 352 K eith Richards — 'Kee to those who love him, especially from afar — is, and always will be, the...

Mr Magoo and the peasants' revolt

Simon Courtauld WEST DOWNS: A PORTRAIT OF AN ENGLISH PREP SCHOOL by Mark Hichens Pentland Press, Durham, £18, pp. 192 T he author's description of the story of West Downs as...

Trying the manners of different nations

Your tongue shall be split

Claudia FitzHerbert THE QUEEN AND I by Sue Townsend Methuen, £9.99, pp. 239 S ue Townsend is best known for her Adrian Mole books, in which she gave a gloriously funny...

Exhibitions 1 The Art of Ancient Mexico (Hayward Gallery, till 6 December) A feast for the art parasite Tanya Harrod T he story is terribly involved and com- plicated even...

Wisdom and Compassion: the Sacred Art of Tibet (Royal Academy, till 14 December) Higher culture Giles Auty I n common with nearly all who will see the show, I had little...

Best of the new Robin Holloway T his year's Proms, as well as containing the usual wealth of familiar repertoire, have been rich in the unhackneyed and spectacular in the...

(New Theatre, Cardiff) The Force of Destiny (London Coliseum) Madly successful Rupert Christiansen I have only one substantial objection to the Welsh National Opera's...

An Inspector Calls (National) Hamlet (Riverside Studios) Medea (Almeida) Stop messing about Sheridan Morley I magine you are the literary executor of the J.B. Priestley...

Who will buy? Alistair McAlpine T he sale-rooms have changed in the last two years. The change has been a slow one, and it is hard to pinpoint any particular time when it...

Para diddle Martyn Harris L t-General Sir Michael Gray, comman- der of the Parachute Regiment, has been writing to the BBC this week to express deep concern about...

Not a pretty picture Jeffrey Bernard I shall be interested to see what the book looks like when it comes out — it is illus - trated — and then it shall be kept closed for ever...

Well oiled Taki W hen two months ago I received a letter from Emma Hanbury, a friend of long standing, asking me to a surprise party for her husband's 40th birthday in their...

Acts of friendship Nigel Nicolson T o see one's mother portrayed by an actress less than half one's age is not so weird an experience as you might imagine. This is what...

about hard times and forecast the end of the small shop. It was being forced out of business by something he referred to as an out-of-town superstore. The Saturday before, in a...

Raymond Keene T he quality of play in the Fischer- Spassky 'world chess championship' is cer- tainly not as accurate as that which we have been accustomed to see in the classic...

Ad angle Jaspistos I n Competition No. 1746 you were .invit- ed to write up to 120 words of advertising copy for an imaginary product, parodying one method of approach to the...

Celebrated centurions Frank Keating I CURSED myself for not popping over to Bristol last week to help put up the shutters on the cricket season — to have a drink with Glos for...