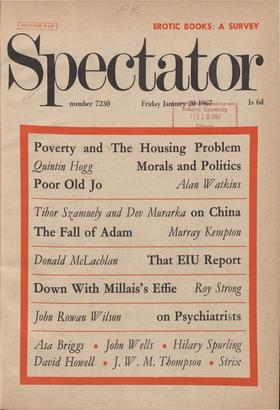 I N 1901 Charles Booth, in his mammoth study Life and Labour of the People in London, wrote that he was 'ready to accept any view, however extreme, of the in- sufficiency,...

The Tragedy of Jo Grimond

POLITICAL COMMENTARY By ALAN WATKINS T LAST spoke to Jo Grimond—it is di ffi cult to 'escape the obituarist's note—some months ago in a television studio. During the programme...

Though Prang Van Dong Says all along That Ho Chi Minh Is bound to win, Yet Mai Van Bo Would like to know If Pram Van Dong Might not be wrong. CHRISTOPHER HOLLIS

By TIBOR SZAMUELY N OT since the 'thirties, possibly not since the early days of the Bolshevik Revolution, have the professional students of Communist affairs been so...

EUROPE By MALCOLM RUTHERFORD MAKING the long way round to Paris, the Prime I Minister and Mr Brown have now been to Rome on the first stage of their European probe and found,...

CHINA — 2 From DEV MURARKA MOSCOW OMETHING has got to give. But whether it will abe Mao's Cultural Revolution or the Liu Shao-chi/Teng Hsia-ping opposition no one in Moscow...

January 19, 1867 The Queen is to open Parliament herself. —"with the same state," says the Times, "as last year." Does this mean that she will not read the Speech herself? We...

M R Duncan Sandys's latest little exploit as Shadow Leader of the Opposition was an oddly implausible event. Perhaps the Conserva- tives are destined to become the minority...

THE PRESS By DONALD McLACHLAN H AVING chided some managements (notably the Daily Telegraph) and praised others (notably the Sunday Times and the Daily Mirror newspapers), the...

The Most Urgent Reform of All

By DAVID HOWELL, MP E DWARD HEATH made an interesting speech recently on the theme of 'the open society.' What did he mean? According to Mr Heath, the administrative processes...

The Fall of Adam AMERICA

From MURRAY KEMPTON WASHINGTON A ND so the golden apples of the sun have withered for Adam Clayton Powell, the only negro in American politics who possessed and thoroughly...

By QUINTIN HOGG, MP The trouble about him has always been that he remains the eternal dilettante. He has neithef the philosophic equipment necessary to sys- tematise his ideas,...

How to Choose Your Psychiatrist

CONSUMER'S GUIDE TO THE PROFESSIONS-5 By JOHN ROWAN WILSON W HEN I was a medical student, psychiatrists, like whisky, came in three main flavours— Scotch, Irish and imported....

AFTERTHOUGHT By JOHN WELLS gloomy topics as air pol- lution and the Death of the Earth, I found Dr Leakey's revelations on Sunday about the twenty million years that separate...

SIR,—As viewed from Vietnam several conclusions which Mr Lawson has drawn on the bombings of North Vietnam ('Spectator's Notebook,' December 30), appear in a different light. I...

SIR,--I think one could take David Rogers's argu- ment 'Plowden Misses the Point' (January 13) a stage further. The point is that child-orientated and subject-orientated...

The Path from Rome SIR, It is sad to see

an intelligent and responsible paper like the SPECTATOR following the current Roman lapidation craze to the extent of publishing pathetic little accusations from schoolboys. To...

Sot,—I have read Mr Waugh's article (December 23), and, above

all, the answers to it, with great interest. Anglicans have written of the horror and surprise kith which they read a Roman Catholic's proyoca- tively exaggerated, but...

Israel I would like to express my emphatic agreement with Simon Raven's dictum (January 6): 'While it is true that the Jewish race has been savagely persecuted through- out...

Snt,—As an Anglican, a student of ecumenism, with special reference

to the Roman Catholic Church, an admirer of Evelyn Waugh and an avid reader of SPECTATOR, may I say that having perused Auberon Waugh's 'Christmas Sermon' I begin to wonder if...

The Tiny World of John Osborne SIR,—In the course of

The Future of the Private Sector SIR,—My great respect for

Nicholas Davenport and his writing makes me all the more exasperated that he seems to have allowed himself to become obsessed with what he evidently believes to be my heretical...

No Short Answer SIR,—Penelope Houston gave a brisk and comical

survey of the short film battlefield in `No Short Answer' (December 23). To those of us scrabbling in the mud it had a sprightly detachment reminiscent of those captains' ladies...

SIR, —Anthony Burgess, in 'Dickens Loud and Clear' (December 23), uses the expression 'camp.' What does the word mean exactly, and how and when did it come into use? I should be...

SIR,—I was delighted, as indeed many of my col- leagues must have been, to read Leslie Adrian's dental article (January 13). I fear, however, that either Mr Adrian was...

What Is This Thing Called Froth?

THEATRE By HILARY SPURLING is a horrid age we live in,' as Thomas Otway Take, for example, The Soldier's Fortune at the Royal Court last week. Amid all the warmth of praise...

ART By ROY STRONG T REMEMBER once, after a lecture on Henry VIII, a member of the audience sprang to her feet, shook a menacing finger at a portrait of Anne Boleyn and cried...

By BRYAN ROBERTSON ONCENTRATED in the Petit Palais, Picasso's V ./ range of sculptural ideas disrupt any pre- conceived notions of twentieth-century sculpture as a whole: for...

Pretty Snazzy Number By PENELOPE HOUSTON ABOUT a third of the way through Un Homme et une Femme comes a sequence in which a test driver takes a sports car hurtling around a...

Hen By ANTHONY BURGESS ALCOLM LOWRY's Under the Volcano is a novel about the last day in the life of Geoffrey Firmin, British consul of the Mexican town of Quauhnahuac, which...

DURING a period when liquidity and exchange rates have forced themselves into the homes of millions during the peak viewing hours, a read- able guide to these issues deserves a...

Mao and the Warlords

Au. my adult life Catullus has been my favourite poet in any language. Not, of course, the greatest. But the one who has most to say to me. The miraculous survival of his works...

Querelle of Brest. By Jean Genet. (Blonji, 30s.) `EvEurruiNo within me turns worshipper.' In Jean Genet's works there is always this note of adoration. Even the graffiti which...

By MARTIN SEYMOUR-SMITH F ROM a serious writer's point of view there should be no censorship at all. If there is any, he has to ignore it : he must feel free to express himself...

VEE ECOKOMW A UNE allni By NICHOLAS DAVENPORT PHE private sector, I have said, has a more I subtle enemy than the doctrinaire or Marxist socialist. He is the reformer who...

By JOHN BULL It is worth drawing up a balance sheet. On the credit side Imperial Tobacco has gained valuable evidence of the damage that abandonment of price maintenance would...

On the Carpet CONSUMING INTEREST

By LESLIE ADRIAN As carpets always figure in the sales, I thought I would pass on a timely collection of tips from one of London's oldest dealers in floor cover- ings,...

By CUSTOS E VERY Thursday is Bank rate day with the promise of a cut to at least 63 per cent. With interest rates falling in America, with the German Bank rate cut from 5 to 43...

.11PLAPEN By STRIX A N old friend, who won the Military Cross as a young officer in the First War and was later appointed a Knight Grand Cross of the Royal Victorian Order...