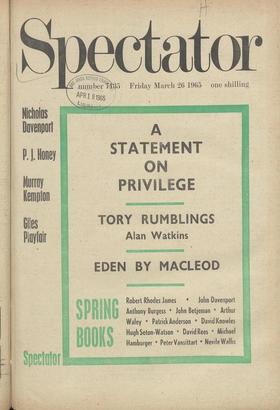 T will be known to our readers that the IHouse of Commons has this week de- bated a suggestion that the Spectator had committed a breach of Parliamentary Privilege: and that...

Portrait of the Week— NOT PERHAPS AN ORPINGTON, but for

the Liberals something just as cheering. The party gained Roxburgh and Selkirk with a majority of over 4,000, while the Labour and Independent Scottish Nationalist candidates...

The Way Ahead for Housing A. J. MERRETT Come Dancing HILARY SPURLINO John Mortimer on Simenon One year's subscription to the 'Spectator' costs f3 5s. (including postage) by...

Honest Doubt There lives more faith in honest doubt, Believe me, than in half the creeds. T HERE are many reminders one would like to place on Mr. George Brown's desk. e...

LEO BARON writes from Bulawayo: Mr. Bottomley's statement at the conclusion of his visit to Rhodesia was a masterpiece of diplomacy; it could be interpreted almost at will...

A procession of ducklings led by Mother Duck crosses the television screen in animated cartoon. One duckling detaches itself and embarks on a tour of adventure; Mother Duck...

Christopher Robin had four little foxes Who paid up their fares in the 'honesty' boxes. They went to the station and got on the trainscs Which flew like a bomb and as right as...

CHRISTOPHER BOOKER writes : 'I like the Daily Mail because . . .'. So begin entries for the current Daily Mail competition for a 'Star Prize' of £250—part of a circulation-...

From MURRAY KEMPTON NEW YORK T 0 1 -9 1-1E National Association of Broadcasters still gathers every spring in Washington, even though the ceremony is less pleasant than it...

Tory Rumblings By ALAN WATKINS H ow much longer can Sir Alec Douglas- Home continue as leader of the Conservative Party? After the loss of Roxburgh the question does not...

At first sight there may be some sympathy with Mr. thimond's complaint that only one Liberal member has been selected to serve on the Scottish Standing Committee to discuss the...

'Gas,' as everybody knew and as everybody has repeated, is a very emotive word, 'napalm' slightly less so. Napalm, as anyone who reads the news - papers must have known, has...

One swallow of course does not make a spring election. All the same the results of two countY council elections last Saturday at Potters Bar In my constituency are an...

Quite an Assumption Mr. Crossman has evidently firmly turned down

the plea made in the Milner Holland report for an end to the treatment of London's housing prob- lems as 'the sport of political prejudice.' He has, for example, rejected that...

j WYNNE WALTERS had already looked twice at his watch. The Scots (clearly the better side throughout the match) were swarming near the English line. I was saying suitable things...

Denis Howell, Minister responsible for Sport, was at the match. He was telling me something of the plans for staging next year's World Cup. The main arena, naturally enough, is...

By GILES PLAYFAIR (-NUR prisons may or may not have become too kf'soft,' but there still isn't one—closed, semi- closed or open—which is the equal of its most advanced...

By OLGA FRANKLIN EADING the Russian newspapers every day, 1‘ I have become obsessed with how alike we are..1 mean, a Briton could live in Russia today and hardly notice the...

By 1AIN MACLEOD T ins volume,* the last to be written and the second in period of time, is the best of the three, and that is high praise. The years of apprenticeship are...

Silt,—Last week's correspondence page gave us a second unfair and irrelevant reply to Rabbi S. Warshaw. He is now accused not only of emotion bordering on fanaticism, but also...

SIR,—Students of the casual enormity will have been delighted by Quoodle's cheeky revelation of the way he refreshed himself with Milton—`a chance re-reading of Paradise Lost'...

am sorry that Brian Crozier ended a con- structive review of some Chatham House books in your issue of March 12 by a rather generalised sneer at 'recent staff appointments' and...

SIR,—Mr. Harry Cohen, who challenges my assess- ment of some of Chambers's evidence, does not seem to be well acquainted with the history of the Hiss case. 1 pointed out that...

Siit,--Mr. Collingwood August is an embittered man; the letters in

your columns last week must both in- crease and explain his bitterness. Miss Rose Miller says that the Chinese, like the British, despise foreigners. The Chinese. however, as...

SIR,—Referring to your footnote to Mr. Mark Goulden's letter (Spectator, March 12), would it not have been better to let your readers form their own opinion'? Admittedly, Mr....

SIR,—It is of course difficult to say whether the anti-

German sentiments expressed by Mr. Mark Goulden are shared by many people in this country. For the sake of 'British greatness,' and bearing in mind that this country did not...

Sit,—May I appeal to your readers for letters ing with colonial or kindred subjects which the,■ , have received from my late husband, Arthur Creech Jones, ex-MP for Wakefield...

SIR,—At the bottom of the page, and with no big headlines, I read in the 'Times Educational Sup- plement last December that the government of Ghana had set up a committee to...

The Press and Vietnam

SIR,—While I agree with Christopher Booker that newspapers should devote more space to what is actually happening in Vietnam, he should recognise fairly what newspapers have...

SIR,—In your issue of March 5, Custos writes that the merger between the Bank of West Africa Ltd. and the Standard Bank Ltd. will produce 'the biggest bank in Africa.'...

Stn,—The article in your issue of March 12 on 'The Revolutionaries' calls for considerable correction. Your contributor Mr. Martin Seymour-Smith affirms, for instance, that...

SIR,—Christopher Booker's opinions on the press are not worth bothering

about, but his factual in- accuracies arc becoming intolerable. In your issue of March 19, he complained that 'only three national dailies appear even to have a man of their own...

W HEN John Raymond revived interest five years ago in the intellectual and political currents of thought in the Baldwin Age, my chapter in his symposium dwelt on the lively...

'THE usherette, a sympathetic soul who had I seen two of her fellow-usherettes carted out of the cinema, unable to stand it, treated me rather as if I were going in for an...

W HY form a ballet company? There must be easier, if not quicker, ways of losing hair, sleep and money. For the sad truth is that there are always enough ballet companies in...

By ROBERT RHODES JAMES P is often remarked that the British fi nd a Icompulsive fascination in the contemplation of their great military and diplomatic defeats and are even...

Vive Moi ! An autobiography by Sean O'Faolain. (Hart-Davis, 42s.) THE Irish have a genius for autobiography. Mr. O'Faolain, quoting Henry James, confesses that he is writing...

What Now in the Novel?

BY ANTHONY BURGESS e HE future of the novel? Poor old novel, it's T in a rather dirty, messy tight corner. And it's either got to get over the wall or knock a hole through it....

Sermons from Heart and Head

By JOHN BETJEMAN rrHE author of these twenty sermons* is Dean 1 of Trinity College, Cambridge, in whose chapel he preached most of them. He was a scholar of that college before...

Commissioner Lin and the Opium War. By Hsin-pao Chang. (Harvard/O.U.P., 56s.) THIS is No. 18 of the Harvard East Asian Series. As the title indicates, it is not an account of...

THERE has been a good deal of odd and even puritanical carping at Life with Picasso, by Frangpise Gilot and Carlton Lake (Nelson, 35s.), which seems all the more noteworthy for...

THIS might be described as an edition for the literate of a coffee-table book. There are a number of essays by English-speaking Renais- sance scholars of what may be called the...

A Tale of Two Monsters

By HUGH SETON-WATSON 'THERE is a vast literature on the relations be- tween the Russian and German governments in the last hundred years. The story of alliances and conflicts,...

More Equal than Others

ORWELL is always with us and Mr. Thomas's book in the 'Writers and Critics' series is a concise, valuable study which offers new insights into Orwell's life and work. Perhaps...

On the highway Three nuns passed me Doing eighty. Three nuns like Burned croquettes, in a Pale blue Ford sailed Past. Say, sisters Is it okay to break Laws temporal, if...

Snared in the rustling sheath of winter, Neck high in March, not yet remembering Water-notes near the nape attentive, How like a swan the narcissus opens. Slow the ascent,...

From Hegel to Nietzsche: The Revolution in Nineteenth-Century Thought. By Karl Lowith. • Translated by David E. Green. (Constable, 55s.) MR. HOLLINGDALE claims that 'there is...

(from 'E=MC 2 ,' a sequence) Private time, public time— By my love I measure my time By your love you measure your time By our love we measure our time. Content, we assuming...

Budget Advice-1 By NICHOLAS DAVENPORT EI VERY citizen is entitled, of course, to give ad- vice to Mr. Callaghan on how to frame his April budget, but 1 do resent it coming...

Good Food Scout LESLIE ADRIAN IF the Chancellor of the Exchequer carries out his threat to put a squeeze on expense-account entertain- ing in the budget, the effect on the...

By CUSTOS 'Thu: upward bound in equity share prices at the I start of the new Stock Exchange account, which will just cover the budget, was largely a technical affair. The...

By ALAN BRIEN UNTIL I was eighteen, Newcastle was my metro- restaurants which were open after 6 p.m., for fast through trains to London or Edinburgh, for con- tacts with...

By MARY HOLLAND Goodness knows how I had forgotten it. If any- one had asked, I would have listed the game of rugby as an intrinsic factor of my youth, as in- escapable as the...