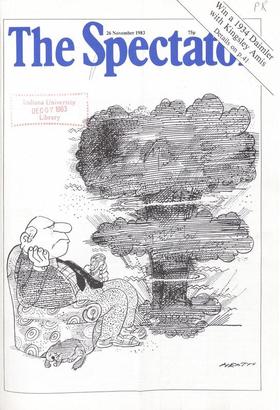 The Browning version Charles Moore 'Meyer glad confident morning again,' said Paul Johnson, and Mrs Thatcher fled to India. But was the morning ever all that confident or...

M r Graham Walton, the father of the Liverpool sextuplets, has shown en- viable cheerfulness in the face of the terrify- ing domestic upheaval which he now faces. Has he thought...

Timothy Garton Ash recently in Warsaw T he Spectator is a small, barely legible magazine. It measures about six inches by four and contains some 130 hand-cut pages of smudged...

Christopher Hitchens I n 1955, the year that the Greek Cypriots began their revolt against the British oc- cupation, Charles Foley was editor of the Times of Cyprus. In his...

This week's question, set by Kingsley Amis, is to be found on page 41.

James Hughes-Onslow t is a little known fact that Harold Holt, It Australian Prime Minister who disap- peared while swimming in 1967, had a lesser misfortune three years...

Simon Courtauld Madrid inurin g the first weeks of the Civil War, in the hills of the Sierra Morena, a village priest was taken from his church to the local bull-ring. A bull...

Andrew Brown Belfast T he day after the Armagh murders I stopped to buy some cigarettes in a peaceful bohemian part of town. The shopkeeper, a healthy-looking bespectacled man...

Mr Shaw Lefevre should look still more narrowly into the proposal of the Metropolitan Railway to connect Praed Street with Westminster. The line would be invaluable, if it could...

The making of a Monsignor

Pearson Phillips e's got a speaking engagement at -11..Yarrow,' said Monsignor Bruce Kent's secretary, who is called Judy. Yarrow? Where's that? 'In the North-East,...

Nicholas von Hoffman Washington T n 1863 a force of Confederate irregulars 'under William Quantrill captured Lawrence, Kansas, burned it and put its in- habitants to the sword....

The day after that

Paul Johnson However, the real money-spinning gim- mick in this particular TV show was that, though billed under the category of 'Theatre', it was also what American TV men...

Mr Lawson lays it on the line Jock Bruce-Gardyne T he other day, in the run-up to the Chancellor's autumn statement, 1 was asked to talk to a conference organised by a leading...

Sir: One does not have to be a sycophantic admirer of the Archbishop of Canterbury to find the article on him by A. N. Wilson (`Doing the Lambeth walk', 12 November) extremely...

Taking the Tablet Sir: When Auberon Waugh reopened the pages

of the Tablet (12 November), he seems to have hoped to revisit Brideshead . What a disappointment! And then he struck a snide review of the biographY of his own grandfather,...

Waugh on want Sir: Auberon Waugh believes he has found a new means of identifying political subver- sives — apparently they have a tendency to abbreviate their Christian names....

Sir: I am a longtime admirer of the Spectator and

a cover-to-cover reader. I do not expect to agree with everything that appears in it, indeed I hold that in a civilised society a difference of opinion adds to the spice of...

pen on a point which has concerned me for a long time. It has always struck me as unfair that someone with a prestigious address but mundane name should get away with having...

Sir: Listening to a radio programme about the great and growing problem of youth unemployment, an elegant scheme presented itself to me, and one which I think might recommend...

Sir: Like Auberon Waugh (12 November), I read the Tablet

religiously when Douglas Woodruff was the editor. It then had a splendid masthead motto. It deserves capitals: 'PRO ECCLESIA DEI, PRO REGINA, ET PRO PATRIA'. What better...

Sir: You write (Notebook, I October) that Sir Ernest Debenham, the department store magnate, bequeathed his collection of Korean and Chinese ceramics to the Victoria and Albert...

A policeman's lot Colin Welch I f I were Sir Kenneth Newman, Com- missioner of the Metropolitan Police, I would not thank my predecessor, Sir David McNee, for his poisoned...

Christopher Hawtree Required Writing Philip Larkin (Faber & Faber £4.95) f I seem good, it's because everyone else is so bad,' Philip Larkin once observ- ed. 'Well, almost...

John Stewart Collis The Human Body Jonathan Miller and David Pelham (Cape £7.95) D r Jonathan Miller, the author of this book, is a man of parts, though not a man apart. The...

William Camp F.E. Smith, First Earl of Birkenhead John Campbell (Jonathan Cape £30) c onsidering that he was the cleverest and most fascinating public man of his time, it is...

AMONG THIS WEEK'S CONTRIBUTORS

William Camp is the author of The Glittering Prizes, a life of F.E. Smith. Francis King's most recent novel, Act of Darkness, was published earlier this year. Caroline...

Francis King Woman Beware Woman Emma Tennant (Jonathan Cape £7.95) A s its title, echoing that of a tragedy by Middleton, would suggest, this short, allusive, packed novel is...

Of Tuareg and Aboriginals

Dog days Peter Ackroyd Cujo (`18', selected cinemas) S tephen King must take the primary responsibility for Cujo, since he wrote it. His novels have often been successful in...

Watcher John McEwen Reg Butler (Tate Gallery till 15 January 1984) w hen Reg Butler died at the age of 68 in October 1981, plans were already underfoot for him to have a show...

Points of view Peter Phillips T he Great British Music Festival has now presented three of its six concerts in this its first ever season, and a second round for next year was...

Show business Taki New York A rabella Pollen is a 22-year-old English girl who, like everyone else these days, designs clothes for women. Although I'm a friend of hers, I was...

Devil-worship Richard Ingrams I it possible that the BBC's God Slot on 'Sunday has now been replaced by a Devil Slot? The question occurred to me while watching a documentary...

Favourites Jeffrey Bernard t's been a particularly soft and unin- teresting week. So I shall have to diver- sify. Firstly, foremost and most awful, John Le Mesurier died....

All Saints' P.J. Kavanagh ?The otherwise admirable Miles Kin g ton 1 came up with a rum radio pro g ramme to mark All Saints' Day and I have been ponderin g it, off and on,...

Jaspistos reports: Competitors were asked for a poem or a piece of prose putting the case that the Devil is female. The Devil is a woman. How the devil do I know? A woman's...

A prize of len pounds will be awarded for the first correct solution opened on 12 December. Entries to: Crossword 635, The Spectator, 56 Doughty Street, London WC1N 21.1. 1...

If you missed the previous weeks' issues, it is still possible to enter the competition. Back numbers arc available from: The Spectator, Competition Back Numbers, 56 Doughty...

The first prize is a magnificent 1934 'hinder Saloon, which is illustrated above. It is fully licensed and in excellent condition having had only two owners. The car is valued...

with Dame Edna Everage Hello Possums! When I first began my miracle career, the front rank of Melbourne's top drama -critics in describing me invariably used the adverb:...

F ollowing the decision of the Bundestag in Bonn to allow the siting of American Pershing 2 missiles in West Ger- many, Russia walked out of the arms con- trol negotiations with...