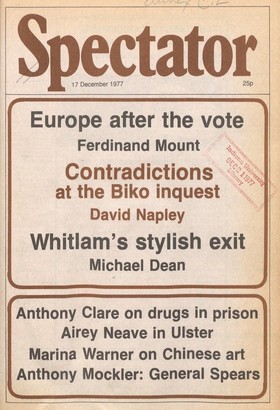 On Monday, despite a few objections from MPs and the taking of a vote which allowed eighty-two of them to register their dissent (largely over defence spending), the House of...

Farewell to the feds Ferdinand Mount Normally you can tell they are posing. The exchanged chuckles, the finger directing an aide's attention to a significant passage in the...

Last week Thomas Szasz was in London. Not surprisingly, on the day that most of our papers decided that the naming of Princess Anne's baby was the main news story, his visit was...

State of the working class Auberon Waugh Stung by criticism in the correspondence column of this newspaper, where a Mr Holly of Torquay complained that I lived in an ivory...

Michael Dean Whatever his faults Gough Whitlam was never a bore. When he emerged from his long, painful vigil last weekend to concede defeat in the Australian elections and...

Harold Pateshall Sydney The pathetic trickle of Vietnamese refugees now managing to reach Australia in small boats is something this country has not encountered before, and it...

Anthony Mockler 1977 has been a good year for monarchy — Jubilee celebrations in Britain, consolidation in Spain. And the year ended in a blaze of glory with the disappearance...

David Napley When it became known that I had been invited by the Association of Law Societies. of South Africa to attend the Biko inquest as an independent observer, some of my...

Simon Macnab Beirut Approached from the sea, Beirut comes up out of its smog like any other Western city, with the inevitable skyscrapers and the forest of television aerials...

Edwin Hoyt With the future of the US Pacific Fleet's base at Pearl Harbour ultimately at stake, a running battle has developed here between the United States Navy and a small...

The drugging of prisoners

Anthony Clare There has beetteo.nsiderable publicity given recently to the fact that large numbers of individuals in British prisons are receiving psychiatric drugs. This...

Airey Neave Last week under the leaden skies of Ulster, I felt for the first time that the terrorists were in trouble. Even in South Armagh and the hard areas of Belfast and...

Patrick Cosgrave 'Who is she?', Violet Asquith asked her brother at a ball in 1906, when Clementine Hozier came into the room. The question, Violet wrote in her memoirs (when,...

The City's big battalions Nicholas Davenport A correspondent writes to tell me that he is giving up trying to look after his own portfolio of investments because he finds it...

'No' to new regions

Sir: I was disappointed to read Mr George Gale's article (3 December), arguing for the abolition of county councils and the institutioo of new large regional councils. It seems...

Sir: John Biffen's interesting article 'Underestimating Mr Benn' (26 November) makes the point that the aforementioned Tony Benn should not be treated as 'an irrational hate...

Sir; How many times is Keynes, like Cromwell, to be exhumed, quartered, and anathematised whilst his achievements are ignored? I only ask because whereas Mr Mount (3 December)...

Sir: I cannot agree with your reviewer of 26 November that my late mother, Angela Thirkell, had 'a stone of a heart'. This has become a smart and fashionable thing to say among...

Sir: The disagreement between myself and the chairman of the Association for the Teaching of the Social Sciences (Letters, I December) is confined, I think, to whether the...

Christopher Booker The Serpent and the Nightingale Cecil Parrott (Faber £7.50) The other Sunday morning I tuned in to Radio Three just in time to catch the beginning of a...

Simon Blow Lermontov Laurence Kelly (Constable 26.50) It is strange that, with so much contemporary reference, Mikhail Lermontov's A Hero of Our Time has not, in these cultish...

Stuart Morgan Passages In Modern Sculpture Rosalind E. Krauss (Thames and Hudson £9.50) The man next door has been giving me funny looks lately. I suspect that he wants to talk...

Peter Ackroyd A Pebble From Rome R.T. Plumb (Duckworth £4.95) Advertisements for cocoa and sliced bread have already wrapped us in the warm glow of the 'thin ies and 'forties,...

Benny Green Whether or not the true English vice is social embarrassment, it certainly provides a comfortable meal-ticket for the professional English humorist. Year after year...

Geoffrey Wheatcroft Last year 'The Arts in Hard Times'; this year 'Value for Money': the Arts Council's annual reports have nowadays a defensive, diffident tone. There is no...

Harmonies in nature Marina Warner Chinese Painting of the Ch'ing Dynasty (1644-1912) British Museum till 15 January At the Canton Trade Fair, towards the end of Mao's...

Rough-up Ted Whitehead A Bit of Rough (Soho Poly) Sexual Perversity In Chicago (Regent) On the way to Gully Fraser's A Bit o f Rough, my companion said that he thought 'all...

Kind of horror Clancy Sigal Rollercoaster (Empire after 26 December) Hyena's Sun (Minema) One of the frustrations of being a movie critic is the way we are seduced into...

Naturals Richard Ingrams The mysterious Mr Ronald Eyre finally came to the end of his long search. on Monday night after three years and 150,000 miles of travel round the...

Bad habits Jeffrey Bernard Whatever National Hunt racing may lack in class it certainly makes up tor in sheer spectacle and with the friendliness of its patrons. Last Saturday...