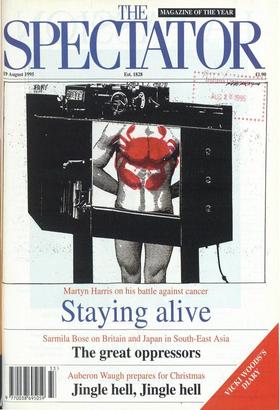 VJ Day. M r Bill Morris, the secretary of the Transport and General Workers' Union, joined a small chorus of criticism of the style and lack of clear policy of Mr Tony Blair,...

VICKI WOODS I forget which Tory MP it was who issued the elitist call, earlier this year, for Latin and Greek to be routinely taught in all British schools. But his...

Time to start thinking about Christmas AUBERON WAUGH T here is a desperation in Britain at the present time. We see it in every newspaper, every magazine, every radio and...

THIS IS NOT THE TIME TO DIE

When he fell ill a few months ago, The Spectator asked Marlyn Harris to describe what it is like to have cancer Here is his response THE SCENE is by Woody Allen — from Annie...

We secretly approve of ethnic cleansing in Croatia, writes Anne McElvoy, even if we do not admit it to ourselves Zagreb FOUR YEARS ago, in the Serbian enclave of Knin, I came...

I HAVEN'T quite finished reading the new Concise Oxford Dictionary but I have found some of its advice on usage sweetly avuncular (or should I say materteral, since the editrix...

ENOUGH GUILT FOR EVERYONE

The British demand apologies for Japanese atrocities, writes Sarmila Bose, but never examine their own misconduct in Asia FOR A COUNTRY commemorating vic- tory in the second...

THERE IS only one condition less suit- able for mankind than slavery and that, of course, is freedom. The main differ- ence between the two conditions is that under slavery it...

For the man who plays tough guy to Tony Blair's nice guy, by-election bullying is nothing new, writes Nicholas Jones AT the private party following his victory in last year's...

Hold my mortarboard, will you, while I put the boot in? PAUL JOHNSON A word of protest about the cult of gra- tuitous rudeness. Let me be quite clear what I mean. A certain...

Eligible to receive a whinger's charter guess who pays the bill CHRISTOPHER FILDES I hope that the Eligible Life will see me through. It is 172 years older than I am, but may...

Sir: Charles Moore's claim (Another voice 29 July) that General Sir Michael Rose was, in effect, a defender of the Bosnian Serbs is incorrect and unsubstantiated. Whatever...

Bosnian Waugh Sir: Jasper Elgood's gentle reply (Letters, 12 August) to Auberon Waugh is fine so far as it goes, but it does not deal with the basic failure of understanding...

Sir: Some ingredient over and above mere reliability is needed before there will be a significant transfer of passenger traffic from car to train (Leader, 7 August). The glamour...

Sir: Simon Courtauld's on-going romance with Spanish sailors (`The Spanish are dif- ferent', 29 July) is getting beyond a joke Off he trots to the fish market in Vigo, nerve...

Free and easy as one's discourse Bevis Hillier THE OXFORD BOOK OF LETTERS edited by Frank and Anita Kermode Oxford, £20, pp. 559 I n the first volume of his memoirs, Infants...

The voice of God

Andrew Barrow EXCITING TIMES IN THE ACCOUNTS DEPARTMENT by Paul Vaughan Sinclair-Stevenson, £17.99, pp. 237 A lot of people will never have heard of Paul Vaughan, but almost...

Their judgment is a mere lottery

Charles Saumarez Smith CULTURE AND CONSENSUS by Robert Hewison Methuen, £20, pp. 366 ARTS AND CULTURES: THE HISTORY OF 50 YEARS OF THE ARTS COUNCIL OF GREAT BRITAIN by Andrew...

A Bohemian at heart

John Grigg THE GREAT AND THE GOOD: A LIFE OF LORD RADCLIFFE by Edmund Heward Barry Rose, £25, pp. 264 C il Radcliffe, like Oliver Franks, was an intellectual who became a...

I spoke to his unknown betrayer

Sibylla Jane Flower THE RAILWAY MAN by Eric Lomax Cape, £15.99, pp. 276 E ric Lomax discovered in the years after his release from Japanese captivity that there is no statute...

Turkish but no delight

Philip Glazebrook THE BLACK BOOK by Orhan Pamuk Faber, £14.99, pp. 400 I n so far as this sprawl of a novel is a nar- rative at all it tells the story of a Turkish lawyer's...

Every picture made to sell a story?

John McEwen EDWARD HOPPER AND THE AMERICAN IMAGINATION compiled by Deborah Lyons and Adam D. Weinberg Norton/Whitney, £30, pp. 252 I t is fashionable to get novelists rather...

Exhibitions Making and Meaning: Turner and the Fighting Temeraire (National Gallery, till 1 October) Turner in Germany (Tate Gallery, till 10 September) Examining a rather...

Die Hard with a Vengeance ('15', selected cinemas) Could try harder Mark Steyn M ovies have been around 100 years now, and, as with the State Opening of Par- liament, they've...

Springing back Alan Judd G iven the number of bad backs amongst the population and the time we spend in cars, it is lamentable that manu- facturers have not, over the years,...

Ian, you were fab Nigella Lawson ne day I shall, almost certainly, be offered my own witty, intellectually probing late-night television talk show and I shall expect Ian...

Trouble with wimmin Taki T his is supposed to be the silly season, which is why I guess my friend Graydon Carter, the editor of Vanity Fair, decided to run a silly piece by...

Only one way to relax Jeffrey Bernard h ere is something very gloomy to me at this time of year about the seasonal overlap of cricket and football. For one thing it heralds...

The state of my nose Carole Morin hen you go into a bathroom in Germany,' my grandfather used to say, 'you're guaranteed to find it spotless.' Grandfather Money fought on the...

Action in August Nigel Nicolson I t is fortunate that a sheep requires ten times more living-space than a man, and that it takes 100 acres of wheat to feed a battalion....

The young lead Andrew Robson WHILST the British Open Team finished a disappointing 14th (out of 32) in the recent European Championships, our Junior team has just won the...

A matter of mouth chemistry Auberon Waugh T he only real sorrow in this business comes with the suspicion that one has over- praised a wine. The panel should act as a...

VERY MANY thanks to all those who sent me various beetroot soup receipts. The Polish name is chlodnik and I think it is pronounced in the same way as the Welsh pronounce their...

RA liS,LE OF JURA - SSUI U MO101141 COMPETITION Anacreontic a la mode Jaspistos IN COMPETITION NO. 1894 you were invited to supply a drinking song for women. Sir Thomas...

1795 Raymond Keene THIS MONTH we are celebrating not just the centenary of the Hastings 1895 compe- tition, arguably the strongest chess tourna- ment ever held on British...

Late Bottled Vintage 1988 Port for the first correct solution opened on 4 September, with two runners-up prizes'of £15 (or, for UK solvers, the latest edition of The Chambers...

Football's rebel Simon Barnes IT IS A little-known fact that the working title for Edvard Munch's most famous Painting was 'The Start of the Football Sea- son'; his agent...

Dear Mary. . . Q. We have a frequent visitor who stays for several weeks a year. Our problem is that he arrives equipped with a portable com- puter and printer, fax machine and...