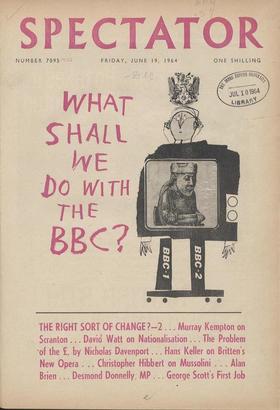 â Portrait of the Week

A WEEK OF DESPERATE ACTION: at the eleventh hour Governor Scranton challenged Senator Gold- water for the Republican nomination, and was begrudgingly supported by Mr. Nixon and...

What Shall We Do with the BBC ?

T HE introduction of commercial tele- vision to this country was only half a revolution. Indeed its effects, considering that television would have expanded over the last few...

WILLIAM DEAN writes : It is not easy to extract any useful meaning from the results of last Sunday's 'elections' in Czechoslovakia. Nor is it easy to understand what sort of...

Second Chance for the Congo?

K Erni KyLe writes : In a Leopoldville which has just gone through an uncomfortable wave of plastic bombing and sabotage, a major step is being attempted towards bringing order...

News from No-Man's-Land By DAVID WATT I T is one of Colonel George Wigg's political dicta that 'trench raids, like kit inspections, are good for morale.' The Conservative...

The Polite World of William Scranton

From MURRAY KEMPTON NEW YORK 'THERE had not. until three weeks ago, seemed 1 any reasonable way that Senator Goldwater could be the Republican nominee for President. There has...

BY CHRISTOPHER HOLLIS The really important thing is to speak frankly. toughly, if need be, and not to blur issues by diplo- matic obscurities or by slogans.âMR. HAROLD...

Next week in this series Angus Maude, M.P., will write

The Right Sort of Change?-2

PLANNING FOR COMPETITION `Affluence . . . is the indispensable objective' By GEOFFREY HOWE `C OME say that when the economy is growing, when the riches of the people are...

By DESMOND DONNELLY, MP rr HE Foreign Minister said, 'Britain has to I learn to win the friendship of the Arabs. She has three interests in the Middle Eastâoil, trade and...

DURING his recent visit among the lawyers Mr. rrn Wilson announced that law reform would be given pride of place in the first session of legislation if his party was returned...

Come to the Fair

As one of the features of the World Book Fair, it was good to see that this week T. S. Eliot was asked to award the 1964 Geoffrey Faber Memorial Prize for poetry. Not exactly a...

How Long is Life?

The Rivonia trial seemed to prove many things, some of, them almost inconvenient to those who protested in advance. Judge de Wet is not a stooge of the South African Govern-...

Who's a Tory Now?

There are many other unobjectionable and non- party suggestions: the Court of Criminal Appeal should be upgraded to become a division of the Court of Appeal, no one should serve...

Safe and Respectable By GEORGE SCOTT Y ou bite your nails,' said the bank manager. He was not asking me, he was telling me. 'We can't have anyone working in the bank who bites...

Ask Ernie Appendix 4 of the report on ,Road Pricing,

published by the Ministry of Transport, opens thus: Consider a road network in which a parking tax of ti per p.c.u. is imposed on every journey, â¢ non-parking traffic being...

I return briefly to the subject of 'personal hygiene.' So many correspondents have written to me to say that my advice to rinse the hands whenever possible after defecation is...

Obituary notices in The Times may seem at first sight an unlikely medium for party politics. Little did I know. In the issue of June 4 E. W. writes of Sir Henry Spencer, of...

Coloured News By RANDOLPH S. CHURCHILL L AST week I pointed out how the Illustrated London News had beaten its stable com- panion, the Sunday Times, with the first coloured...

Sta,âOpera has always bedevilled the policies of the Arts Council,

as Sir Alan Herbert has recently pointed out. Is this florid, melodramatic art, alien to England, always to be encouraged at the expense of our literary arts? Without being...

SIR,âII is curious that' Mr. Randolph Churchill is able to

tell your readers in detail how many reporters the Sunday Times sent to Aberdeen and other places to cover the typhoid story. But he is unable to tell them for certain whether...

SIR,âBy an error the bibliography was left out of the early copies of Norman Lewis's The Honoured Society, reviewed in your columns by Sylvia Sprigge. I would be grateful if I...

SIR.âMr. Basil Davidson has some true things to say about British policy in Central Africa. But his theme is decorated, unfortunately, with a number of patronising...

SIR,âlain Macleod was lucky to have a batman who knew his Bernard Shaw so well as to recall from Arms and the Man: You can always tell an old soldier by the inside of his...

SIR,âMr. David Watt, your political correspon- dent, is not quite

right when he suggests that 'none of. Mr. Wilson's famous working groups has been set to consider the problems of public ownership (except, marginally, some of those concerned...

SIR,--I would like to endorse Sir Herbert Broadley's view that

we should build upon the immense good- will and understanding which has been generated by the Freedom from Hunger Campaign during the last two or three years (Spectator:May -...

By DAVID PRYCE-JONES The Master Builder. (National Theatre.) There can be few who will dispute the merits of the repertoire system. Freed from the pressure to give the public...

Sta,âI am mystified by the reference to me which Mr. Alan Brien makes in the Spectator of June 5. He reminiscesâand 1 quote himâ`about the eight Lord Beaverbrook flambded...

By HANS KELLAR My title, as always, is try- ing to make a point (which is why I'm getting fed up with papers that refuse one the right to one's own title). Everybody, including...

Here he is producing ingenious and tasteful variations of his abstract forms, patterns and pointillist spots belonging to stages of his past. They have a demonstrative air, as...

BATH is an ideal town for a festivalâit looks as if it has been carved out complete from one block of stone, a chunk of gracious living, eroding a little round the edges, but...

The World of Henry Orient. (Odeon,Leicester Square, 'A' certificate). SELLERS'S virtuosity is one of the facts of film-making and it would come as no surprise to find him play-...

Fallen Idol By CHRISTOPHER HIBBERT P rowARDs the end of his life, while playing I. his last pathetic role as the humiliated and Powerless President of the Salo Republic,...

On from the Webbs

Hemingway : The Writer as Artist. By Carlos FRATERNAL reminiscence seems to be getting to be a genre in its own right. John Faulkner has next to nothing to tell us about his...

THIS book is one of a new group which replaces an earlier and familiar series. The volume whose place it takes was the work of the late Professor Z. N. Brooke, and his son tells...

The View from Steamco Point. By Charles Johnston. (Collins, 25s.) AT first sight this is rather a bad book. There is an irritating quality of superior facetiousness which...

FROM Hull Grammar School (where Andrew Marvell had his First Thoughts in a Garden), Young Linton Andrews won a scholarship to Christ's Hospital, where he appears to have been...

The Problem of the By NICHOLAS DAVENPORT The main â¢ rumour is that the conservative European gold powers won a resounding victory over the liberal Anglo-Saxonsâno doubt in...

By LOTHBURY I N a very full report to shareholders for the year ended December 28, 1963, Sir Kenneth Peacock, chairman of Guest Keen and Nettle- fold, makes quite clear the...

By CUSTOS T HE new account on the Stock Exchange brought a better tone in the equity share markets and continued weakness in the gilt- edged. This was attributed to the...

Signs of Approval By LESLIE ADRIAN IF customers feel that they are being treated high- handedly when a store refuses to allow clothes, for example, to be taken freely on...

By MARY HOLLAND HAVE one antique in my life, a pretty, curvy, little sofa, covered in aqua- marine satin, with arms and legs of what I take to be rosewood. It was given to me...

By ALAN BRIEN The only two people I knew in the BBC were Donald. Baverstock and Michael Peacock and so into print they went as the golden boys of a decade hence. The time limit...