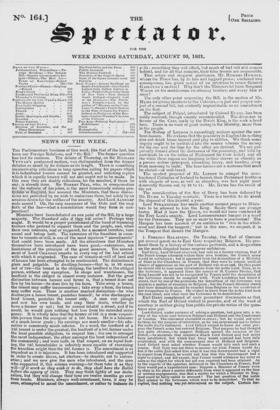 THE Parliamentary business of this week, like that of the last, has been our Foreign Relations, and "the Bill." The former question has lost its raciness. The debate of...

The discussions on the Address to the Throne from the

Depu- ties of France, had, on Monday, nearly terminated in a set-to be- tween the Ministers and their opponents. The President of the Council having ascended the tribune with a...

Last week, we brought down the history of the squabble

in Bel- gium to the defeat, or rather to the running away, on the 10th, of General DAINE ; and we noticed in the postscript to our second edition, a report by the correspondent...

• We are still without intelligence of importance from Poland.

Allthat we know is, that the Poles put a brave face on ; and if their-circumstances be dangerous, they do not aggravate them by fainthearted anticipations. The Emperor NICHOLAS...

THE KIND AND HIS COI:MT.—The retired Emperor of Brazil and

his amiable spouse paid a visit to the King and Queen at Windsor on Mon- day, pour prendre wage previous to proceeding to Paris. Their Majes- ties gave a splendid collation on...

the Yeomanry Regulation Bill. It propeses " that the arms

of the several corps should be lodged in district depots, instead of remaining in the possession of the individual members ; that the separate corps should be formed into...

"According to the best calculation that can be made respecting

the Lord Chan- cellor's business, his Lordship cannot reach his Bankrupt Petition paper until Mon- day next, when he will sit at eleven o'clock on bankrupt petitions ; and no...

THE Con.ONAT/ON.—Those who by former usage were entitled to take

part in the Coronation processions from Westminster Hall, but whose attendance is dispensed with at the ensuing ceremony, are to receive per- sonal tickets of admission to the...

mons, in punishment of the brawlers who had been thundering

so long in that famed chapel. The lightning was so vivid, and the rain so thick, that even Croker's wit was outshone and Sugden's oratory out. pattered. The Opposition were...

REvOLuTt ON AT L nit.—A gentleman landed here on Pride

yeven ing from the brigantine (!ourier, from Limo; bound to London, with about 250,000 daarson board on merchants' account ; from whom we learn that a revolu- tion had taken...

GOODWOOD RACES.—These sports have not been graced by the presence

of Royalty as was anticipated. His Majesty excused himself on ac- count of the arrival of the Duke of Saxe Meiningen. Great was the disappointment. Tuesday. August 16. The...

On Saturday last, the Rev.R. Bligh, B.D. Fellow of St. JOhn's College, Cam- bridge, was instituted to the Rectory of Cocklield, Suffolk, on the presentation of the Master and...

Auo. 20.--The Rev. F. A. Dawson, M.A. of Brasennose College, and Curate of Bicester, is appointed, by the Very Rev. the Archdeacon, a Surrogate for the grant' sag of Marriage...

Arrived. In the Downs, Aug. 19th, Nancy, Pryce, from New South Wales. In the - Channel, Royal Sovereign, Thompson ; Columbian, Brown ; and Samuel Brown, Read; from the...

THE WEATHER.—The temperature has been decidedly lower since the thunder-storm of Wednesday ; the atmosphere has been clearer, and the air more elastic and bracing. Last night,...

STOCK EXCHANGE, FRIDAY EVENING.—There has been but little variety of prices, and no remarkable excitement, in the course of the week. This day, the Consol Market opened flat at...

FROM THE LONDON GAZETTES,

THE DIVISION OF COUNTIES, AND " THE TIMES" NEWSPAPER. WE are not the only part of the reading and writing public which the very unexpected stand made by the Times on the...

Having, for the reasons mentioned at the outset, considered this

matter at so considerable length, as connected with the Times, we shall now, as briefly as possible, consider the objections .to the division clause. The whole of them may be...

THE POST-OFFICE AND THE PRESS.

AFrEn our -free remarks, last week, on the Post-Office arrange- ments for the transmission of newspapers to the country, it be- comes a point of honour with us to state, that...

WE have quoted elsewhere an edifying conversation between the LORD CHANCELLOR and Sir EDWARD SUGDEN, on the determi- nation of the former to get through the business of his...

DR. BOWEING'S Report on the Public Accounts of France has been in our possession two or three weeks, during which Ice have occasionally turned over its ample pages.* Into the...

Ws have often expressed our opinion of the importance of these provincial meetings as connected with the advancement of our national taste. London is the school in which our...

NOVELTIES OF THE ENGLISH OPERA.

TRULY the English Opera is possessed. Its green-room has become a Pandemonium. Lucifer is star of the ascendant. Every season develops some new attribute or appearance of the...

STATE OF THE OPERA C0NCERT-R00)1.—In addition to the suggestions which

we threw out last week respecting the future management of the King's Theatre, we wish to add a word upon one of its branches, which needs, and will repay, revision and reform....

Cnorataa.—At Riga this dreadful disease has nearly ceased. It has

broken out at Vienna, but it excites little fear them The people are well fed and lodged ; and the cholera is a great respecter of respectable people.

We have received a pamphlet by Captain WOODLEY, in answer

to some observations on 'this (Captain WOODLEY'S) System of the Universe." We are unlucky in never having before heard of the said system. We perceive, from the pages before us,...

The Reverend Mr. BLoom's Pulpit Oratory in the Time of

James the First is not exactly what its titlepage would pretend. It is, in fact, the publication for the first time of a volume of rural discourses, preached in that reign by a...

Mr. SALMON, the author of a valuable treatise on the

diseases .of the Rectum, has published an additional volume on Prolaprus Ani. The cases are not calculated for public discussion, but the value of these works is such, that we...

POLITICAL CARICATURES. IN nothing has the progress of refinement been more remarkable than in the improved temper and point of the weapons of satire. Those of the old warfare...

The Twenty-third Number of the Family Library is a Family

Tour through South Holland. It appears to have occupied seven persons twenty-eight days, and to have cost one hundred and thirty-eight pounds. The party were home to dinner,...

Love, a poem, by the author of the very clever

Rhymes on the Corn-Laws, is a sounding composition. It reads as if the author thumped the table at the end of every energetic verse. But it is far too vague and grand for our...

Both the works under the head of Fiction this week,

are pictures a Red Indian life by American writers. The Last of the Mohicans is a well-known and admirable view of the principles which guided and the feelings which animated...

TO THE EDITOR OF THE SPECTATOR. 8th August 1931. Sin—" Hydrophobia" is another name for death in its most appalling form: medicine cannot alleviate its terrors, much less...

MOSCHELES. Mr. MOSCHELES occasionally stoops to the composition of pieces which are intended to meet a temporary demand, and to confer a very epheme- ral reputation. To this...

"David's Lament for Absalom ;" a Cantata. The Poetry by BARRY CORNWALL, Esq. ; the Music by the Chevalier NEITHOM111. Our best thanks are due to the Chevalier NEUROBIPS for the...

Via. ADAM LEE, of the Office of Works for Westminster, has recently opened, at the Gallery of the Society of Water Colour Painters, in Pall Wall East, a Cosmoramic Exhibition of...

SINGULAR LAIW-RIRD:-.-A lady of the Russian Court, in the reign

of Catherine the Second, kept a slave, who was her perruquier, shut up in a cage in her own chamber. She let him out every day to arrange her bead-dress, and locked him up again...

Chevalier NE UHOHM. This beautiful air was written for Madame &melt - mums . . We re- commend it to the attention of such lady singers as may be desirous of possessing a...

MARSHALL. MS is an improvement upon the last ballad of Mrs. MARSHALL Which fell under our notice : the passages are not new, but they are pleasingly arranged.