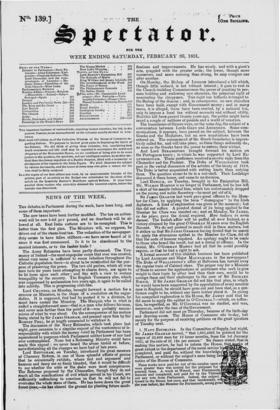 led, in the present Number, to an encroachment on the columns usually devoted to Lite- rature. Next week will inform us of the Collective Wisdom of the House of Commons re-...

THE debates in Parliament during the week, have been long, and some of them important. The new taxes have been further modified. The tax on cotton- wool will be now 5-8d. per...

The Polish question remains in nearly the same state as

it did last week. The -Russians have entered the Polish territory in se- veral divisions ; but up to the latest dates, no rencontre bad taken place. The Poles are wisely...

Hours of Adjournment-The House sat on Monday till a quarter

before two on Tuesday till half-past one ; and on Wednesday Ulla quarter before nine'till Friday, and rose at half-past one, to sit again to.day from twelve o'clock to six to...

The Belgians have now received, in the plainest and most

posi- tive terms, a refusal from Louis PHILIP mid his Ministry to allow the Duke of NEMOURS to be their Sovereign. The next best plan would perhaps have been to appoint the...

The late riots in Paris have led to an event

which the people of France have earnestly called for during the last three or four months. The intention of the King to dissolve the present Chambers was announced on...

It is now stated, that Duke CHARLES, the Ex-Monarch of

Brunswick, has given up all intention of returning to .theDuchy ; and that his brother will remain, in consequence, in undisturbed possession.

The private letters from Lisbon had described an insurrectionary movement

as intended for the 8th instant ; and the ramifications of the conspiracy against the beloved MIGUEL were said to be extensive. Two decrees of that Prince, dated the 9th,...

in the Mo! denese territories, in the legation of Bologna, of Ferrara, in the States RI provisionally assigned to MAA LOUISA, Parma and Pia- cenza, in Ancona, Urbino, and Lucca....

THE KING AND ins Couur.—The Royal party left Brighton for

Lon- don on Al( achy morning. The Brighton people are loud in their ex- pressions of regret; and, mingled with some little selfishness, we do not doubt that in their regret...

Some disturbances, which one of the London journals has con-

verted into a rebellion, have occurred in the county of Meath. It appears that a number of people had assembled at Kells and Nobbor, whose object was to procure a reduction of...

It may be recollected, that when MINA some time ago

made his abortive attempt on the Northern frontier of Spain, a diver- sion was talked of as intended to be made by General TORRIJOS at Gibraltar. A diversion, or rather a...

LONDON UsuvEnsiTy.—The annual meeting of proprietors was held on Wednesday

her of burgesses only, could not be held to deprive

the inhabitant house- The only complaint to which the deceased, Mrs. Lloyd, had been sub- holders, rated and paying scot and lot, of their elective franchise. The ject previous...

afterwards. Nothing that we applied could increase the danger. When

Mr. Vance came, I described to him correctly the treatment I had used. At one time,'a slight hope was entertained that her life would be preserved. I administered internally...

VESTRIS'S LEns.—Thomas Papera was indicted on Tuesday for steal- ing.

a variety of casts in plaster of Paris, value 2s. Gd., the property of James 3lillest Papera and partner. The principal article alleged to be stolen was a cast of Madame...

THE DUKE OF WELLINGTON.—Last Saturday afternoon as tbe Duke of

Wellington was riding on horseback in Oxford Street, the florse stumbled, threw his Grace with great violence on the ground, and then fell upon him. Fortunately, though the...

INVIOLABILITY OF TIIE ORIGINAL PURPOSES OF A COMPANY:

A bill was filed to restrain the Manchester Canal Navigation Company from applvine. to Parliament for an Act to convert the Maechester, Bolton and Bury Canal, into a rail or a...

CAMBRIDGE. February 25.-At a congregation on Wednesday last the following degrees were conferred :-Honorary Master of Arts-Lord E. A. C. B. Bruce, Trinity College, son of the...

BIRTHS. Lady WILLIAM MONTAGU, of a son. On the 21st inst. in Longhorn Place, the lady of GEORGE PALMER, Esq. of a daughter. At Brighton, the Honourable Mrs. ANDERsoN, of a son....

SPECTATOR OFFICE, SATURDAY, Two o'CLoca. Accounts have been received from Brussels of the ,election of M. SURLOT DE CHOKIER as Regent. The official accounts from Alrarsaw are...

STOCK EXCHANGE, FRIDAY EvENrco.-Tbe calm of last week has been suc- ceeded by very stormy weather, and severe losses to the adventurous Bulls, who then bought Stock at and above...

THE KALENDS OF MARCH.

As was to have been expected, the article on Reform in the extra- ordinary number of the Quarterly Review has created a sensation of grief and alarm throughout the country. The...

WILL probably be thrown out by the House of Commons,

or, at all events, so frittered away as to become wholly inefficient. We heard the debate on the noble Lord's motion for leave to bring in the bill ; and, to speak frankly, we...

THE ADVERTISEMENTS OF THE WEEK.

WE are great readers of advertisements :the columns of the Times or Morning Herald, when crowded with them, form a kind of in- dex of life. Imagine the parties brought together,...

THE FORCE OF NAMES;

IN speaking last week of the Game-Laws, we referred to the delusion kept up by the remains of feudality connected with them: If sporting were not considered a gentleman's...

THE King and the Queen have been to Drury Lane ; and the presence of their Majesties seems—to judge by the newspaper criticisms—to have conferred new brilliancy on the School...

MR. CONSTABLE'S LANDSCAPES. "JOHN, bring me my umbrella—I'm going to see Mr. Cawnstable's pictur," said old FUSEL' to his servant; and the sarcasm was compli- mentary; for, if...

How gradually and steadily has the German school of vocal music been diffusing itself over our concerts! Its pace, though slow, has been sure: every advance has been maintained,...

WE have at length heard Madame VESPERMANN. Of a surety M. LAPORTE must imagine his subscribers the most - easy and contented of human beings, or he never would have introduced...

ANNIVERSARY ON THE GEOLOGICAL SOCIETY.

The Anniversary Meeting of this Society was held at its apartments; in Somerset House, on the morning of Friday, the 18th inst., for the purpose of electing officers for the...

Songs for the Grave and the Gay. The Poetry written and the Melodies selected by T. H. BAYLY. When a volume of music is presented to us, with a smart and enticing exterior, and...

Tuis is a most complete and. compact plan of London, and very elegant in its appearance, being surrounded with eighteen well-executed views of public buildilgs. Its size is only...

"The Knight of the Silver Shield." By S. NELSON. "Thou hast a white Arabian Steed." By A. BETTS. The merit which attaches to these songs is of a negative kind: they are not...

"To the Spirit of my Mother ;" a Canzonet. By

J. M. HARRIS. We have seldom met with an air in which the spirit of the poetry is more completely transfused into the music, than the present. The filial reverence of the son...

"Or che niuno ;" Duetto for Soprano and Tenor. By

W. 11., HoLmEs. There is not much originality in this duet ; but the passages are vocal and pleasing, and the arrangement is creditable to so young a composer as Mr. HOLMES.

THE French are oracles of dress, and therefore a work illustrative of the costumes of the fashionable world comes with proper grace, and bearing the stamp of authority, from a...

THE Illustrations to the first volume of Kenilworth, forming Volume XXII. of the new edition of the Waverley Novels, are by Mr. LESLIE; and we are glad that they afford us the...

MR. COUZENS has just finished two new mezzotint portraits from LAWRENCE, of Miss Macdonald and Mrs. Wolff. The former is, with- - .out exception, the most brilliant specimen of...

"The March through the Town ;"' a Song. Composed by'S.

NELSON. We place this song by itself, in order to notice the very cool effrontery with which certain soi-disant composers appropriate the property o -others. This composition...