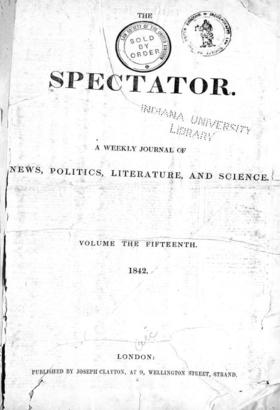 Louis PHILIPPE'S speech on opening the Chambers, on Monday last ; and the declaration of the Paris journalists against the con- viction of M. DUPOTY. The speech is generally...

It is announced that Lord ASHBURTON is to proceed to

America, in a few weeks, on a special mission to the United States, to negotiate a settlement of differences between the Republic and England. The Standard says that his special...

Tins New-Year's Day finds a greater change in public affairs than any of its predecessors for some time. Although many subjects of discussion are unaltered in name, their...

Addresses to Lord Melbourne, from Derby and Melbourne, were presented on Monday last, at Melbourne Hall, the Viscount's seat. They were carried up in a joint procession from the...

The Gresham Committee received, on Friday, the report of the Sub- Committee respecting the arrangements for laying the first stone of the Royal Exchange. The ceremony is fixed...

THE country life of the Court at Windsor presents no incidents. The Queen has walked and ridden out, and Prince Albert has been out shooting. The Queen has been sitting to Mr....

From the United States we have the President's message on

the opening of Congress. Mr. TYLER may now be pronounced, with- out question, to have sent to Congress the worst-written message which that august body has ever received from...

The Queen's County has refused to address. Lord De Grey ! On Wednesday last, "the Tory nobility, clergy, gentry, and freeholders," met at Maryborough, agreeably to requisition...

We have heard that her Majesty has already announced to the proper authorities that it is her intention to open the ensuing session of Par- liament in person with a Speech from...

We understand that Mr. Thomas Carlyle has declined becoming a candidat^ for the chair of History, now vacant in the University of Edinburgh. Mr. Carlyle has communicated this...

In the number just issued of a statistical periodical, Facts

and Figures, it is stated in a leading article that "The Government are, we are as- sured, making a modification of the Corn-laws, and a low tariff on a broad scale." It is to...

Tke pressure upon our space has compelled the omission of

The Dorset Chronicle contains an account of Sir James Graham's

visit to his constituents, on Tuesday last : they gave him a dinner, and he made them a speech. The speech was mostly devoted to a quiz of Lord John Russell's reply to the...

The Times of this morning publishes "the final and revised

statement of E. B. Smith to the Treasury ": Mr. Smith says— " That he was introduced so long back as 1820 to Rapallo, Solari, and one or two of their associates. That soon...

SATURDAY NIGHT. We have heard that it is the intention of Ministers, on the meeting of Parliament, to propose some alterations in the existing Poor-law Bill : the precise...

"lie believes the total amount fabricated to be about 340,0C31.

; but is doubtful whether a sum of 40,000/. is or is not included in this total. "lie still maintains that this whole amount has been wasted, from time to time, in gambling...

The New York papers notice with strong approval the appointment

of Mr. John Quincy Adams to be Chairman of the Committee of Congress on Foreign Relations, in the room of Mr. Cashing. The change is one of considerable importance. Mr. Adams's...

STOCK EXCHANGE, FRIDAT AFTERNOoN. Connected in point of time with a rumour that our Government were about to demand satisfaction of the United States for the detention and...

The Paris papers of Thursday announce the election of the

Secre- taries to the Chamber of Deputies—MM. Galas, Boissy d'Anglas, de l'Espee ' and Havers. The two former are Ministerial but the elec- tion of Secretaries is not considered...

The Madrid Gazette of the 23d contains a circular, pointing

out to the authorities that the law of October 1837 permits the suspension of any journal, if the Magistrates have a reason for thinking the public tranquillity in danger, and...

A Treasury minute was published in last night's Gazette regulating

the rates of certain foreign postages. Its substance is conveyed in the annexed schedule- " Between any ports in Madeira and the Canary Islands, or between any port in Madeira...

THE opening of Drury Lane, on Monday, was an inspiriting sight to the playgoer : the friends of the Drama seemed to have rallied round Old Drury to hail the return of...

The Haymarket has paid homage to the holyday-season by pro-

ducing a fairy spectacle. The World of Dreams, or the Man in the Moon, is pretty and amusing of its kind ; though, compared with the displays at the great houses, it is as a...

NEW-YEAR'S DAY. NEW-TEAR'S DAY is arrayed in what "the melancholy Jaques" was ambitious .4 "a motley coat." It is typical at once of sameness and change. It is one of those...

The Covent Garden pantomime, Harlequin Guy Earl of Warwick, or

the Dun Cow, is remarkable for the beautiful scenery of its opening ; which, in lien of separate scenes suddenly changed, exhibits a conti- nuous succession of views in a moving...

The great feature of the Adelphi pantomime, The Little Old

Woman and her Pig, or Harlequin Pedlar and the Magic Petticoat, is the " real water "; the introduction of which is detrimental to the real fun. The tank is opened in two...

SINCE the Whigs were ejected from office, Lord Jour; RUSSELL has received an address and promulgated an answer. Lord PAL- minim:on has gone through the same ceremony. Lord...

AT this carnival season sports are the order of the day, and ever/- grown men may be indulged occasionally in a game at "follow my leader." On this account, we are not disposed...

Tun existence of a free press is at stake in France. A very short lime will show whether LOUIS PHILIPPE 15 to succeed in an attempt which cost CHARLES Dix his throne. It is by...

NIMROD'S occupation's gone. The days of high fences, broad ditches, and deep country, are passing away. Hunting, like every- thing else, is to be "taken easily." Sir Roger de...

FRANCE just at present exhibits some of the advantages of govern- ment concentration,—which upon the whole we need not envy her,—in the maturing of a broad and comprehensive...

TO THE EDITOR OF THE SPECTATOR. Clapham New Park, Surrey, 28th December 1841. DEAR Sta—The Spectator of the 25th instant contains an article on "Death Punishments," in which...

Pouvrost, Eamon:, The Philosophy of Necessity; or the Law of Consequences, as applicable to Mental. Moral, and Social Science. By Charles Bray. In two volumes. Vol. II. Part...

Amiotron a continuation, prompted by the success of the first, this Second Series of Visits to Remarkable Places has the rare good fortune of equalling if not excelling its...

THE contents of this handsome volume originally appeared in the New Monthly Magazine; they are now republished, with illustra- tions by PICKEN, and as reasonable a degree of...

BOOKS. Notes of a Traveller on the Social and Political State of France, Prussia, Switzerland, Daly, and other parts of Europe, during the present Cen- tury. By SAMUEL Lama,...

BIRTHS. On the 19th December. at the Relief Manse, Kelso, Roxburghshire, Mrs. Jeavne, of a daughter. On the 224, in George Street. Lady CARMICHAEL Arssmoveza, of a daughter....