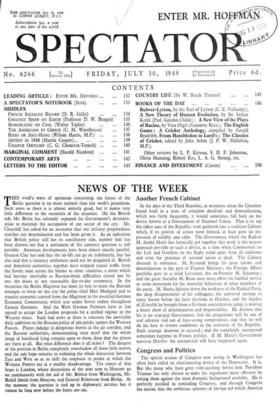 NEWS OF THE WEEK T HIS week's wave of optimism concerning

the future of the Berlin question is no more rational than last week's pessimism. Such news as there is is almost entirely good, but it makes very little difference to the...

The special session of Congress now sitting in Washington has often been called an electioneering device of the Democrats. It is. But like many who have gone vote-catching...

In the days of the Third Republic, at moments when the Chamber found itself in a state of complete deadlock and demoralisation, which was fairly frequently, it would sometimes...

Mr. Wilson chose the hottest day of the year to present us with more clothes, but we can wear the gift with fortitude. The new clothes ration concessions are welcome in...

Justices of the Peace

" The Law," for most people who are unlucky enough to have a brush with it, means a policeman and a bench of voluntary magistrates. Over ninety per cent, of all charges in this...

The World Health Organisation has taken two years to come into existence. Its constitution was drawn up in June, 5946 ; but States were slow in paying contributions and...

In the palt few weeks this country has had the pleasure of welcoming both the Australian Prime Minister, Mr. Chifley, and his Minister for External Affairs, Mr. Evatt. It would...

It is clear from the 28th Annual Report of the Forestry Commis- sioners that the first complete year of the post-war forestry pro- gramme, which ended on September 30th, 1947,...

Only one thing really matters about the transfer of Covent Garden to the State: will it improve the standard of performance ? Mr. Jay Pomeroy, who was the Government's only...

It is essential to discover at once whether this was a true or false picture of the actual state of affairs in Paris. And it can be said at once that the disturbing account in...

At a gait too dignified to be called a scurry,

yet definitely more precipitate than a glide, a large section of Their Majesties' guests at last week's Garden Party began with one accord to make their way to a corner of the...

A WIDE range of epithets has been used to describe the behaviour of the Russian authorities in Berlin, but if I had to plump for a single word to define its salient...

Three of us landed the other day at a major

British airport with a few shillings'-worth of unexpended foreign currency in our pockets. The official who changed it for us wanted to know—in order to record on a form—the...

I can't believe that I am the only man in

the country who finds something mildly nauseating in the Switch Family Robinson, the imaginary family who figure in the Central Electricity Board's latest advertisements. " I...

By the time you read these words the Fourteenth Olympiad

The man who writes to me from Birmingham gets angrier

and angrier. " I ask Lords, Dukes and other rich men for money, just for a £r note privately enclosed. But I get exactly nothing ! " he complains. " That Betty Grable crowd in...

By D. W. • BROGAN HE greatest show on earth." So P. T. Barnum called his circus. And the national conventions of the Republican and Democratic parties suggested the circus...

By WALTER TAPLIN T HERE is something symbolic -in the act of thinking about coal in a heat-wave. It shows our predicament in a flash. We now have to consider in detail, with...

By C. M. WOODHOUSE T HE American sport of twisting the lion's tail has long since given way to the more serious business of taking the lion's share. This important change for...

By WILSON HARRIS, M.P. T HE Criminal Justice Bill is now an Act. As it was introduced in the House of Commons, and got its second reading last November without a division, it...

By MARTIN COOPER A GREAT deal has already been written about the revolutions of 1848, and it is by no means yet certain that 1948 will not prove a more decisive year in...

By C. G. CHENEVIX-TRENCH S WIFTLY and irrevocably the States of princely India are passing into the night. The contours of most of them are already obscured ; only the loftiest...

By HAROLD NICOLSON I AM not among those who contend that the law is a ass ; on the contrary, I revere its majesty, obey its dictates and enjoy its quillets. I agree with Plato...

FROM end to end of the bright, airy ward, From end to end of each delirious day, The wireless whined or hammered, nagged or roared ; That was the pain no drugs could put away....

THE Proms. are with us again, familiar and friendly, orchestral music in its most typically English setting. For six weeks the music is the thing, and the brilliance of Signor X...

Ste, Many readers of The Spectator will have been disturbed by „the story of the abduction of children from Greece into neighbouring countries. Some may have seen the Appeal to...

THE ROYAL Sta,—Mr. Walston's reflections on the Royal Show at York seem to do less than justice to the organisers and exhibitors. If it were true as he suggests that the...

Sta,—My husband returned to Germany last autumn, after spending the war years in England, and I joined him in June, and I can assure Mrs. Davies that if her letter came from the...

Snt,—Conditions in the army are very well and truly stated

by " Gunner " in The Spectator of - July 16th. They apply equally to the infantry. After a roll-call parade of -fi a.m. interminable days are put in between visits to the...

GREECE AND HER NEIGHBOURS

SIR, —It may be news to Colonel Woodhouse that long before 1942 Greece and Turkey fostered the idea of a Balkan Federation. In 1935 the Greek Premier, A. Papanastasiou, and...

SIR,—In The Spectator of July 23rd you make some remarks about doctors in the new Health Service to which I must take exception. You state that for a doctor to give a warning...

StR,—Your correspondent, Mr. Frank Ward, has no knowledge whatever of the working conditions of bank employees. As a bank accountant of many years' standing I can assure you...

Snt,—I may have been lucky with my postings while serving my conscript time in the army, but I enjoyed that time and regard it as an invaluable experience. I am convinced that a...

WOMEN IN THE PRIESTHOOD

SIR, —After considering the question for many years the Methodist Con- ference in Bristol decided by a substantial majority against the admission of women to the ministry. The...

Politics have brought Newfoundland, our oldest colony, into the lime- light ; and I find myself objecting strongly to some accounts of the country and its people that the crisis...

At a recent show of the R.H.S., some special emphasis was set on Clive Greaves. This scabious is, of course, a useful enough garden flower of no peculiar salience, but it has...

REUNION OF THE CHURCHES

SIR, —In The Spectator of July 23rd both the letters from Mr. McNeile and Mr. Crossman (on Women in the Priesthood) as well as the review by Canon Smyth (on Anglicans and...

You would have thought that, in an island so thick with naturalists as this, every sort of subject would have been well treated in literature, but it is one of the first...

THE IMPLICATIONS OF NUREMBERG

Snt,—Captain Russell Grenfell's letter deserves serious attention. The date of the change in the regulations is significant. Under para. 443, Chapter XIV, Manual of Military...

Sut,—Your correspondent who refers to the roaring of blowing whales is, I'm afraid, a little off the track. When we were coming up from the Horn towards the Channel for orders...

HARVEST has begun, and though nothing is sure till the grain is threshed— on the field or off—the yield is likely to be bumper. Since Sir John Boyd Orr with other specialists...

LET US POST A COPY OF THE SPECTATOR TO YOUR HOLIDAY ADDRESS. Send instructions with a remittance—Md. for each issue—to THE SALES DEPARTMENT. THE SPECTATOR, 99 Gower Street,...

Evolution and the Group

AT eighty the Nestor of British anatomists expounds with his accus- tomed lucidity and grace what he terms the " group theory " of evolution. It restates in simple terms the...

The Last Romantic IN the days of my yOuth I read with much delight all the novels of Bulwer-Lytton. I found them, elegantly bound, in the large library of a country house, and...

A New View of the Plays of Racine. By Vera Orgel. (Macmillan. 16s.) DR. ORGEL begins her bock on Racine with a number of magisterial statements that whet one's appetite for what...

HERE is a pretty mixed bag of polar books to while away some of our Arctic evenings! Bradley Robinson's biography is the story of Matthew Henson, Peary's negro servant, who was...

WE must thank two excellent translators, Messrs. Ching Ti and Robert Payne, for giving to the English reading public this collection of short stories by a Chinese writer famous...

ALTHOUGH most of us are probably aware by now of the chief characteristics of life in Japanese prison camps, yet because these characteristics are so singularly and grotesquely...

THE Ides have it. Cassius, the pivot of Mr. Brendel's story—I cannot call him the hero, for he has hardly any character—imagines that, like the legendary typhoid-carrier...

[A Book Token for one guinea will be awarded to the sender of the first correct solution of this week's crossword to be opened after noon on Tuesday week August 10th. Envelopes...

SOLUTION TO CROSSWORD No. 486

By CUSTOS HOLIDAY influences are now superimposing themselves on the already powerful restraints on stock market activity. Turnover is lower than for a year or more and it says...

IN his Bampton lectures Dr. Micklem elaborates the Christian con-. ception of the relations that should subsist between the realms of the secular and the sacred. The secularist...