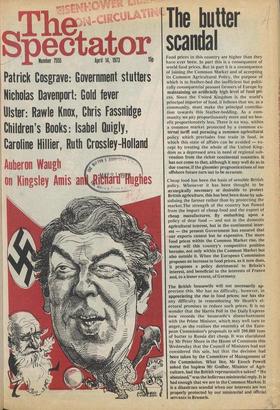 Not a leg to stand on

The Chronically Sick and Disabled Persons Act was initially a private members' bill, supported on all sides of the House of Commons, though it later won the support not only of...

The troubles in Sikkim, which have (temporarily) ended with an Indian takeover, rattled a few memories out of me. I have been a couple of times to its capital, Gangtok, further...

Governmental stutterings Patrick Cosgrave When so judicious an observer as Mr David Wood declares roundly that the Government's decision to spend E15 million to subsidise...

Six counties, a dozen runners Rawle Knox Londonderry This week, after much confusion in the stables, it has become possible to name the probable starters in Northern Ireland's...

Nothing ever happens . . Chris Fassnidge A week doing drama at the Ulster Poly? You must be mad, say my friends. Don't touch any duffle-bags, say some of them. Watch the...

Party in search of a character Nicholas Richardson "An election is like a baptism — a very good thing in its way, but you don't want to spend your life in the 'font." Perhaps...

LIKE MANY ANOTHER Puzzle has been irritated recently by whippersnappers of junior ministers (the most recent was Goldilocks Heseltine) who shout rude and pointless interruptions...

Auberon Waugh on the mysteries of Hughes and Amis

A week which produces novels from two such gifted and renowned ' authors as Richard Hughes* and Kingsley Amist involves the reviewer in odious considerations of precedence. On...

The man with no bones

Robert Moss My War with the CIA Norodom Sihanouk and Wilfred Burchett (Allen Lane £1.60) It used to be said that the main reason for thinking that the overthrow of Prince...

Isabel Quigly The Nesbit Tradition: The Children's Novel 1945-1970 Marcus Crouch (Benn £3) Anyone subscribing to the vegetablemarrow view of childhood (the idea that the...

Caroline Hillier Even if an author is not at the top of his form, he may be experimenting successfully. An inventive book of this sort is The Night the Water Came by Clive King...

A difference in eye-level

Leon Garfield Carrie's War Nina Bawden (Gollancz £1.40) A woman with her children returns to the little Welsh mining town where she'd been evacuated during the war. Uneasiness,...

The Fox and The Raven written and illustrated by Ruth Hurlimann (Longman E1.30) An immensely attractive picture book in which Ruth Hurlimann retells the familiar Aesop fable of...

Inevitably, my first reaction to BBC 2's Open Door was that Free Access Television has certain close parallels with my being given free access to an electric drill, maybe, or a...

Social insecurity Kenneth Hurren The disappointments of the World Theatre Season at the Aldwych begin to depress me. This week, a small company from Vienna's renowned...

The active left-wing militants of Actors' Equity, in their implacable opposition to the Industrial Relations Act and their calls for strike action to secure their frozen wage...

Grace notes Benny Green Next month the Post Office will be issuing a set of three commemorative stamps to mark a century of county cricket. Normally such a contingency would...

Mad air Peter Quince The gale arrivedduring the night. I was awakened in the darkness by sounds of storm and fury, never a comfortable experience when the roof over one's head...

Nicholas Davenport The most remarkable feature of the stock markets has been not the recent 9 pcint gain in equities — a periodical recovery in a ' bear ' market is only to be...

Marigold Johnson When I was invited to join a gathering of Deptford pensioners last week, the idea was to discuss forming a union — pensioners can't, of course, withdraw their...

Excess of light Bernard Dixon Astronomers work under a formidable handicap compared with many other groups of scientists: they cannot corral the objects of their research for...

Sir: Since I am all for ' letting sleeping dogs lie,' I was not especially pleased that Will Waspe, in his discussion of the 'gay' theatre and the influence of the late Hugh...

Sir: I was shocked and horrified to read your article

on A World suddenly less gay (March 31) and note "even Waspe feels constrained to proceed delicately." You say that Beaumont "was hardly known to the general public, his name...

Sir: There was a time, two or three years ago,

when sturdier constables from London's police force used to be sent out to the further and darker reaches of Wandsworth Common in nightly attempts to prevent the loonier Members...

From Mrs Rozanne D'Elia Sir: I am writing to applaud

(though perhaps regretfully) your extremely outspoken and truthful article (March 31) on Sir Noel Coward and ' Binkie ' Beaumont. While being unable to do anything but entirely...

Sir, Does it surprise David Holbrook to know that I pounced on and read his article before any other in last week's Spectator (April 7), not for digesting as sociological...

Where does one draw the line between liberalism and libertinarianism? If we must have censors do we give them any guidelines or do we let them infer what is socially acceptable?...

Sir, Extremist rule in the NUS, reproduced in miniature in the Oxford University Student Representative Council of which I have first hand experience, is based on the lack of...

Connoisseurs of well-born thoroughbreds will be in their element at Newbury this Saturday. The clash between the Dewhurst and Royal Lodge winners, Lunchtime and Adios, in the...

Sir, I read with interest Benny Green's piece What's in a name? (April 7) but failed to understand his rather violent objections to Sir Walter Scott's nomenclature. The samples...

Sir: In ' Another Spectator's Notebook' reference has been made to the enormous success of the Society for the Protection of Unborn Children's Manchester rally. One of the...

Sir: I find the whole treatment of ITV by Messrs Shulman, Raven and Brock insufferably superior and condescending. Why in heaven's name shouldn't people see what they want to...

Sir: Due to the state of the transatlantic mails, I have only now seen the article by Al Capp (December 23) titled ' Spiro Agnew v. the trendies.' Mr Capp has made a rather...

Sir: Having lately had rather a surfeit of reading novels reviewed in your pages, may I offer you a review of one as yet undiscovered. "This book is unpretentious but well...

Sir: The admission in 'A Spectators Notebook' (March 24) of the frequent typographical errors in The Spectator was most timely as I was beginning to think that your variously...

Sir: It was gratifying to read Custos's favourite comments on the work of Family Service Units in your issue of March 24. However, I would like to correct the impression that...