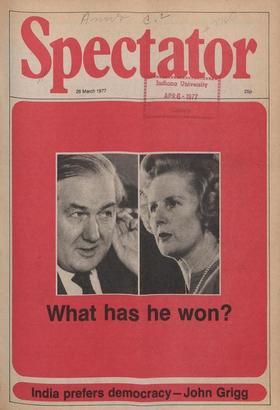 What has he won?

So, it was not to be this time. Mr Callaghan, with the c onnivance of minorities placed by accident at the centre Of affairs, has been able to patch together a political quilt...

India prefers democracy John Grigg When the election in Pakistan returned Mr Bhutto with a five-to-one majority there were many who said that the Indian election would have a...

"""•••••-,..S pring is here and the sound of grunting and cursing comes from members of the middle class digging up their gardens as a first step l° growing their own...

Malthus confounded Auberon Waugh Of course there is a silver lining somewhere, but I don't think that any reasonable person who is not a professional politician can draw much...

A cloud over defence

Tony Geraghty That last refuge of the patriot, the annual Commons debate on the defence white paper, which' began on Tuesday and continues next Monday, proves yet again that...

Grace Wyndham Goldie The report of the Annan Committee on the future of broadcasting is a very conservative document. Conservative with a small 'c'. It certainly won't please...

Richard West Birmingham In writing about the Stechford by-election I have to use that grammatical form favoured by evening newspapers—the future present perfect as in : . the...

The price of Le Corbusier

Rigor mortis Jeffrey Bernard This Year's festival meeting at Cheltenham will be remembered for the death of Lanzarote more than for anything else. Enough has been written...

Whither equities? Nicholas Davenport 41,4 00 million wiped off the equity market's c apitalisation on fears that the Labour G overnment will be defeated! One never !bought...

Sir: Mungo MacCullum's article, Queen of Australia (12 March) is an example of a striking contrast in English life, between things as they are generally thought to be and things...

Sir: Antonia Martin's recent article, Say it in Welsh (5 February) contains grave inaccuracies, It must give concern to those who are aware of the real situation concerning the...

Sir: Mr Richardson (5 March) is perpetuating an eighteenth-century genteelism. We Scotch began to describe ourselves as Scottish when we consented to have the barrier of a...

Sir: In his review (5 February) of Taki Theodoracopulos's The Greek Upheaval, Mr Christopher Hitchens says a number of strange things—among them a reference to me, which [ now...

Sir: No doubt Peter H. Young (26 FebruarY, had his own good reasons for having his rePIY, to my criticism of the Second Class Postal Service delivered to you by hand. In' the...

The city and the plain Simon Raven Cavafy's Alexandria: Study of a Myth in Progress Edmund Keeley (The Hogarth Press £7.50) Edmund Keeley intends here to distinguish the...

Jonathan Benthall The Mediaeval Machine: The Industrial Revolution of the Middle Ages Jean Gimpel (Gollancz £7.50) The Nature of Science: The History of Science in Western...

Rayner Heppenstall Conan Doyle: A Biographical Solution Ronald Pearsall (Weidenfeld and Nicolson £5.95) I wonder whether the Baker Street irregulars and other Sherlock Holmes...

Nick Totton Memoirs Pablo Neruda (Souvenir £6.50) Perhaps our language's exceptionally large vocabulary is a factor in the deep estrangement of English poetry from the English...

Benny Green Instead of the Trees J. B. Priestley (Heinemann £3.50) Priestley's latest book is subtitled 'A Final Chapter of Autobiography, which implies that we have already...

Art and universality John McEwen People like art at all it is usually because it makes sense. Most 'abstract' art leaves them cold because it is obscure. Often, of course, t...

Think pink Edward Jones The pig was great! To a roar of applause it appeared, hanging forty feet above the crowd, its orange eyes blinking. Having swung overhead with...

Workshops Jan Murray If choreographic workshops give any indication of coming trends in contemporary dance, it looks as if we are in for a lighthearted, even lyrical, few...

Low levels Richard Ingrams I suppose one should always be suspicious of programmes which start with a disclaimer of this sort---`There is no commentary here, no axe to grind....