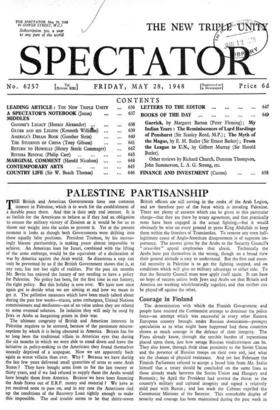 T HE British and American Governments have one common interest in Palestine, which is to work for the establishment of a durable peace there. And that is their only real...

The determination with which the Finnish Government and people have resisted the Communist attempt to dominate the police force—an attempt which was successful in every other...

The announcement of a bonus issue of twelve clothing coupons, of the removal of a few items from the ration list and of the down- pointing of a few others should be the occasion...

Duly grateful as periodicals like The Spectator are for the can- cellation of the last cut in their paper-ration (from 351 per cent of pre-war consumption to 311) the statement...

There is no turning back from the road on which Czechoslovakia embarked in February. Every day makes it more difficult for the anti-Communist majority to express itself except...

There is no need for foreigners to be unduly impressed by the swing of the pendulum in American internal politics. At the moment the betting is heavily in favour of a Republican...

The Education of a Doctor

The teaching of medicine in this country has always been more concerned with realities than it usually is on the Continent. A newly qualified English doctor may have less...

S UNBURNED faces, and the crimson dome of Mr. Dalton's head, told the tale of the Whitsun recess when the Houses of Parliament reassembled on Tuesday, and Members quickly...

What is the sense of the attempt which the Treasury made last Saturday to explain away the shocking adverse balance of trade revealed two days earlier by the Board of Trade...

T HE future of the British Commonwealth is arousing serious reflection, as it should, in many quarters. General Smuts is the latest and most distinguished of several...

"It would be necessary to arrange a short extra session

of Parliament between September and October for the purpose of having the [Parliament] Bill passed a second time." The Times Parliamentary Correspondent. On the precise method...

A word more on stamps. A reader in New Zealand

(who gets his air-mail edition of The Spectator in seven days) has sent me a letter adorned with no fewer than ten current postage stamps of different denominations, of nine...

I T is no use pretending that a chance collection of Englishmen in frock coats or morning coats of different cuts, carrying umbrellas or not carrying them, wearing top hats or...

If you were told that a train was to be

painted in "plum and spilt milk lined with bands of yellow-maroon-yellow separated by lines of spilt milk" what would you expect it to look like ? You are told that, as a matter...

Very rarely is so distinguished a company assembled as gathered,

at the hospitable invitation of Mr. Justice Birkett, at dinner at the Reform Club on Tuesday to do honour to Judge Parker, one of the two American Judges at the Nuremberg trial,...

The letters in Tuesday's Times from the Headmasters of Shrews-

bury and Tonbridge (the former is the present Chairman of the Headmasters' Conference) on the new school examination raise an important issue that should not go by default. It...

Active as ever in body and mind at 77, Lord

Samuel never makes a speech without coining an epigram. Addressing a hundred Liberals from about a quarter as many countries at Zurich on Monday, he observed that though...

By HORACE ALEXANDER S OME years ago I heard Professor Radhakrishnan express the hope that Indian freedom would be achieved during Mr. Gandhi's lifetime, as he thought it would...

GLUBB AND HIS LEGION

By KENNETH WILLIAMS G LUBB PASHA, Commandant of the Arab Legion, is to the average newspaper-reader a semi-legendary figure, one of those Englishmen who, like Lawrence, have,...

By GUNTHER STEIN T HERE is a school of thought which holds that a high place among documents admitting to the world in general the free enterprise system of the United States...

THE STUDENTS OF CHINA

By TONY GIBSON A T the end of 1945, when I was there, Kunming, far to the south- west of China, was still the centre of one of the most far-sighted and courageous experiments...

By HENRY STEELE COMMAGER F OR almost a generation now the English public has been familiar with American literature through Hemingway and Faulkner, Steinbeck and Wolfe,...

By PHILIP CARR T is necessary to know the Cote d'Azur in order to put into their proper perspective the articles in the British and American newspapers repeatedly announcing...

By HAROLD NICOLSON S IR OLIVER FRANKS this week becomes the new British Ambassador in Washington and his predecessor will at last be able to enjoy the long-desired liberty of...

IT was a great feat on the part of the Morley College Concerts Society to give a performance of Monteverde's Coronation of Poppaea at the Central Hall. As one of the...

THE THEATRE "The Masque of Hope." (Performed at Oxford by the O.U.D.S.). "HERE we can see," Princess Elizabeth, visiting Oxford for the first time in her life, had said...

"A Double Life." (Leicester Square.)—" So Evil My Love." (Plaza.) IT is uncomfortably interesting to see how an actor, so admirable in the modern idiom as to be above...

A Sport Whenever I come across a book on trees

I look first at the Lombardy poplar to seek comment on a strange fact, once imparted to me by Sir Arthur Hill when Director of Kew Gardens. After special study, both botanic and...

QurrE the most important exhibition of painting in London at the moment is that at the Tate, with which the Trustees have very properly attempted to commemorate the prodigious...

In the Garden The tulips begin to drop their petals

; and there is a general idea that the best way of preserving the plant from degeneration is to dig it up for a while. No doubt the belief is well justified, but there are...

Ringers of Birds The ringers of birds, such as the

owner of the ingenious cage at Skokholm, are being imitated by the Ministry of Agriculture and Fisheries. Last year a very large number of salmon and sea trout were marked both...

A Manurial Duel I see that .the warfare between the

composters and the students of artificial manures . grows yet more acute. Lady Seton, for example, who has done yeoman service for a score of years, not least on behalf of urban...

How completely the standard dates for this and that event in natural history have been disregarded! The roses, which belong to June, blazed in mid - May. That earliest of all...

Sta,—I am surprised, nay, dismayed, that none of your learned

correspon- dents expatiating on Resistentialism should have even mentioned the one and only begetter of the doctrine—I mean, of course, Friedrich Theodor Vischer, the German...

• THE WAR IN PALESTINE SIR, —The Via Dolorosa with which Palestine is faced reminds one of the words of Christ: "And when ye shall see Jerusalem compassed with armies, then...

Sht,—Although as regards rudeness I cannot compete with Sir Osbert, I am sorry if I have been rude to him. Coming from an "inferior," it must be particularly galling and is...

should like to express my gratitude to Miss Croome for drawing attention to Signor Damasci's superb monograph on Resistentialism, which appears to me to be the principal link...

. PARTITION AND THE CROWN

SIR,—The question of the Crown is not the only fundamental issue between the two Irelands, but fundamental it is. In spite of the External Relations Act the Twenty-Six Counties...

Sta,—May I say how much I disagree with Mr. Dymond's

letter, in which he seems to admire the upbringing which Sir George Sitwell gave to his children. A sane and sound austerity can do no harm, but Sir George imposed an eccentric,...

SIR,—Mr. J. B. Hynd's article on Groundnut Achievement confirms rather than disproves the doubts of the early critics of this scheme. The Government's contention had originally...

Sta,—Further proof of the folly of our Government's system of bulk- buying is shown in the recent report of the purchase of maize from the Argentine. Britain bought 1,200,000...

SIR,—In your first article last week, you stated that "less coal per manshift is being produced today than in 1938." The published statis- tics do not support this. In 1938 the...

Snt,—By his review of C. S. Forester's book, The General, Robert Kee hopes to introduce new readers to this brilliant study of a Great War general. Surely no better commendation...

- Sta,—Your footnote to Colonel Butler's letter, saying that "nearly every- body else" does not like General Franco, is unworthy of The Spectator. It is entirely untrue. I find...

THE HEALTH ACT AND WIDOWS

Sts,—My attention has been drawn to a letter which appeared in your issue of May 14th under the heading "Widows under the Health Act." The writer must, I am afraid, have...

SIR,—Out of kindness one tends nowadays to overlook the exaggerated language of journalist art critics. But, in fairness both to your readers and to Mr. Henry Moore, I think...

StR,—In view of your editorial remarks that Marshal Stalin's letter "appears not to have been published," I would point out that it was published by Tass, but for some reason...

Sra,—I am sorry that my opening sentences were not emphatic enough. I hoped that I had made it clear that I was not discussing the general merits of the new school examination,...

My Indian Years : The Reminiscences of Lord Hardinge of Penshurst. (John Murray. 10s. 6d.) • IN this unpretentious volume Lord Hardinge has told the story of his Viceroyalty...

The Best Actor Garrick. By Margaret Barton. (Faber and Faber. 213.) THE greatest English actor was by origin hardly English at all; his father was a Frenchman, the son of...

Faith of a Liberal

AT a time when faith in the liberal creed is wilting, it is refreshing to find it restated with forthrightness and clarity. Professor Gilbert Murray retains all the courage of...

The Myth of the Magus. By E. M. Butler. (Cambridge University Press. 21s.) Miss Btrma, now Professor of German in the University of Cam- bridge, published in i935 a work on "the...

For Endurance. Collected Poems. By Lilian Bowes Lyon. Intro- duced by C. Day Lewis. (Cape. 8s. 6d.) FOR nearly twenty years I have found pleasure in this poet's work. It has...

FORD'S "flights of fancy," to use the words of Mr. Goldring, his remarkably sympathetic biographer, even now offer the literary historian such attractive pitfalls that only the...

The Georgian Buildings of Bath. By Walter Ison. (Faber and Faber. 52s. 6d.) ALTHOUGH nearly every book on architecture which makes its appear- ance does so with an announcement...

[A Book Token for one guinea will be awarded to the sender of the first correct solution of this week's crossword to be opened after noon on Tuesday week June 8th. Envelopes...

SOLUTION TO CROSSWORD No. 477

IT is difficult to see quite what purpose this book will serve. Its intentions are admirable ; so are its origins. It springs from a series of meetings held in London by the...

woode. 12s. 6d.) From the City, from the Plough. By Alexander Baron. (Cape. 8s. 6d.) SINCE its origins in Defoe and Richardson, the English novel has been interested in moral...

By CUSTOS As I suspected, London has made only a half - hearted response to the lead given by Wall Street, and it will be surprising if, at this stage, there is any broad...