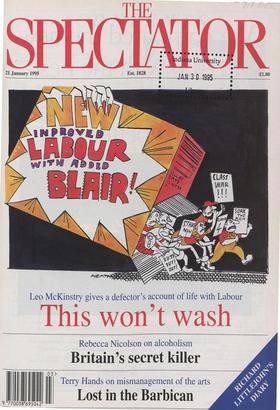 M r John Major, the Prime Minister, made a speech in front of a portrait of King George II; he said that he hoped the words `peace comes dropping slow' came from the Irish poet...

Conservatives sense a turning point, but Mr Major should beware of a false spring BORIS JOHNSON A when the salmon somehow know the time has come to travel upstream to spawn,...

RICHARD LITTLEJOHN I t had to happen. A hospital for hypochondriacs is to open in Norway. `Hypochondriacs may only imagine they are ill, but they really do suffer,' said Dr Ing-...

Time for desperados to gather on the shadow line AUBERON WAUGH h e exact point at which intelligent, humane, educated people decide that our democratic system has failed will...

What will a Labour government be like? Just look at Labour councils, argues Leo McKinstiy. He should know: he was on one and, until publication of this article, worked for...

Radek Sikorski, who has recently restored a family estate in Poland, discovers that his fellow landed gently are mostly ex-communist officials Dwor Chobielin LAST MONTH, I...

Mr Thomas GIRTIN, of 177 Kingston Hill, Kingston upon Thames, Surrey, formerly of 63 Church Street, Old Isle- worth, Middlesex, the writer and wit, who died on May 24th last,...

CARNIVAL OF THE ANIMAL LIBBERS

Alasdair Palmer on how the provisional wing of the animal rights lobby is poised to take over from the IRA as Britain's main terrorist threat ON 16 SEPTEMBER last year, two...

THE CULTURKAMPF in Germany has come to a final end, the Reichstag having voted that the Jesuits shall be readmitted into the Empire. There is some doubt whether the Federal...

TAKEOVER OF THE TEENAGE SCRIBBLERS

David Martens is alarmed by the extreme fashionability of journalism among the bright young things: who will do the real work? ENGLAND in the year 2000 will be a nation not of...

persist. . . THE MORNING before my clinic in the prison last week, I was woken at three o'clock by the irruption into my dreams of the sound of my next-door neigh- bour's car...

THE SECRET KILLER OF THE MIDDLE CLASSES

Rebecca Nicolson, whose mother, uncles and maternal grandparents were all alcoholics, wonders why drink is no longer demonised WHEN a famous figure from the arts world dies of...

The mysterious, almost mystic, characteristics of a left-wing newspaper PAUL JOHNSON T he removal of Peter Preston as editor of the Guardian was inevitable and, in the...

Out on a wing with the wizard of dribble Tony Blair takes the field CHRISTOPHER FILDES F ootball clubs have a place of their own in my Bad Investment Guide. They have two...

Sir: In the weeks since you published my brief letter (29 October) in response to the article by William Dalrymple (`If I forget Thee, 0 Jerusalem', 22 October), which alleged a...

Sir: Most aspiring authors have their stuff turned down from time to time, and it takes a special kind of self-importance to dignify a rejection slip as a sinister intention to...

Sir: Widespread outrage has been expressed because it was recently disclosed that a surgeon had supervised the removal of an appendix by a nurse. The most vocif- erous protests...

Sir: How dare Lord Charteris call the Duchess of York vulgar (`Saying what everyone thinks', 7 January)? She was recently here to visit a home for retarded children, was much...

Sir: Mr Alistair Home (Letters, 14 Jan- uary) suggests that Jeremy Paxman should follow up his article by another: to advise distinguished politicians, generals, heads of...

I claim my place in the Valhalla of feminist heroes SIMON JENKINS I have resigned from the Oxford and Cambridge club. I did so because the club does not admit women to full...

Another guided tour-de-force Philip Hensher THE AFTERLIFE by John Updike Hamish Hamilton, £14.99, pp. 315 U pdike (one of those competent American writers I can't really read)...

Nigel Spivey THE CORRESPONDENCE OF THOMAS HOBBES edited by Noel Malcolm OUP, 2 volumes, £60 each, pp. 586, pp. 510 T hese are not volumes for the vulgar mob. As their editor...

Is this the union he wanted?

John Laughland JEAN MONNET: THE FIRST STATESMAN OF INDEPENDENCE by Francois Duchene, with a foreword by George W. Ball W.W. Norton, £22, pp. 478 I f ever there was an homme du...

Hull is other people

Tom Hiney GAGARIN & I by Stephen Blanchard Chatto, £9.99, pp. 249 My aunt and mother in the kitchen — a wet mid-week morning, the radio playing and steam lifting from the...

Andrew Roberts THE LOST PRIME MINISTER: A LIFE OF SIR CHARLES DILKE by David Nicholls Hambledon Press, £25, pp. 386 S ir Charles Dilke was the Tony Benn of his day. He was the...

How they beat the miners

Paul Foot THE ENEMY WITHIN: MI5, MAXWELL AND THE SCARGILL AFFAIR by Seamus Milne Verso, f15.99, pp. 344 T his is a book about spies. Since its author is a journalist on the...

Words from the Great White Shark

The Barbican The danger of playing for money Terry Hands B aroness O'Cathain has finally left the Barbican. Not only is her desk cleared, but tickets which used to bear her...

The price of a nanny Nigella Lawson I t is possible for a gap in the market to be so yawningly obvious that when some- one fills it it's almost embarrassing. 'Of course!' one...

A tacky house Taki Gstaad T he last time Gstaad had so much snow and wonderful weather was 19 years ago, a winter I also remember because my baby daughter took her first...

Smelling the Fifties Jeffrey Bernard I n one of the Sunday papers last week I forget which one and can only tell them apart from the slowness with which they pay contributors...

Great celebration Nigel Nicolson T he ballroom at Grosvenor House is our nearest equivalent to the 18thscentury Assembly Rooms at Bath, York and else- where. It is the perfect...

Say no to Newport Holly Budd cs Creaky' Bacon, chief gossip, bustled in. 'Where's Newport?' `Gwent.' `Isle of Wight,' called Debbie from the other room. 'I was born there.'...

• SINCE Peter Cook's recent death, I have been puzzling over the obituaries and fea- ture articles written about him. Several make reference to his fondness for smok- ing,...

A striking achievement Auberon Waugh last forever in the months between. In January 1993, I also offered Roth- bury's New Zealand Sauvignon Blanc 1992 from Marlborough at...

Malvedos 1979 Vintage Port for the first correct solution opened on 6 February, with two runners-up prizes of £15 (or, for UK solvers, the latest edition of The Chambers...

Genius is really genius Frank Keating SIR STANLEY MATTHEWS will be 80 on 1 February, and this week the Football Writers' club threw a birthday party for him at the Savoy,...

Dear Mary. . . Q. I would greatly value your advice on how to find a discreet solution to a pressing dilemma. If not managed with some delica- cy, the situation will bring...