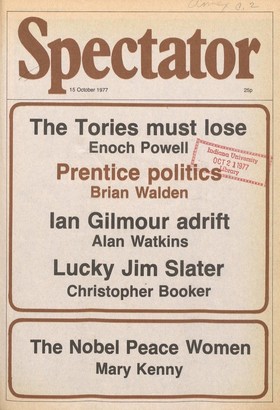 Mr Enoch Powell continues to shun the Conservative Party and to maintain his thesis that, as he puts it in this week's Spectator, 'soberly it is hard to see how the Conservative...

Sober as a newt Ferdinand Mount Blackpool 'I am inclined to think that there must be some mistake, and that this bird who has been calling here is some different variety of...

This year's political cliché has it that Labour is replacing the Conservatives as 'the natural party of government'. After successive weeks observing the two parties I think I...

The pounds in my pocket Auberon Waugh Last week Westward Television showed The Spy Who Came in From the Cold, adapted from John le Carre's novel in 1964 and surely one of the...

The white tribes of S.W. Africa

Richard West It was appropriate that the United Nations chose as Commissioner on the affairs of South West Africa a man, Sean MacBride, who was once chief of staff of the Irish...

Charles Foley San Francisco In the wild, remote hills of Humboldt county, some 200 miles north of San Francisco, the grass is as high as an elephant's eye. In the case of the...

LADY CLARKE OF TILLYPRONIE'S COOKERS' BOOK; almost anything by or about John Oliver Hobbes. Recording of Constant Lambed s ballet suite The Prospect Before Us. Write Spectator...

Patrick Cosgrave What, exactly, would the NATO powers do if the forces of the Warsaw Pact launched an attack on Western Europe? This, I believe, is an appropriate question to...

Enoch Powell I was, (1 confess it) one of those who, in the far-off days on either side of 1960, accused Harold Macmillan of having 'debauched' the Conservative Party. We meant...

After Prentice, who next?

Brian Walden I pity Reg Prentice. Whatever the rights or wrongs of what he has done, he does not deserve the treatment that British politicians reserve for defectors. British...

The women of peace

Mary Kenny For Betty Williams and Mairead Corrigan, it's just as well that the Nobel Peace Prize is in the gift of the Norwegians; they would certainly not have been thus...

Christopher Booker Twice in the past fifteen years, London has been overshadowed by rather nasty outbreaks of collective fantasy. The first was the period between the Profumo...

Small is vote-catching Nicholas Davenport Curiously it was not the dreaded Labour Party conference which turned the Stock Exchange down at the end of last week, for the red...

The horrors of divorce

Jeffrey Bernard The fact that more and more people are getting divorced has recently been described by most newspapers as being `alarming'. I don't find it at all alarming. I...

Sir: On the subject of freedom and the threat posed to it by the closed shop, Mr John Grigg writes in a careless and uncon vincing fashion (8 October). Freedom without...

Sir: John Grigg's reply to those who have attacked him

in the correspondence column of Spectator is the work of a man on the defensive. He interprets the U-turns of the Heath government as a return to sanity after the doctrinaire...

Sir: Your art critic's review of the Ian Hamilton Finlay exhibition (Artyfacts, 8 October) is either a case of sour grapes or the application of a new and curious principle in...

Sir: Through the welter of John McEwen's wit (above the

Beano and Dandy, say, but beneath Jilly Cooper), one discerns an assortment of unexplained antipathies towards, e.g., cultural analogies, sunshine and flowers, and needlepoint....

Sir, As one who attempts to follow the vagaries of

modern art — bricks and all — as best he can, I remain rather puzzled by your critic's remarks on Ian Hamilton Finlay's exhibition at the Serpentine Gallery, which I recently...

Sir: Bravo, John McEwen. Never have I read an article

in the Spectator with so much relish and deep enjoyment — it was like a blast of clean fresh air entering a putrid atmosphere — as his on Hamilton Finlay and his band of...

Sir: Ah well, after a television-free summer, back to work and back to the saga of Richard Ingrams's continuing obsession With everything I do on television. Flattery indeed!...

Sir: With reference to the article (8 October) about Mr Morarji Desai's routine of drinking his own urine every morning, I would like to point out that this is a very anFient...

Sir: Though the Spectator may see most of the game, I am unable to account for the omission by Mr Patrick Marnham in his article Doing the decent thing (1 October) of the church...

The two who made it

Sir: I trust Nicholas Davenport will not be annoyed, if I remind him, Peter Jay and James Callaghan that Moses did not lead the Children of Israel into the Promised Land. On the...

Sir: My attention has been drawn to an article in the Spectator of 13 August by Mr George Gale, entitled Their imperial Excellencies. In this he makes a number of observations...

Propaganda without theory Alan Watkins Inside Right Ian Gilmour (Hutchinson £5.95) The J 960s witnessed, in addition to much charlatanism and — a characteristic and revealing...

Jan Morris Animals and Men Lord Clark (Thames and Hudson E10.50) Of the dead, Lord Clark, and the World Wildlife Fund one speaks only good, and I must begin this review of the...

Peter Ackroyd Sade, Fourier, Loyola Roland Barthes (Cape £5.95) There is a sentence of Nietzsche which hangs over French criticism: 'I fear we are not getting rid of God...

Reginald Pound The King Without a Crown Daphne Bennett (Heinemann £7.50) A notable nineteenth-century German, Alexander von Humboldt, the naturalistexplorer, did not like the...

Richard Shone Somerset Maugham, Anthony Curtis (Weidenfeld .26.50) Anthony Curtis is not entirely to blame for having written a displeasing book. One senses a publisher's...

Benny Green Edward Lear and His World John Lehmann (Thames and Hudson £3.95) How pleasant to know Mr Lear continues to stimulate the industry of biographers, even though Mr...

King of Spades Rodney Milnes It has been quite a fortnight in London's opera houses, with preconceptions and prejudices falling like autumn leaves. All this and industrial...

Sensations John McEwen Retrospectives (even shows) by the best contemporary American artists rarely come London's way these days, so Robert Ryman's at the Whitechapel (till 16...

Sheiky Taki Theodoracopulos Paris While the world's press has been busy reporting the breakup of the leftist alliance in France, the scandalous and reverse discriminatory...