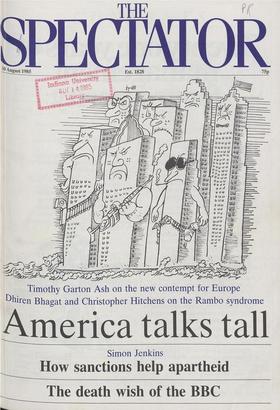 Oxygen of censorship P ressure on the South African govern- ment grew. The National Union of Mine- workers gave notice of an indefinite strike by black miners at gold and coal...

LAST week, after enthusiastically driving a bulldozer to inaugurate the replacement of Broad Street Station by a modern office development, Mrs Thatcher lamented that `we live...

A WEAKNESS FOR TERRORISM hat was the strike by BBC and ITN Journalist on Wednesday about? It seems to have been a protest against the Govern- ment for its intervention in the...

I did enjoy being the victim of a hoax the other day. A company called Verbal Books sent a letter about their New American Shakespeare, which would 'use the lan- guage of the...

Auberon Waugh is on holiday.

Timothy Garton Ash on America's growing doubts about paying billions of dollars to defend an enfeebled yet recalcitrant Europe Washington SO THE villains are not just E. P....

Simon Jenkins on the way Western economic embargoes harm South African blacks I TELEPHONED a South African friend last week for news of the state of emergen- cy. He roared...

Lord Randolph Churchill is evidently bent on being a sensational Minister. Some two centuries ago a learned Eng- lish Jesuit wrote a book to prove that the classics were written...

Dhiren Bhagat on the men convinced that American POWs remain in Vietnam I AM in the habit of walking around cities at night, talking to whoever will talk to me: pushers,...

THE HAWKS WITH WHITE FEATHERS

Christopher Hitchens on the American militarists who dodged the draft When you've shouted Rule Britannia,' when you've sung 'God save the Queen', When you've finished killing...

argues that the Corporation needs a new chairman IF ANYONE asks the BBC Lord Beaver- brook's famous question: 'Who's in charge of the clattering train?', answer comes there...

BANKERS' waiting-rooms are sprucer than dentists', but the principle is much the same. Maurice Denton took it to extremes when he arrived at First National Finance, to embark on...

TO ME a galleria is a tunnel — as found on Italian roads, where notices remind drivers to accendiarise their lights in the galleria. To Ralph Halpern and Sir Terence Conran it...

IT SERVES the pension funds right. How it serves their beneficiaries, actual and prospective, those for whom they manage their £100,000-odd million of money that is another and...

Don't do something, just stand there, says the City's purist CHRISTOPHER FILDES T he City is losing its best regulator just when it is embarking on its last chance, or another...

Sir: Christopher Hitchens's article, ghoulishly announced as 'Living with a dying President', (20 July) was one of the most tasteless, dishonest, and pretentious I have ever...

Sir: We are writing on behalf of the `self-besotted goof' of this country to ask John Osborne how he can blame us for the `fine mess' of starvation, greed and injus- tice the...

Sir: Regular readers of your paper will know that Auberon Waugh celebrates the advent of the silly season with a pilgrimage to the tomb of St Thomas Aquinas. I had been...

Sir: It is difficult to know exactly what Giles Auty is bemoaning in his article (The art of endurance', 3 August). Is it the cessation of the part-time art teacher or British...

`Against me you cannot fight' John Keegan EAGLE AGAINST THE SUN by Ronald H. Spector Viking, f16.95 THE LIGHT OF MANY SUNS: THE MEANING OF HIROSHIMA by Leonard Cheshire...

William Deedes THE RANDLORDS: THE MEN WHO MADE SOUTH AFRICA by Geoffrey Wheatcroft Weidenfeld & Nicolson, £12.95 0 ne of my favourite flights of fancy is to transpose Cecil...

Good and seemingly good on the kibbutz

Francis King A PERFECT PEACE by Amos Oz Chatto & Windus, £9.95 ■■ 111 W ith the passing of the years, people of the outside world have tended in- creasingly to see the...

Cultural conscience of the rich

Duncan Fallowell CONVERSATIONS WITH CAPOTE by Lawrence Grobel Hutchinson, L10.95 I n this embattled world the homosexual has increasingly taken on the full-time job of being...

In the urn a torch has lit the busy-lizzie. Officious pigeons start some vague proceedings. The crowded, brightly-hatted nasturtium audience Raises green parasols against the...

A dog-lover thrown to the wolves

Allan Massie MARTHE: A WOMAN AND HER FAMILY: A FIN-DE-SIECLE CORRESPONDENCE translated by Donald M. Frame Viking, f12.95 M arthe is a collection of letters which, without art...

John Jolliffe MADEMOISELLE: CONVERSATIONS WITH NADIA BOULANGER by Bruno Monsaingeon, translated by Robyn Marsack Carcanet, f6.95 T he author of this book (who is a...

Non-Fiction Thomas Hardy: A Biography by Michael Millgate, Oxford, £7.95 The Autobiography of Margot Asquith with an introduction by Mark Bonham Carter, Methuen, £4.95 Victoria...

Architecture Forty under forty (RIBA till 23 August) A plethora of utopias Rowan Moore Y ou may by now, perhaps several times, have read an article that goes as follows. It...

My First Wife (`15', selected cinemas) Way down under Peter Ackroyd I t can only have been a fortnight ago that we witnessed a film made by a Yugoslavian in Australia; now,...

Christopher Edwards will resume his theatre column next week.

Youthful and European Peter Phillips la ving moaned about the lack of exciting foreign orchestras in the Proms this year (the Edinburgh Festival is streets ahead on this), it...

Bucket and spade Ursula Buchan T he stamens of the philadelphus have finally browned, the last pink petal of Madame Gregoire Staechlin, that great fat blowsy tart of a rose,...

Man behind the bomb Alexander Chancellor I hate to return to the subject of nuclear war, about which there is much too much on television at the moment, but last Sunday's...

Home sweet home Taki s anyone unlucky enough to visit the capital of the olive republic of Greece knows, Athens is a veritable concrete desert, devoid of greenery, smog-filled...

Slugging it out Alice Thomas Ellis W hat a bitter, sullen summer — or perhaps it's just me. I'm feeling very resentful because I've hardly set foot out of doors for fear of...

Sleeping partners Jeffrey Bernard W e were discussing John Osborne's alternative bedmates in the Coach and Horses the other day and I found myself wondering who were, might...

Other men's trousers P. J. Kavanagh I t must have begun a couple of years ago when I sat sucking my pen and staring out at the rain and decided I needed a change. Not a...

Hypermodern Raymond Keene 0 ne of the most fascinating characters in chess history was the great Aron Nimzo- witsch. He was a lonely, suspicious genius, largely responsible...

Strong medicine Jaspistos I n Competition No. 1381 you were asked for a poem with a message of doom and despair in the manner of Wilhelmina Stitch or Patience Strong. Just...

Here's herbs for happiness I THINK tarragon is y most

A short obituary notice, please, of an imaginary public figure who led an envi- ably and outrageously work-free and trouble-free life. Maximum 150 words. Entries to 'Competition...

Spectator Wine Club Owing to the exceptional response by Spectator

readers to the July Wine Club offer, stocks of our No. 1 wine, Coulanges La Vineuse 1982, are now exhausted. Recount Wines, however, have been able to secure a further...