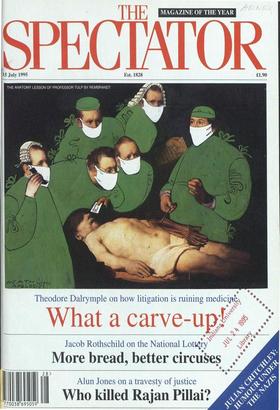 The French, they are so virile. 0 rangemen in Portadown, Co. Armagh, spent three days confronting police who would not let them march down Garvaghy Road, which borders a...

ANDREW MARR T he kaleidoscope is shaken. One of the colourful quirks of the post-reshuffle politi- cal scene is its effect on the longer-running rivalry between Malcolm Rifkind,...

The contest for supreme power between the colourful character and the grey man CHARLES MOORE N eurosis', it was explained to me at a party in the middle of the Conservative...

VICTIMS OF THE VICTIM CULTURE

Theodore Dalrymple argues that the American contingency fee system and British legal aid are combining to remove valuable medical treatment from those who need it Man is born...

THE MAKERS of that dreadful film about King Arthur have been mocked for their Hollywood vocabulary, but writers of historical novels run into trouble even when setting their...

Alun Jones, QC, gives a personal account of the disgraceful trial and death of a man once at the hub of London society THE MANY British friends of Rajan Pil- lai, a 47-year-old...

HOW TO BURY THE HATCHET

Tristan Garel-Jones devises a European policy that will unite the Conservative Party, except for Norman Lamont THE LITTLE local difficulties of the last few weeks have...

BREAD AND CIRCUSES, NOT CAKE

Jacob Rothschild responds to criticism of his choice of good causes for Lottery largesse, and hints at future beneficiaries FOR ALL the shocked and puritanical tones of last...

A SPECTATOR'S NOTEBOOK NEWS that reaches me privately from Berlin confirms in all essentials most of what the newspaper correspondents are saying about non-fraternisation — and...

Two corner boys strike a corrupt bargain that will not stick PAUL JOHNSON h e essence of the constitutional crime John Major committed last Tuesday was that he traded public...

Chew on this stick of boardroom rock and taste the humbug flavour CHRISTOPHER FILDES A more agile man than Sir Richard Greenbury would have hidden in the sta- tionery cupboard...

Sir: May I add to the chorus of admiration for

your article about the birth of your daughter? My feelings on this subject are strong. Had I been conceived today and my muscular dystrophy been detected by screening, doctors...

Sir: As you indicate, all babies are special, no one

like another. I have been in general practice for 40 years and am horrified by the changes in attitude of so many of my colleagues — I just can't understand it. Articles like...

Sir: I am writing on behalf of Labour Life Group

members to express our best wishes to you and your family on the birth of your daughter as described in your article in The Spectator magazine recently. But it is sad that what...

Sir: Why, in praising British Cheese, does Martin Vander Weyer find it necessary to denigrate the cheese production of France ('Cheese: British is best' 1 July)? The devel-...

Sir: I would like to redress the balance (All you need is life', 17 June). First, I congratu- late you on the birth of your daughter. I admire the courage and compassion that...

Sir: Blaming the medical profession for the popularity of termination

of Down's syn- drome foetuses (Avoid handicaps. Kill babies' 8 July) seems a rather cheap way to avoid having to examine the morality of society in general. It does not seem to...

Sir: Jonathan Manthorpe (Letters, 8 July) rules out two possible candidates for the vacant equestrian plinth in Trafalgar Square on the ground of their non-horse- manship:...

Sir: Eight months into its first ten years, no one would claim the National Lottery is perfect, but it does seem a bit odd to attack it, as you did ('Let them eat cake', 8...

Sir: You argue that John Major became Prime Minister because he was not Neil Kinnock ('We deserve better', 1 July). In 1990? You have left uncorrected the statement in a...

Sir: My 86-year-old aunt (who doesn't read The Spectator) said

to me yesterday, 'How disgusting this business is about Hugh Grant. Men have always popped out for a bit of sex. Why can't the press behave prop- erly and leave him alone?' Her...

Blown out of proportion

Apsley House: great art gallery, pity about the museum SIMON JENKINS I have always regarded Apsley House as a large stone whale beached by waves of traffic at Hyde Park...

The boy scout lied David Caute ANDRE MALRAUX: A BIOGRAPHY by Curtis Cate Hutchinson, £25, pp. 415 A ndre Malraux was never a Marxist. The doomed revolutionaries of The...

History with many cunning passages

Dominic Lieven THE BLACK SEA by Neal Ascherson Cape, £17.99, pp. 306 I read this book looking out of my win- dow at - a Japanese summer storm. My neighbour's roof sagged under...

The horror of war through the eyes of a girl

Simon Courtauld THE CHANCES OF DEATH: A DIARY OF THE SPANISH CIVIL WAR by Priscilla Scott-Ellis Michael Russell, £17.95, pp. 240 T he poet Edward Thomas, in the diary that he...

What became of Huckleberry Finn?

Tom Hiney INDEPENDENCE DAY by Richard Ford The Harvill Press, £14.99, pp. 451 W hen a good novelist chooses a boring subject to write about, the results can be exasperating....

The light that shines before men

Francis King A HOUSE IN PONDICHERRY by Lee Langley Heinemann, £12.99, pp. 276 F rom the 18th century to the present day, a host of characters, Indian, English, French and...

Following in the steps of the master

By the time you look you've missed it, these lines are cold, the sky mussed, the snow-shy cardinal newly gone. Come and see this, I shouted, this red bird at the feeder, this...

Frances Partridge LOBSTER AT LITTLEHAMPTON by Clare Sheppard Tabb House, 12.95, £7.95, pp.176 T he striking title of this book of child- hood memories comes from the 'little...

Not funny but interesting

Julian Critchley UNDERGROUND HUMOUR IN NAZI GERMANY, 1933-45 by Franz Hillenbrand Routledge, £45, pp. 297 T hree years ago I gave lunch in the Commons to my daughter Melissa...

M usic A toffee-nosed elitist? As Sir John Drummond launches the centenary Proms, he tells Richard Osborne why he is out of step with the BBC A ter the 100th season, comes...

of Being Earnest (Old Vic) All a matter of timing Sheridan Morley o r several years now an American thriller writer strangely unknown over here, George Baxt, has been...

Change of direction Taki M y father died six years ago on July 14, and this year will be the first that I will not be in the Big Olive to visit his grave. The year following...

Sheer bliss Nigella Lawson W hen I first started watching Mas- terchef, Loyd Grossman used to get on my nerves. It's not so much that, rather late in the day, I've twigged...

Going behind the stalls Jeffrey Bernard I am sure it was right and I was delighted that Emma Humphreys should have been freed from prison last week but I can't help wondering...

Secret seduction Carole Morin E ast Berlin used to be a safe bet for a summer holiday. Short flight, no beach, a Grand Hotel that was never fully booked. The Wall was a...

Chez Bruce NNN fkb. 1 C1rWal■-•. — CHEZ BRUCE is something of a restaura- teur's restaurant: nearly every chef I've come across over the past month or so has been raving about...

Techno tricks Andrew Robson WHILE KASPAROV is being seriously challenged by the top chess computers, I cannot envisage the world's top bridge players being overtaken by a...

Wunderkind Raymond Keene ELEVEN-YEAR-OLD Luke McShane appears to have made a quantum leap in his playing strength after his £12,000 spon- sorship from Psion Computers earlier...

A first prize of £25 and a bottle of Graham's Late Bottled Vintage 1988 Port for the first correct solution opened on 31 July, with two runners-up prizes of £15 (or, for UK...

Vive la difference Simon Barnes THERE IS a certain kind of American woman who speaks in the voice of a car- toon mouse. It' s, like, kind of weird, you know, but I guess it's,...

Dear Mary.. I seem to recall that one of your recent cor- respondents had sought advice on how to terminate unwanted telephone calls from double-glazing salespeople. May I...