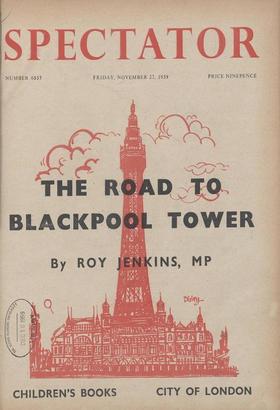 Portrait of the Week— MR. MACMILLAN told the House of

Commons what he understood were the terms of reference of the Monckton Commission, which is to advise on the new constitution for Central Africa; and a number of members failed...

W HEN subjected 4o severe shock some people gb limp; others, paralysed with fear or doubt, react like a trainee pilot in an emergency who freezes on to the controls until they...

O NE of the minor mysteries of the modern world is the presence of Portugal in NATO. According to the preamble the object of the mem- bers of NATO is to safeguard the freedom,...

NEXT WEEK BERNARD LEVIN REPORT on BLACKPOOL tives to travel with the Commission merely in order to express their dissatisfaction with their terms of reference in its report...

By MICHAEL ADAMS BEIRUT N EARLY two months after the attempt on the life of General Kassem, the Arab world still waits apprehensively for a clear sign of which way the wind is...

The Wrong Set THIEVES not uncommonly hang together, lest they should sub- sequently find themselves hang- ing separately. Three times in a fortnight the United Nations have...

The Road to Blackpool Tower

By' ROY JENKINS, MP I T is now nearly two months since Mr. Douglas Jay published his famous article. The views which he expressed, particularly on the sensitive topic of...

By T. R. M. CREIGHTON My interrogation by . . . overworked but courteous security officials . . . revealed that I was suspected of being a deep and sinister in- fluence...

By I. GREHAN A E women inferior to men? The topic crops up every other week in the newspapers pub- lished in Nigeria, soon to follow its West African neighbour, Ghana, to...

By OLIVER STEWART C ELF -RIGHTEOUS cheers ring out every time the a airline operators announce fare reductions. Expense-account and very rich passengers (you and I, we hope)...

SIR,—As a young Yugoslav democrat who, a few months ago,

obtained the right to live and work in this country, I read with pleasurable surprise the letter on October 30, dealing with the Yugoslav service of the BBC, and your comment in...

SIR, —I am afraid that economic pressure would not destroy

Franco's regime and that Mr. Gilmour is mistaken in ascribing so many of Spain's troubles to Franco; Spain was poor and priest- and police- ridden before Franco, and probably...

SIR,-1 welcome the opening of your columns to a discussion of the difficult problem of broadcasting to a country under Communist dictatorship; and having worked for a number of...

A PLACE IN THE SUN SIR,—The South African Director of

Information resents the 'highly selective' interest taken by foreigners, in what he very conveniently calls 'Union affairs.' I suggest that the following facts, taken from the...

SIR,—In his letter about the Kenya Highlands, Mr. David Cole writes that European farmers think 'that land is a national and not a racial asset and should be controlled by...

SIR,—In a journal of your high standards one finds lapses harder to bear than might otherwise be tac case. Certainly your reference to 'the extreme right- wing, aggressively...

SIR,—As a pastor I am concerned with those who may wish to be warned of the nearness of death in order to prepare for it. It may even be maintained that they have a right to...

SIR,—Most of us prepare quite long lists of Christmas presents, not only for children but also for adults. This year I am asking my adult relations and friends not to give me...

MASTER IN HIS HOUSE

SIR,—Yesterday I happened to run across the article in the Spectator of November 6 in which Sarah Gain- ham mentioned the • brave resignation of the A usiviirtiges Aont's expert...

SIR,—Your correspondent, Leslie Adrian, in his column 'Behind the Screens' (November 13), implies that there is an unreasonable early mortality in TV tubes. It is, of course,...

SIR,-1 am grateful to Mr. Anthony for correcting my statement in 'Labour's Love Lost' about Mrs. Barbara Castle and Mr. Wellington Chirwa dining at Meikles Hotel, Salisbury. I...

FROM HISS. TO VAN DOREN -

SIR,—Richard H. Rovere writes, 'There is no record of anyone having turned down an offer to take part in a rigged production.' There is. Orson Welles has recorded an offer of...

GROWTH OF A LEGEND

SIR,—How does the legend grow? On page 30 of Mr. Lampe's Pyke the ,Unknown Genius I find: An assembly of public schoolboys listened intently as Geoffrey told them about his es-...

Unconscious Intentions By ALAN BRIEN Rosmersholm. (Royal Court.)— Richard H. (Old Vic.) No work of art is ever station- 1 r ary. It cannot be framed and glazed and hung .in a...

Strong Feelings By PETER FORSTER OPrsioNs galore; feelings few and seldom. The TV camera has become like an altar before which everybody has a view- point to Jay; most of the...

A Nose is a Nose By CLIVE BARNES CROREOORAPNERS nowadays seem to be born with a suicidal streak. About half the ballets produced today should never have got to the first...

In the MACDONALD advertisement which appeared on page 727 of

our issue of November 20 the prices of Sleeping Bride and For Love or MoneY were omitted. They are Its. 6d. each.

Jokes within Jokes By ISABEL QUIGLY Persons Unknown and Char- mants Garcons. (Academy.) The FBI Story. (Warner.) —That Kind of Woman. (Metropole.) DELUSIONS of grandeur are a...

Generation of Critics BY F. W. BATESON T was lino, the honest ancient, who was nothing Id not critical; Shakespeare had apparently invented the word. And in his role of the...

A Chronicler of Science

A IIISTOItY is, we are often told, different from a chronicle—different by the measure of the selec- tion, interpretation, judgment which the his- torian applies to the past....

You know the parrot story? I mean the original. archetypal parrot story. There is an amateur con- cert, organised to pass the time, on a merchant ship fogbound in the Atlantic...

The Life and Opinions of Moses Hess. By Sir Isaiah Berlin. (Heifer, 8s. 6d.) ALTHOUGH he can claim to have originated two of the major movements of our time, Com- munism and...

Art in the Sahara

The Search For The Tassili Frescoes. By Henri Lhote. (Hutchinson, 35s.) Tics book is an account of the prehistoric rock- paintings of the Sahara and the adventures that caused...

A MINOR Victorian—complex, heroic and vulner- able : Georgina Weldon belongs to a type we still hardly know and are at a loss to judge. Her early life was submissive; after the...

By PETER GREEN Mills is really a cautionary tale for publishers. I Once upon a time, there was a Secretary of the Bank of England who wrote nostalgic stories about children—but...

Castaway with the Classics

SOMEWHERE, no matter how far from the nur- series of Brideshead Sebastian Flyte may stray, a little boy and his bear are forever playing. Even at Cambridge, if Andrew Sinclair...

Creep off the Grass

The Fair to Middling. By Arthur Calder - Marsha ll. (Hart-Davis, 13s. ad.) How ' much do children really like .4lice in Wonderland—except for incidentals, like the Cheshire Cat...

Christmas Eve on the Mountain

The Christmas Rocket. By Anne Molloy and Artur Nlarokvia, (Constable, 12s. 6d.) THE art of writing for small children is difficult and exacting; you can't fudge a picture-book...

The Cherry - Tree. Chosen by Geoffrey Grigson. (Phoenix House, 25s.). CHILDREN are rarely successfully coaxed or tempted by other people into reading poetry on their own and in...

The Duke to the Rescue

`41 Bishopsgate' By PETER H. DICKINSON L IKE most of the City, the merchant banks have had more good news in the last eighteen months than for years. The end of the credit...

By J. H. S. FRENCH Chairman, Issuing Houses Association• rrHE term 'issuing house' is peculiar to Great I Britain, where there are over fifty houses answering to this...

By DEREK MOORE N INETY-NINE articles in ninety-nine papers have been telling 999,000 people with money in the bank to put it into unit trusts. This is the hun- dredth—and the...

By C. R. LOWNDES P ROBABLY no other aspect of pension scheme planning has received wider publicity over the last decade or so than schemes designed to provide retirement...

Eating in the City

By RAYMON D POSTGATE I DIDN'T know the pre-war City. I've never worked in the City, though I've been unemployed in it, which is not the best way of investigating its eat- ing...

RADCLIFFE IN THE COMMONS

By NICHOLAS DAVENPORT BY the time this page appears the House of Commons will have de- bated the Radcliffe Report. But no matter. It has been obvious for a long time that the...

By CUSTOS T HE excellent company reports which will be coming from the consumer and consumer durable goods trades over the next few months— witness that from RALEIGH cycles and...

Craft Ebbing By KATHARINE WHITEHORN SOME time ago a client of the firm of Hardy's, renowned North- umberland makers of fishing equipment, sent them an old and battered fly' and...

Stashing the Cash By LESLI E ADRIAN DRIVE-1N banks, personal- cheque schemes, personal loans, gift cheques, the banks are on to all the tricks to pull in the people who...

SOME people, I suppose, stick to the same sherry year in year out. There's safety in familiarity, and the way that 0 sherry is made enables ship- .10 pers to produce a brand...

ACROSS 1 The foot seems to hesitate, that's fruity (7) 5 Old mice grow musical! (7) 9 Shivering cold round here in France (7) 10 Do these sportsmen really appear in these...